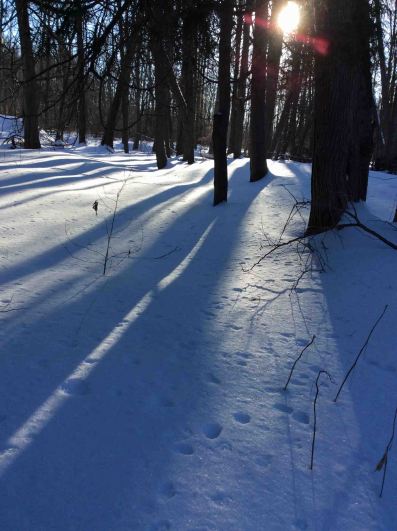 Winter in the Little Rouge woodland (photo by Nina Munteanu)

When I was growing up in the eastern Townships of Québec, my dad took us every spring to the local maple tree farm. I remember hiking through knee-deep snow among slim maples with buckets hanging off spiles leaking sap. Most trees had one tap but some wider trees had two. The thing to do was drip some sap onto snow and enjoy a “snow cone”. I preferred to drink the sap straight, enjoying its semi-sweet complex flavour. I even preferred it to the maple syrup, made by boiling the sap in the sugar shacks, and to maple sugar—which I found far too sweet and granular for my taste. I reveled in that gestalt experience of drinking fresh sap, unboiled and unprocessed, directly from the tree. Some warn that unboiled tree sap may harbor pathogenic organisms. But I didn’t know that as I blissfully consumed the subtly-sweet liquid with a mild woody aftertaste. And felt the forest’s water become my water.

ground) and phloem cells (nutrients and sugar dissolved in water) of a tree. Called sapwood, this vascular tissue is a soft layer of recently formed wood between the heartwood and the bark. Sapwood consists of actively growing cells that conduct water and nutrients (sap) from the roots to the branches of the tree. When trees are wounded in spring, sap will ooze from the sapwood out through the wound.  This is what happens when we tap a tree by placing a hole in its bark.

During the day, activity in the cells of sapwood produces carbon dioxide. The carbon dioxide releases into inter and intra-cellular spaces of the sapwood, causing pressure to build up in the cells. Along with osmotic pressure, which is caused by the presence of sugar and other substances dissolved in the sap, the CO2 helps promote a capillary movement of plant nutrients and water. When the tree is wounded, as when it is tapped by a maple producer, the pressure forces the sap out of the tree.

It turns out that tree sap—particularly sap from a maple, birch or walnut tree—is extremely good for you and now considered by some as the most valuable product you can get out of a tree. The minerals, nutrients, enzymes, and antioxidants in maple sap provide a power drink that tastes delightful. Birch sap also contains saponins, compounds that have powerful cholesterol-reducing properties. 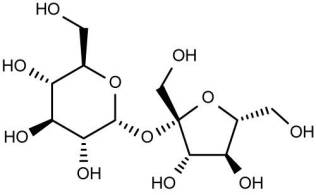 Depending on the tree species, sap will contain varying levels of sugars, mostly sucrose. According to WildFoodism.com the sap of the sugar maple (Acer saccarum) is about 2% sugar. Sap also contains vitimins, minerals, enzymes, amino acids, polyphenols and other health-promoting compounds.

Some impressive health benefits of Maple and birch sap include:

Combats osteoporosis-like symptoms: sap from Acer mono contains 16 times the potassium, 37 times the calcium, and 3.9 times the magnesium contents of spring water.  All 3 of these minerals are essential for optimal bone health.

Prevents gastric ulcer formation: WildFoodism.com writes that Injury to the mucosal lining of the stomach can lead to stomach ulcers.  Common causes include infection by the bacteria Helicobacter pylori, long-term use of nonsteroidal anti-inflammatory drugs (NSAIDs) such as aspirin and ibuprofen, and excessive consumption of alcohol.  If stomach ulcers are left untreated, they can eventually lead to gastric cancer. Experiments demonstrated that maple sap was more effective than L-arginine and omeprazole in protecting against gastric mucosal lesions. The mechanism behind maple sap’s protective effects seems to be related to its ability to significantly lower the mRNA expression of iNOS and nNOS, two enzymes that have been shown to play key roles in the formation of gastric lesions.

Contains antioxidants: antioxidants in sugar maple sap combat the process of oxidation (which can eventually result in atherosclerosis, diabetes, and Alzheimer’s disease, to name a few). The antioxidants scavenge the superoxide radical—a potentially destructive molecule.

While I never stopped to consider this when I was young, my adult ecological training suggested something else to me: if drinking sap directly from a tree is so beneficial then by inference, isn’t simply being near a tree beneficial too? The water vapour in the air near a tree—literally the tree’s version of sweat—would also contain many of the beneficial compounds as tree sap. And we breathe in this vapour with each inhale. In fact, this is shown to be true.

I talk more about this in Part 2 of the series—Why I Love Trees: Part 2, Breathing Trees.

This article is partly excerpted from Nina Munteanu’s “Water Is…” (Pixl Press). Read more about the book here.

9 thoughts on “Why I Love Trees: Part 1, Drinking Trees”