The solid form of water—ice and snow—isn’t on most people’s minds—unless you live in the north-temperate region or high north and it’s winter. Here, in Canada, we face this form of water for close to six months of the year. You could say we have a long-lasting intimate relationship with it.

Canadians have a lot of time to ponder the splendid nature of solid water; from chilling blizzards, snowstorms and ice-storms to dripping icicles, street slush and snowball fights. Here in the north, ice and snow dance a tango with the wind and the cold; shifting their forms so that, at times, we don’t know which is which. Rime, hail, sleet… We get it all. Sometimes at the same time.

One mild winter evening in Toronto, the rain drizzled down—Vancouver-style—over a thick snow base; then it froze into a thin layer of ice. By morning the icy layer had melted and frozen again into a brittle-filo sheet resembling plastic; it wrapped the rough snowy hills in a glistening sheet. Smooth and shiny. And otherworldly. Even rowdy school children left the ice-drifts alone; recognizing a new and special work of Nature-art.

I currently live in a city suburb where icicles form rows of dripping stalactites from roof eaves. At the University of Toronto, where I teach writing, physicist Steven Morris is studying how and why these amazing things form. You can read more about his findings in my book “Water Is…” scheduled for release in May 2016.

Saint Sebaldus, patron saint of Nurenberg, is traditionally invoked for protection against 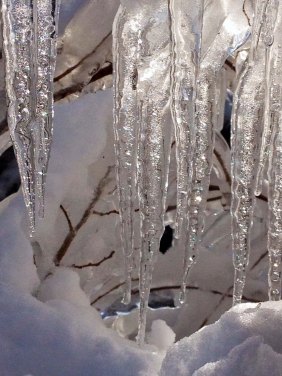 the cold. One miracle credited to him is known as the “miracle of the icicles.” In his book Lives of the Saints, Reverend Alban Butler recounts the following story: Saint Sebald took shelter in a peasant’s cottage one cold, snowy night. He found the fire low and the home as cold inside as outside. The peasant lamented that he could not afford fuel for the fireplace. Saint Sebald turned to the wife and asked her to bring in a bundle of the icicles that hung from the eaves. She did and Sebald threw them on the fire. They blazed up wonderfully. The miracle of the icicles is depicted in relief on the base of Saint Sebaldus’ shrine at the church of Saint Sebaldus in Nurenberg, Germany.

Here are some interesting ice facts:

Ice was harvested for years before the advent of Freon-based refrigeration in the early 1900s. Although, ice-making machines existed by the mid- to late-1800s, these were mostly restricted to commercial operations such as beef packing plants and to keep dangerous chemicals cold. Ice was harvested using ice picks and saws, together with horses that pulled huge ice plows. Ice was then barged or horse-driven to an icehouse. Ice was shipped worldwide and by the turn of the century, iceboxes were as common in North American homes as electric refrigerators are today. Despite the ubiquity of home-freezers, commercial ice production remains in high demand.

Ice as building material is not common, even in the northern temperate or high north. While igloos remain a form of shelter for hunting Inuit, the traditional art of building them is diminishing. Meantime, various innovative ice structures are being created: from ice piers in Antarctica’s McMurdo Sound to ice hotels in the Arctic Circle.

Ice density and ice hardness are two different things. While you wouldn’t think to punch a block of ice because it is so hard, the density of that ice block is lighter than its liquid form. That’s why ice cubes float in your drink and a lake doesn’t freeze completely. Water also expands when it freezes (the reason that standing water in the pipes of your house will cause them to burst if it freezes). Essentially, as water freezes, it retains the same mass while it takes up more space—about 9% more. Water molecules are spaced out farther in solid than in liquid form. Water reaches its maximum density at 4 degrees Centigrade as a liquid, which allows a lake with sufficient depth to not freeze completely; a key feature for sustaining aquatic life. As water cools from the surface down, once it reaches 4 degrees, it will sink to the bottom, leaving only the surface to freeze and float over the slightly warmer, denser water.

Sixteen different types of ice have been documented by scientists. Different properties manifest according to variations in atmospheric pressure and temperature. Major differences lie in the structure of the crystals. For instance, Ice Ih is normal hexagonal crystalline ice, the natural ice of the biosphere. Other forms include rhombohedral, tetragonal, cubic, and orthorhombic structures. Ice XI is ferroelectric, exhibiting electric polarization that can be manipulated and reversed. Ice V contains the most complex crystalline structure. Ice III is actually more dense than liquid water. Amorphous ice shows no crystalline structure. Found in space, this solid form of water is actually classified as a mineral.

Ice is slippery even when the temperature around it is also below freezing. Because ice is less dense than liquid water, surface molecules of ice that are in contact with air do not bond to the mass of molecules within. The surface molecules retain liquid properties while being solid ice. This fourth phase of water is known as crystalline-liquid or a “liquid crystal”. These interfacial water molecules behave as a separate thermodynamic system from the bulk water/ice; they exhibit “delayed coalescence.” 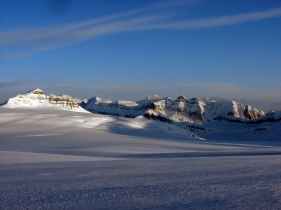 Over 99% of the freshwater ice in the world is located in two places: the 5.4 million square mile ice sheet covering Antarctica and the slightly smaller (656,000 square miles) sheet on Greenland. Ice glaciers cover about 10% of the Earth’s surface and three quarters of the world’s freshwater is locked in them. Seasonal glacial runoff provides an important source of freshwater as glacial melt. Glaciers flowing from the Greenland Ice Sheet move at speeds of up to ten kilometers per year or more, and most have been rapidly retreating since the 1990s. These glaciers are the main source of icebergs, along with the ice caps and ice fields of Devon and Ellesmere Islands.

Ice core drilling in the Greenland Ice Sheet—which covers 80% of that land mass and comprises the world’s second-largest body of pure ice after Antarctica—is providing insight on how hot surface temperatures were during the last interglacial warm period before our current one. Scientists hope to gain further insight on how the planet coped with the previous climate change. The earliest known ice age occurred 2.3 billion years ago.

Icebergs, pieces of ice that float on the ocean or a lake, form when chunks of ice calve from glaciers or ice shelves. Chunks are known as bergy bits or growlers if they are smaller than 5 meters across. In 2000, entrepreneurs in Newfoundland attempted to market “iceberg water” to process vodka, beer and drinking water.

Ice exists everywhere in space. Water is the

second most common molecule in the universe and has been discovered virtually everywhere from our own sun to black holes 12 billion light years away. Much of that water is in the form of ice; notably Mars and Mercury, and the icy moons of Jupiter and Saturn (Ganymede, Europa, Callisto, Titan and Enceladus). Scientists believe that most, if not all, of the water on Earth came from ice-bearing comets and asteroids some 4.5 billion years ago. Given life’s dependency on water, even in its solid form water may indicate the existence of extraterrestrial life. Life has, after all, been discovered thriving under ice shelves of the Antarctic.