The Many Faces of Water

When I was a child growing up in the Eastern Townships of Quebec, I thought I would be an artist when I grew up. I drew and sketched and painted every day. I told stories with my art. I created graphic novels, and populated them with superheroes travelling in the Universe on great adventures. I wasn’t a very good swimmer and the power of the sea both frightened and thrilled me. I witnessed the mercurial nature of water, both as a child playing in freshwater lakes and rivers and later as an avid boater on the Pacific Ocean of the coast of British Columbia.

Fascinated with water in its many forms, I used to stare for long periods of time at the turbulent flow of a stream or river and the cursive lap of waves on the shore of a lake. While my older brother and sister were out swimming, I was staring and studying—and drawing. Apparently, I wasn’t the only one. The artist and polymath Leonardo da Vinci was fascinated with eddies and vortexes. He sat and stared for hours—enthralled by the turbulent motion of water—not to see things more sharply, but to stop seeing, to transcend the limitations of his eyes. A Neo-Platonist, da Vinci wished to understand flowing water by essentially “entering” into its rhythmic movements. 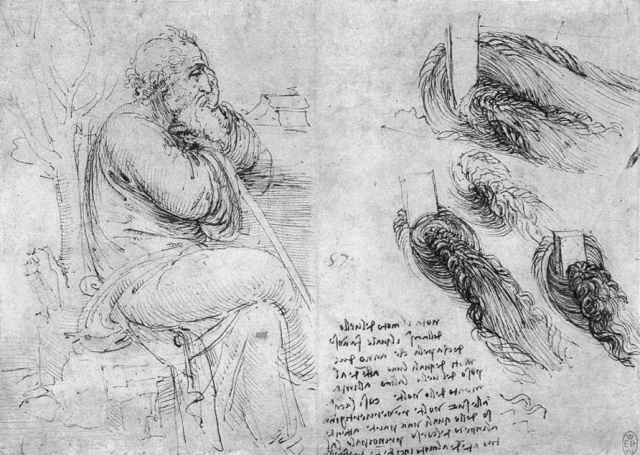 Da Vinci integrated art, science and design in an empirical systematic and visual approach to gain knowledge about the natural world—to see the world as an integrated whole, “making a perceptual shift from the parts to the whole, objects to relationships, quantities to qualities,” writes physicist Fritjof Capra, author of The Science of da Vinci. Da Vinci’s approach to scientific knowledge was the approach of a painter. “Painting,” he said, “embraces within itself all the forms of nature.” Da Vinci understood nature’s fractal self-similar qualities; that the part reflected the whole and the microcosm was similar to the macrocosm. Unlike Bacon and Descartes, who would later describe nature mechanistically and something to dominate, da Vinci wished only to study her; he was in awe of Nature’s beauty and ingenious design. Da Vinci was, like Goethe, a deep ecologist (with an eco-centric view in which humanity is not separate from Nature).

He was the original student of biomimicry (the science that studies and mimics Nature’s design): “The virtues of grasses, stones, and trees do not exist because humans know them … Grasses are noble in themselves without the aid of human languages or letters.” Nature as a model and mentor is being rediscovered in the practices of ecological design and biomimicry, Capra tells us. “Like Leonardo, eco-designers today study the patterns and flows in the natural world and try to incorporate the underlying principles into their design processes. This attitude of appreciation and respect for nature is based on a philosophical stance that does not view humans as standing apart from the rest of the living world, but rather as being fundamentally embedded in, and dependent upon, the entire community of life in the biosphere.” 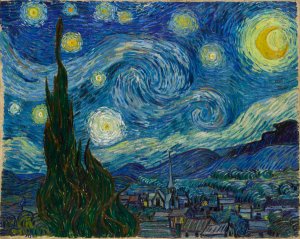 The impressionist artist Van Gogh possessed an intuitive grasp of turbulence in nature (particularly during the most unstable period of his life when he had checked himself into an asylum); this enabled him to paint eddies of motion with scientific accuracy.

Water, whether lake, river, marsh or sea, features prominently in many of our great artists’ works. How it is portrayed speaks to the temperament, culture and beliefs of an artist and, ultimately, his relationship with water. Great artists share that relationship with us: Becalmed off Halfway Rock, the classical serene seascape of Fitz Hugh Lane; the fearful power of the sea in The Ninth Wave by Ivan Aivozovsky; the icy death of Frederic Edwin Church’s The Icebergs; Claude Monet’s cheerful La Terrace de Sainte Adresse; William Turner’s audacious and avant-garde The Fighting Temerarie.

The Ninth Wave by Ivan Aivovsky

In 1830, the Japanese artist Hokusai painted The Great Wave. One of the most recognized works of art from Japan, it depicts a large rogue wave or okinami (wave of the open sea) off Kanagawa with Mount Fuji (considered sacred and a symbol for beauty) in the background. Edmond de Goncourt suggested that the giant wave was a deification of the sea by a man who lived with the terror of the overwhelming ocean that completely surrounded his country.

The Great Wave by Hokusai

Hokusai “is impressed by the sudden fury of the ocean’s leap toward the sky, by the deep blue of the inner side of the curve, by the splash of its claw-like crest as it sprays forth droplets.” The writer Andreas Ramos writes of the painting: “The waves form a frame through which we see the mountain. The gigantic wave is a yin yang of empty space beneath the mountain. The inevitable breaking that we await creates a tension in the picture. In the background, a small wave forming a miniature Fuji is reflected by the distant mountain, itself shrunk in perspective. The little wave is larger than the mountain. The small fishermen cling to their fishing boats that slide on a sea-mount, looking to dodge the wave. The violent Yang of nature is overcome by the yin of the confidence of these experienced fishermen. Strangely, despite a storm, the sun shines high.”The image, while simple in design, was the result of a long process of methodical reflection. Every object was drawn using the relationship of the circle and the square.