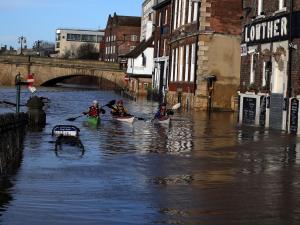 The moniker of modern and postmodern era cities has been to cut down trees and engineer “efficient” sprawling cityscapes across veined flood plains—with total disregard to the natural flow of water. Modernist and postmodern architects and engineers “vanquished” Nature, trained the water and sealed the natural environment—vegetation, soil and groundwater—beneath a cap of asphalt, cement and other impervious surfaces. Large rivers and their tributaries—perceived as simple conduits of surface water—were forced into channels that collected and brought water where it was needed—usually in efficient straight lines (not the natural flow of water). Unwanted water puddles were efficiently removed through regarding and channelization. Everything made neat and tidy.

The intimate connection of water to its landscape, vegetation and great canopies of trees that once absorbed seasonal torrential rains was not recognized. Groundwater’s need to recharge and its role as a filter was not recognized. The role of the water cycle in the wellness of humanity and our entire planet was not recognized. It is this cycle that the post-modern city has interrupted. With great cost.

Perhaps one of the greatest failings of our school system is that we do not learn this great lesson: that the entire water cycle—from regional to global—intimately connects sea to air to land and ground. Disturb one aspect of that cycle and you disturb the entire cycle. That’s what a cycle is: a Whole made of wholes; all connected in a single operating system. There is perhaps no place where we interrupt that cycle more than in the very heart of our cities.

Urban runoff is any kind of surface runoff of rainwater created by urbanization. Mostly in the form of contaminated storm water runoff, it is a major source of urban flooding and water pollution in urban communities worldwide; urban runoff is also recognized by governments as the leading source of water quality problems in urban settings.

Urbanization changes the local hydrological cycle, mostly through decreasing natural vegetation cover and by increasing impervious surfaces. The effect is catastrophically compounded: 1) as infiltration (and filtration) of water into groundwater decreases—because it can’t get there or it rushes too fast across hardpan—the groundwater aquifer doesn’t recharge; 2) less vegetation to softly absorb rainwater results in shorter travel time between water phases and less evapotranspiration back into the atmosphere. These increase the volume and intensity of runoff while decreasing groundwater recharge. It’s as if the frenzied urban pace of has spawned a frantic water pace.

Trees make rain. Less trees; less rain. And when it comes, it’s unruly, overwhelming the capacity of a city’s drainage systems and causing flash floods, storm surges and overbank flooding. Impervious surfaces (like rooftops, streets, parking lots and driveways) promote floods and lower the water table. Water rushes like a banshee on a rampage; the city with literally in a drought-flood scenario. Most municipal storm sewer systems discharge untreated storm water to streams, rivers and bays. The excess water can also flow into people’s properties through basement backups and seepage through building wall and floors.

Runoff from impervious surfaces picks up gasoline, motor oil, heavy metals, trash and other pollutants from roadways and parking lots. Polycyclic aromatic hydrocarbons (PAHs), are combustion byproducts of gasoline and other fossils fuels. Heavy metals such as nickel, copper, zinc (from galvanized gutters), cadmium, and lead are often part of urban runoff. Lawns, parks and golf courses may also leach fertilizers, such as nitrates and phosphorus, and pesticides. Runoff will also pick up sundry pollutants, including sediments, from poorly maintained construction sites, undermining the health of the water systems that ultimately receive them. Effects include smothering of bottom-dwelling biota, eutrophication from increased nutrients and reduction in oxygen with consequences to fish and other biota. 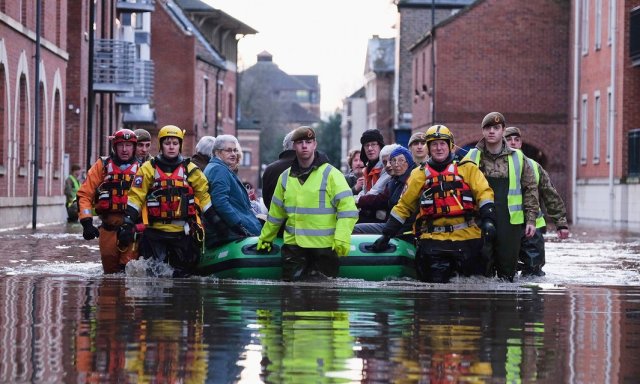 Recent floods in urban settings in the UK and elsewhere suggest a need for better urban water and flood management. Ironically, hydrologists and ecologists now argue that to “calm the unruly urban waters” requires less “big engineering to hurry flood water away downstream” than allowing Nature a freer hand to slow flood waters upstream of urban areas. In his December 2015 letter to the Guardian, Dr. Ewan Wakefield of the University of Glasgow discusses the need to “rewild the landscape.” Replanting native woodland and reintroducing keystone species, such as beavers, would go a long way toward calming those waters, wrote Wakefield. The key is, of course, to reinstate a landscape’s ability to absorb rainwater.

The extent to which cities are making natural infrastructure an integral part of their water management plans is new, says Katie Arkema, senior scientist at the Natural Capital Project, a Stanford University, University of Minnesota, Nature Conservancy, and World Wildlife Fund initiative and think tank. “Around the world — from Melbourne, Australia, to China’s innovative “sponge cities” to coastal cities in New Jersey and Belize — urban planners are expanding natural stream and wetlands hydrology and ecosystems such as dunes, mangrove forests and coral reefs to better protect communities,” writes Erica Gies in the October 14 2015 issue of Corporate Knights. 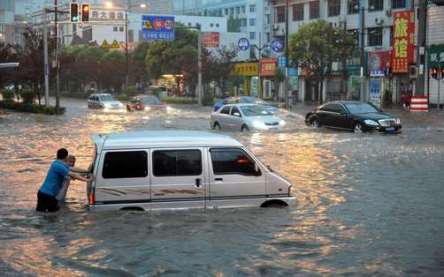 Flooding in an urban centre in China

“Natural or green infrastructure is more resilient to water stress over human-engineered infrastructure because it is biologically flexible; it bends, rather than breaks,” continues Gies. The goal is to create a system that “functions as a living organism,” says Tony Wong, an early advocate of green infrastructure and founder and CEO of the Cooperative Research Centre for Water Sensitive Cities in Australia. Green infrastructure “mimics the functions of forests and wetlands and open spaces to serve and cleanse our cities,” he says. “It’s a reversal from the 20th century model that collected rain in detention tanks and lined rivers with concrete to move water away from built infrastructure as quickly as possible,” says Gies. “That approach cut off rivers from their floodplains, raising water levels. And because concrete systems don’t flex, when they were inundated disaster struck.”