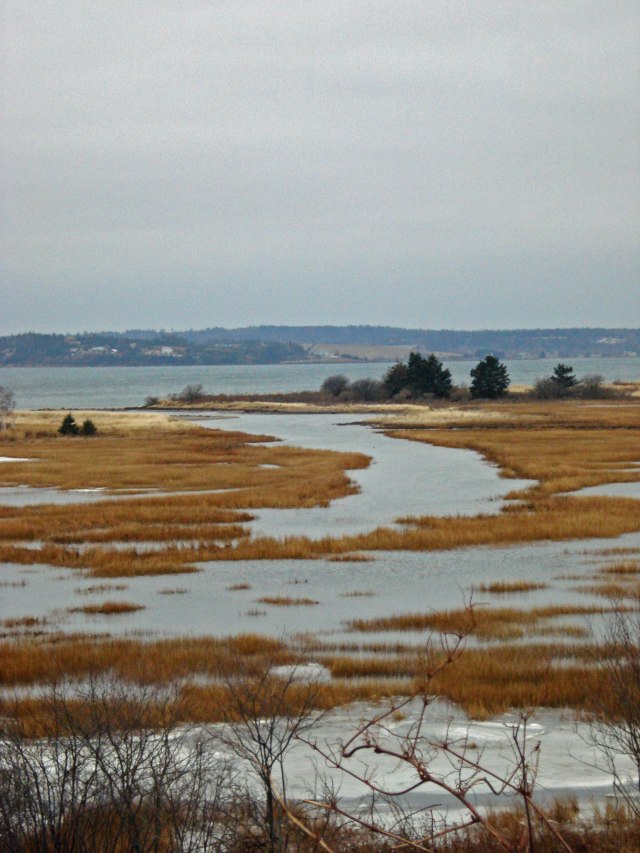 The ecological term ecotone describes that place where two opposites or polars—such as fluids flowing in different directions—meet and are changed by that meeting. An ecotone is the transition zone between two overlapping systems. It is essentially where two communities exchange information and integrate. In 1905, Clements described ecotones as “tension zones” with increased productivity between plant communities. According to limnologist George K. Reid, an ecotone “constitutes a ‘buffer’ zone between two communities.” An example would be an estuary, which exists between the freshwater ecosystem of a river and the saltwater ecosystem of the open ocean. Estuaries are dynamic transition zones that provide opportunities for greater diversity and interaction. Ecotones typically support varied and rich communities, representing a boiling pot of two colliding worlds.

For me, this is a fitting metaphor for life, given that the big choices we must face usually involve a collision of ideas, beliefs, lifestyles or worldviews: these often prove to enrich our lives the most for having gone through them. Evolution (any significant change) doesn’t happen within a stable system; adaptation and growth occurs only when stable systems come together, disturb the equilibrium, and create opportunity. Good social examples include a close friendship or a marriage in which the process of “I” and “you” becomes a dynamic “we” (the ecotone) through exchange and reciprocation. Another version of Bernard Shaw’s quote, above, by the Missouri Pacific Agriculture Development Bulletin reads: “You have an idea. I have an idea. We swap. Now, you have two ideas and so do I. Both are richer. What you gave you have. What you got I did not lose. This is cooperation.”

Ideas, like love—like water—are never lost when given away. They just transform; then they return to you in another form.

All ecotones provide opportunity for sharing of information, discovery and change. Ecotones are the synergistic blending of two ideas in the evolution of science. They are the vortex energy of a stream’s eddy currents generated by the meeting of interfaces and boundaries. They are the stable, coherent domains—the glassiness—of polarized interfacial and intracellular water in cells and tissues.

Interfacial water is ecotone water. It was described in the late 1940s. Four years after the end of the second world war, J.C. Henniker published an important review paper about the long-range effect of varied surfaces on many liquids, including water. Henniker had cited evidence for long range impacts extending over thousands or even millions of molecular layers, surpassing the ordering of tens of molecular layers described by cell biologist Gerald Pollack in his 2001 book Cells, Gels and the Engines of Life.

According to water scientist Martin Chaplin, most if not all water in living organisms is interfacial water, given that it is almost never further away from surfaces, such as membranes or macromolecules, for more than a fraction of a micron. “Interfacial water molecules at the gas–liquid surface have a strong attraction towards the bulk liquid causing a high surface tension,” writes Chaplin. “Liquid water at liquid–solid and liquid–gas interfaces behaves as a separate thermodynamic system from bulk water.”

In the 1960s, physiologist and Nobel Laureate Albert Szent-Gyorgyi proposed that water in living organisms exists in two states: the ground state and the excited state. Water at interfaces such as cell membranes exists in the excited state, which requires considerably lower energy to split. This property of water enables energy transfer to take place in living organisms, ensuring long-lasting electronic excitations. Szent-Gyorgyi’s ideas were largely ignored by the scientific mainstream at the time.

Gerald Pollack and his research team at the University of Washington demonstrated the existence and properties of interfacial water using a hydrophilic gel and a suspension of microspheres just visible to the eye. Pollack showed that interfacial water that forms on the surface of the gel excludes the microspheres and other solutes, such as proteins and dyes. Pollack named this region an “exclusion zone” (EZ) and noted that its formation depended on fixed charges on the gel, aligning with Szent-Gyorgyi’s prediction. Pollack found EZ water to be about ten times more viscous as bulk water; and, it shows a peak light absorption at 270 nanometres and emits fluorescence when excited by light at the same wavelength.

Del Guidice and his colleagues suggest that EZ water is a giant coherence domain (CD) stabilized on the surface of the attractive gel. As Szent-Gyorgyi predicted, EZ water forms inside the cell on membrane and macromolecule surfaces. The “excited” coherent water easily transfers electrons to molecules on the cell’s surface. The interface between coherent interfacial water and normal bulk water acts like a battery, re-charged by incident radiant energy and resembling photosynthesis.

Epitaxy describes the transmission of structural atomic information from the surface of one material (usually a crystalline solid) to another (usually, but not always, a liquid)—without transferring any of the material. Information, not material, is transferred. While this may seem bizarre, examples of epitaxy are well known and used in everyday technologies in materials science. Materials scientist Rustum Roy provides the example of cloud seeding to make rain. “The seeding of clouds is epitaxial growth of crystalline-ice on a substrate of silver iodide (AgI), which has the same crystal structure. Information and “memory” are transmitted from the seed or substrate to adjacent layers of the liquid phase, which can completely control the structure of what is formed from it. No chemical transfer whatsoever occurs.”

“By providing a specific structure as a template (usually solid but sometimes liquid), one can induce an entire body of liquid (or even solid) to precipitate or crystallize in a pre-selected structure or morphology,” says Roy, who suggests an epitaxial basis with homeopathy.

In 2005, Neogi and Bharadwa reported that a molecular backbone can cause water molecules to form a “thread” that can snake its way through the more open space of the larger molecules. Water can exhibit a highly organized local structure when it interacts with molecules capable of imposing these structures on it. According to Roy, structure is transferred by epitaxy, with no presence of the controlling phase. This explains the success of homeopathy—which uses zero concentration of solute through successive dilution—given that it is the structure not the composition that exerts the effect.

Homeopathy, Roy tells us, relies on “active agents” changing, affecting or “imprinting” the liquid structure. The homeopathic solution is prepared through multiple serial dilution steps, each followed by multiple succussions (vigorous shaking or turbulence) to generate pressure and nano-bubbles that catalyze a system-wide, hierarchical and self-organized form.

Some homeopathic researchers have proposed structural models analogous to the Roy model. These involve aggregations or clusterings of water molecules, possibly seeded by the presence of molecules such as clathrates or zwitterions from the original source substance. Clathrates are lattice-like substances that trap molecules. The International Union of Pure and Applied Chemistry (IUPAC) describe them as “inclusion compounds in which the guest molecule is in a cage formed by the host molecules or by a lattice of host molecules.” Zwitterions are hybrid molecules with a positive and negative charge, making them neutral. Amino acids are the best-known example. The Roy model of water structure combines epitaxy, nano-bubbles and pressure effects. Other researchers have also proposed the involvement of a coherent electromagnetic radiation field within the solvent that contributes order to molecular motion. Del Giudice’s concept of “super-radiance” or “coherence” in an electromagnetic field of molecular structural elements also reflects the Roy model, which includes epitaxy, for water structure.

Quartz crystals share a similar molecular geometry as water and can apparently convey structural information to water through epitaxy. Quartz is the most abundant mineral on Earth. Used for centuries to improve water quality, it is still used today in many filtration systems. Marcel Vogel, the IBM scientist who developed liquid crystal technology, discovered that many of the unique qualities of crystals resulted from their ability to organize and direct energy. He found that quartz crystals act as resonators, transducers, and amplifiers of vibrational energy. Quartz crystals also emit piezoelectric current in water, which helps generate water’s basic structure.

According to Roy, water molecules aggregate or cluster in a self-organized way. “We must know how it is arranged,” says Roy. “It is like the alphabet. If I give you the alphabet, you don’t know a word, you don’t know a letter or a sentence … The molecular structure is the alphabet of water …You must make a sentence out of [water’s alphabet] and you can change the sentence.” In this way, water stores information and communicates it. “If you consider a cluster as a group of specific molecules, then it can survive only a short amount of time. But if you consider it as a structure whereby molecules can leave and other molecules come in, the cluster can last effectively for a very long time. The stability of the cluster structures confirms the hypothesis that water is capable of recording and storing information.”

Dr. Vladimir Voeikov, professor of the Biology Faculty of the Moscow State University, Russia, tells us that, “Every seed, every embryo begins its life exclusively in water. Amniotic fluid plays a role in an embryo’s development in preservation … it is the surrounding water, like a universal computer, that reveals any biological program and thus water is also the only thing that can change it.”

Clegg, J.S. 1984. “Properties and Metabolism of the Aqueous Cytoplasm and Its Boundaries.” The American Journal of Physiology 246: 133–51.