The Memory of Water: the World in a Drop

“A drop of water is a universe unto itself.” —Paolo Consigli 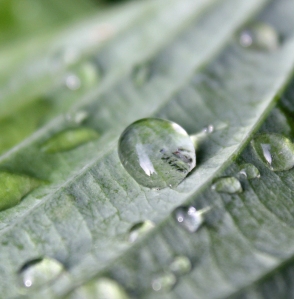 “Memory is a widely defined concept,” writes Dr. Bernd Kröplin in his 2005 book, Welt im Tropfen: Gedächtnis und Gedankenformenim Wasser [The World in a Drop: Memory and Forms of Thought in Water]. Memory is a concept “not restricted to higher life forms only.” In fact, he tells us, “it is not restricted to living beings at all.” Many inanimate things, not just computers, display properties of memory, adds Kröplin. Erosion, oxidation, aging and radiation are all phenomena that display memory: a change that provides information about the history of a substance. Smart materials are adaptive materials that carry memory. Metallic “shape–memory” alloys can remember shapes they have taken on earlier and reconfigure once activated by the same influence. This ability, Kröplin shares, results from the austenite–martensite (steel crystalline structures) conversion of the crystal structure of the metal.

Substances can also forget, Kröplin writes. Forgetting occurs through some form of reorientation of the structure; for instance through a strong increase in temperature, leading to the disappearance of residual “stresses” in the original structure of the material. Kröplin suggests that this concept can be applied to water, its crystalline form and its changing states.

While researching a bio-energetic medicine for use in outer space, Dr. Kröplin discovered one of water’s many anomalies: low field strengths, which are not detectable with the usual techniques, show up in water and can be viewed under the microscope and photographed. At the Institute for Static and Dynamics in Aerospace Constructions, University of Stuttgart (ISD), Dr. Kröplin subjected water to ultrasound, music, and mobile radiation; then he observed dried water droplets under dark field microscopy. The drops indicated unique patterns according to each treatment. An intuitive researcher, Kröplin demonstrated a connection between the subject and the object of an experiment, using different students in his drop tests. Using different water sources and different students, he showed that the variation in pattern was significantly less for the student over the source. When he placed a particular flower in water, the drops revealed its unique signature. A different flower revealed its own unique signature and distinctive pattern. Kröplin’s experiments and his observations reflect the findings of Roy, Chaplin, Benveniste and others about water’s ability to record, store and transmit information.

Kröplin talks about the Rhine figuratively, likening its system to a quantum computer: the water picks up information as it flows downstream and has more information at its mouth than at its source, says Kröplin. In such a scenario, “The world’s oceans would no longer separate us; but, instead be a giant storehouse of information, and the rain a data medium carrying information to the world.”

The Faces of Memory

In 1939, Semyno Kirlian accidentally discovered that if an object on a photographic plate received a high-voltage charge, a radiating image was produced on the photographic plate. Essentially a captured “coronal discharge”, the electrograph or bioelectrograph was later used by both mainstream science and frontier science to describe biofields and other phenomena of conducting objects.

Photon energy can be seen under dark field photo-microscopy and is considered by some to indicate life force (as biophotons). Appearing as bright spots of light against a dark field, biophotons have demonstrated healthy versus unhealthy systems. Met with skepticism, the method has been successfully used by biophysicist Fritz-Albert Popp and quantum physicist Konstantin Korotkov, and many practitioners of energy medicine.

Energy medicine forms a large part of complementary and alternative medicine (CAM), writes Dr. Beverly Rubik, a medical doctor and practitioner of CAM in the USA. Energy medicine typically involves low-level energy field interactions and include: human energy therapies, homeopathy, acupuncture, magnet therapy, bioelectromagnetic therapy, electrodermal therapy, and phototherapy, among others. Rubik acknowledges that many of these CAMs challenge the dominant biomedical paradigm, given they cannot be explained by current biochemical methods. Rubik suggests that biofield phenomena may act directly on molecular structures, changing their conformation and functionality in significant ways. They may also transfer bioinformation within the energy field of life known as the biofield.

“The concept of an organizing field in biology and medicine evokes shades of vitalism, an old philosophical concept in the West from the 1600s that was overthrown in nineteenth-century science,” says Rubik. “In this view, the essence of life is seen as a metaphysical, irreducible life force that cannot be measured. Indigenous systems of healing, such as Ayurvedic and Chinese medicine, and modern modalities, such as chiropractic, rest on concepts of a vital force or subtle life energy that is central to healing. Called by many names, including prana in Ayurvedic medicine and qi [or chi] in Chinese medicine, these indigenous terms go back thousands of years. They may actually refer to something similar to the present-day concept of the biofield, which is, at least in part, based on the electromagnetic field theory of modern physics but, in principle, might also include acoustic and possibly other subtler energy fields not yet known to science.” Biofield therapies, which incorporate notions of universal life energy, include Reiki (a form of spiritual healing from Japan), qigong therapy (from China) and many others. Like dowsers, biofield therapists may also assess imbalances in the human biofield either with their hands or intuitively.

Rubik argues for a synergistic application of viewpoints on life and in therapeutic treatment. On the one hand, one could compare the organism to a crystalline structure of ordered biomolecules, says Rubik. “On the other hand, the essence of life is more similar to a flame,” she adds, “burning matter into energy and dancing not only with organized vitality, but also with an element of unpredictability or chaos. Both views,” she suggests, “may be necessary to describe life in the same way that, in quantum physics, both a particle view and a wave view are necessary to describe fully the nature of light, as well as matter at the smallest scales.”

Rubik argues that, as with the principle of complementarity that requires a description of both wave and particle properties; an energy field view may complement—rather than antagonize—the conventional biomolecular view. “The brain, for example, can be analyzed in terms of the receptors, neurotransmitters, ion channels, and so forth that help explain neuronal firing; or it can be viewed in terms of the oscillations of its neuronal circuits and the magnetic and electrical fields of its continual activity, with possible regulatory feedback from the fields themselves.”

Rubik describes two existing schools of interpretation of biophoton emissions, one reflecting a reductionist mechanism (e.g., chemiluminescence school) and the other vitalism (e.g., biophysical school). The biophysical approach maintains that the organism receives and relays a particular range of electromagnetic frequencies or biophotons that are coherent (in phase) and are used for communication, growth, and regulation in the living state. From results by Frohlick in 1968, we also expect long-range, coherent interactions in living systems, which harmonizes with the work and findings of Rupert Sheldrake, Mae Wan Ho, David Bohm and many others.

Russian physicist Konstantin Korotkov developed a Gas Discharge Visualization (GDV) camera, based on Kirlian photography (images of high-frequency electric discharge) to observe biophotons discharged by biofields. Any conductive object (such as living tissue) when placed on a plate made of insulating material (such as glass) and exposed to high-voltage/high frequency electricity, will emit a halo of coloured light. The greater the energy the object possesses, the brighter it shines.

Already known for his work with human bioenergy fields using high-voltage electrophotography, Korotkov used his GDV machine to measure the energetics of water. He travelled to the area of Mount Roraima in Venezuela, where some of the highest waterfalls in the world flow from the top of the mountain. Korotkov compared the uber-pristine Roraima headwaters to the drinking water in Saint Petersburg, Russia, and found significantly more energy in the Roraima water.

In 1996, Dr. David Schweitzer developed a fluorescent microscope using a light temperature of 732 nm through which he observed small light bodies (e.g., biophotons or somatids, presumably found in all life-fluids) that could be directly influenced by positive and negative emotions. He showed that the biophotons of cells responded with greater luminosity in the presence of positive thoughts. Schweitzer’s work suggested that water acted as a liquid memory system that could store information. In an interview in Shared Vision Magazine, Schweitzer shared his observations of blood expressing different forms based on various scenarios. Schweitzer observed that blood cells expressed themselves with a language based on sacred geometry, colour and harmonious shapes. He hypothesized that water was the medium that helped transmit information from one area of the brain to another. Based on Einstein’s concept of somatids (particulate light bodies), Schweitzer created the conditions necessary to make them visible and then to observe how they changed in response to thought and other environmental influences. Schweitzer observed that the somatids became more intense in the presence of positive thought, particularly faith.

In the 1990s, Japanese researcher Dr. Masaru Emoto developed a method to freeze water samples and then photograph the resulting crystalline form using a microscope at x500 amplification. In 1999, he published a collection of photographs of water crystals in a book, The Messages of Water. The water crystals are stunningly beautiful. Emoto’s photographs showed how the crystals varied greatly according to water source and water quality.

An intuitive researcher, Emoto one day whimsically exposed the water he was testing to music and found that the crystals differed according to musical form. Emoto also used intentions and words on paper—arguing that words, even on paper, carry a unique vibration, and that water incorporates these in its structure as a kind of “memory.” Emoto contended that positive changes to the water crystals could be attained through prayer, music and words of gratitude, appreciation and love. Emoto and his telling crystals have since become known worldwide for the story they tell about water’s changing structure. Emoto’s research techniques have been criticized for human error and for using insufficient controls. Emoto acknowledged that he was not a scientist; yet his work and observations appear to harmonize with emerging research by frontier scientists on water’s ability to act as a liquid memory store: these include Russian researcher Leonod Izvekov, Canadian scientist Dr. David Schweitzer, German scientist Dr. Bernd Kröplin, Austrian researcher Alois Grüber, and others.

Effe Chow, member of the Executive Council on Alternative Medicine, USA, tells the story of attending an outdoor wedding in Ontario. The rain started to come half an hour before the wedding and, as it started to rain, all the umbrellas went up. Chow and three of her students decided to meditate for better weather: within a minute, the clouds opened up and the sun shone down in the immediate area like a spotlight. While I cannot claim having participated successfully in such an endeavour, when I worked in rainy British Columbia as an independent environmental consultant, I acquired a reputation for “ordering up” sunny days for my field trips.

Memory streams in a braided and recursive path, meandering ouroboros-like toward itself. Memory stirs up sediments that have lain for eons; re-suspending, re-examining, as if new. Then cascading toward the abyss of truth and paradox. The collective. The great ocean of thought.

McTaggart, Lynne. 2008. “The Intention Experiment: Using Your Thoughts to Change Your Life and the World.” Atria Books. 336 pp.

Rubik B. 1997. “The Unifying Concept of Information in Acupuncture and Other Energy Medicine Modalities.” J Altern Complement Med 3 (suppl. 1): S67.

This article is an excerpt from “Water Is…” (Pixl Press) by Nina Munteanu, due for worldwide release on May 10, 2016.

One thought on “The Memory of Water: the World in a Drop”