Coming Home to the Credit River 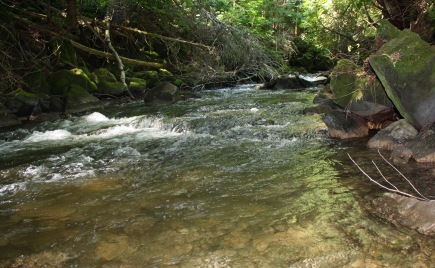 When John Stewart of the Mississauga News asked me why I’d featured the Credit River in my book “Water Is…” over the many rivers I’d encountered in my life’s work and travels around the world, I must have stammered some inadequate response. I can’t remember what I said.

Indeed, I’d crossed, walked along, and swam in so many rivers: the Seine in Paris, the Limmat in Zurich, the Danube and the Rhein in Germany; the Hudson in NYC, the Mississippi, Ohio and Columbia rivers in the USA—just to mention a few. I grew up near the Yamaska River in Quebec, where I went fishing with my brother, and raised my son near the Fraser River in British Columbia where we swam and boated. Each has offered me a unique and wonderful experience with water. And each has shared with me its unique story.

Path on the Credit at first snow

But the Credit offered me intimacy—And just at the right time in my life.

I suppose it is really a case of serendipitous synchronicity that allowed me to connect so intimately and meaningfully with the Credit River. I was about to begin my book on water and I’d just moved to Mississauga, initially to look after a wise old cat and later two incorrigible dachshunds. During our interview, John reminded me of the three things I look for when I first move into a place: a decent grocery store; a fine indie coffee shop to write in; and a park with accessible water—preferably a river. I had to smile: I had found my preferred grocery store (Whole Foods); I’d also found several coffee houses with exquisite coffee (Tavora and Coffee Culture) where I could write and research my book “Water Is…”; I was just missing my waterbody.

Then I discovered the Credit River. 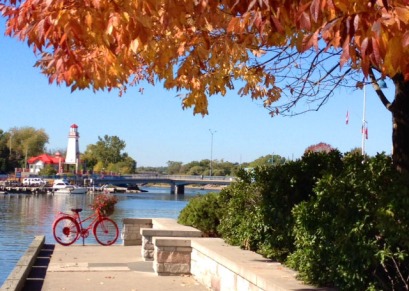 Credit River at Port Credit in the fall

Re-discovered, I should say. I’d already been introduced to the river where it empties into Lake Ontario at Port Credit some years before. When I was living in Toronto and starting my teaching career at UofT, I drove along the shores of Lake Ontario and usually stopped in Port Credit, where I walked along the pathways with a view of that Great Lake.

But it was after visiting Cheryl, my publisher friend in Streetsville, that I stumbled on an unassuming access point to the Credit River off Bristol Road.

The gate opened to a pleasant path along the Credit through enchanted forest. The path took me well out of road-sound earshot into a serene environment of trickling and gurgling water, underscored by the gentle rustling of trees and fluting of robins, chickadees and cardinals. Squirrels scurried across the path and snakes and amphibians slithered through the brush of mixed forest.

I often came to my magical garden; to sit and read or write in my notebook, to walk, to explore the shrubs and flowers, to listen to Nature’s wise and calming melodies, and meditate. My soul delighted in experiencing the changing faces of the Credit River’s riparian forest through the seasons: from cheerful summer and blustery autumn to snow-covered winter and vibrant spring.

Curious about the rest of the Credit River, which flows some 90 km, encompassing an 860 km2 watershed, I invited my naturalist friend Merridy on several fieldtrips to explore the river—from mouth to source. I was lucky in my choice of guide; Merridy—a native of the Toronto area—knew exactly where to go.

We made several trips over the space of a few weeks during a particularly warm and pleasant summer in 2015. The expedition started with Riverwood Park, where we walked along a pleasant network of pathways along the river. We stopped at a roaring cascade, where water churned over boulders the size of six-packs. I scrambled over them and plunged into the bracing water. It felt like a baptism. I dipped my hand in and sipped the water, beaming with unadulterated glee. I reached further down through surging waves and pulled up rocks teaming with life. Mayflies scattered, looking for cover; stone-building caddisflies clung to the rock.

The next day we travelled to the rural countryside of Caledon and explored the middle Credit River at the Forks of the Credit, about 40 kilometres upstream of our previous sampling location. Three forks of the river meet near the village of Belfountain, a destination for touring motorcyclists and sightseers looking for ice cream.

We investigated two forks nested deep in mixed forest. Merridy led me on a grueling hike, where we thrashed our way down several steep gulleys of thick forest and undergrowth to a wilder more fierce section of the river. Water cascaded and tumbled in great waves and vortices around me as I waded in. I felt the thrill of the strong current tugging my legs in chaotic pulses and had to fight to keep upright. Amid the open-throated roar of turbulent water, I found life flourishing on boulders and cobbles and in shallow shoals: stoneflies, dobsonflies, net-spinning caddisflies, shrimp-like amphipods and rock-clinging mayflies—all indicators of clean oxygenated flowing water.

marsh of the Upper Credit

The following day we went to the source of the Credit, a marshy collection of springs, now collected in a human-made reservoir for the community of Orangeville. The Upper Credit meandered through open cattail marsh and supported a rich periphyton (attached algae) and a benthic community of grazing mayflies and caddisflies that covered the cobble and gravel. The headwaters, located above the Niagara Escarpment, are home to native brook trout and brown trout populations.

The fieldtrips with Merridy fulfilled my urge as scientist to find out more about this beautiful river; but my connection to the Credit—as I waded through its length—cemented an intimate relationship with its water on a more visceral level.

Its water had become my water.

And I knew I’d come home.

6 thoughts on “Coming Home to the Credit River”