Why the Zebra Mussel is an Alga’s Best Friend 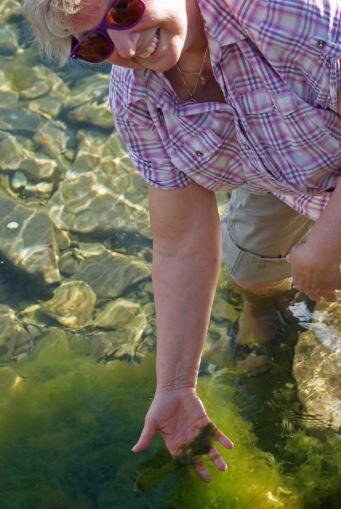 Nina Munteanu with cloud of Cladophora

The day after Canada Day, I went for walkabout with two friends to Gairloch Park in Oakville (Gairloch means “short lake” in Gaelic). The day was pleasantly warm and we enjoyed a leisurely walk through the 4.6 hectare grounds, graced with the once almost extinct Metasequoia trees, among other exotic shrubs, flowers and ponds. We eventually reached the shore of Lake Ontario. I trained my gaze out over vast cobalt blue to the horizon speckled with jade patches over sand; Lake Ontario sparkled like a majestic jewel.

I peered over the concrete parapet to water lapping onshore. The rocks and concrete wall slabs beneath crystal clear water were covered with a thick carpet of brilliant green algae. Resembling an underwater forest in a breeze, long skeins of filamentous algae swept languidly in and out with the waves.

I leapt into the bracing water and my friends laughed, startled. One had accompanied me along the Credit River last year and understood that I needed to feel as well as see.

I bent over and dipped my hand to touch the algae and pulled up a handful. Not Spirogyra, I thought. That filamentous alga with a spiral chloroplast was smooth like hair, almost slimy. What I held was a branching alga; it felt rough and wiry: the infamous Cladophora, I decided.

Infamous because Cladophora has been fouling the beaches of Lake Ontario for over 80 years. Its proliferation to nuisance levels was attributed to the high phosphorus (P) levels, which normally limit the growth of Cladophora. Algae, like plants generally, require light and nutrients such as phosphorus, nitrogen and carbon in a particular ratio to grow well. Whichever one is lower than its necessary ratio, will limit the alga’s growth.

Cladophora growth in Lake Ontario was considered “whole-lake forced” because phosophorus levels were high enough that Cladophora grew to the maximum depth of light penetration (another limiting factor), wherever it found solid substrate to attach. Cladophora glomerata is the most widely distributed macro-alga in the world’s freshwater ecosystems, and commonly bloomed in the North American Great Lakes, including Lake Ontario.

Striking reductions in Lake Ontario phosphorus levels, following the implementation of a multibillion-dollar phosphorus abatement program (Great Lakes Water Quality Agreement in 1972), have largely eradicated this macro-alga and today, phosphorus is sufficiently low to be limiting. However, Cladophora still thrives in near-shore areas—like at Gairloch Park—because of: 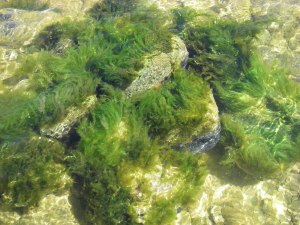 Native to the Black Sea region of Eurasia, the zebra and quagga mussels were likely introduced to the Great Lakes by ballast water from transoceanic ships. Acting as ecological engineers, the filter-feeding mussels enhance Cladophora growth in several ways: 1) providing attachment surfaces on the near-shore sandy bottoms for Cladophora to colonize; and 2) increasing water clarity and the depth sunlight penetrates for Cladophora attachment. The third way these bivalves benefit Cladophora is through what’s called the “near-shore phosphorus shunt”. The mussels ingest particulate P, a form of phosphorus not available to Cladophora, transform and excrete it as soluble reactive phosphorus (SRP), happily taken up by Cladophora. Cladophora now thrives in near-shore areas previously too murky for its growth and with a more available form of P.

During its spring growth period, Cladophora acts as a nutrient sink, consuming and storing great amounts of phosphorus, carbon and nitrogen. Higgins et al. (2008) reported that Cladophora beds along a 100 km stretch of shoreline in eastern Lake Erie removed some 15 tonnes of P over a 31-d period during May to June 2002. The Cladophora populations also removed 3,000 tonnes of C and 230 tonnes of N over the spring growth period. The reverse occured during the alga’s senescence (dying) phase, when it acted as a nutrient source to the water column. During the right conditions (anaerobic conditions) Cladophora tissues can release 80% of their phosphorus store over a 30-day period. 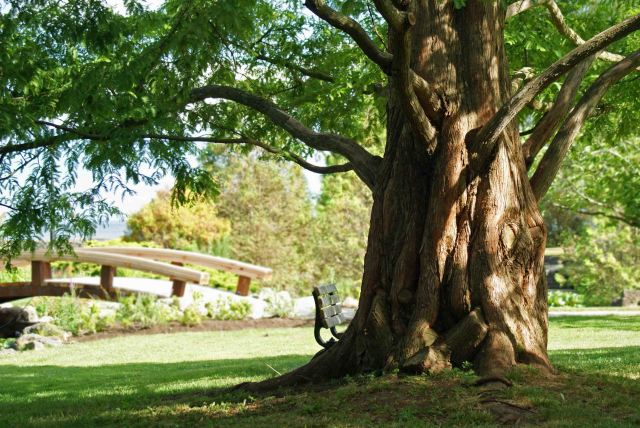 Cladophora mats accumulate a variety of other organisms and organic debris that support a community of microbes, flora and fauna within a rich micro-ecosystem. Organisms that use the Cladophora on rocks include: protozoans, epiphytes (mostly diatoms), and macroinvertebrates such as chironomids, oligochaetes and amphipods. This mat community may also harbor human pathogens: including Salmonella and E. coli).

Given the complex micro-community associated with near-shore Cladophora mats, this alga may serve a unique and important niche (ecological role) in the littoral zone for biogeochemical cycling and food webs (e.g., which fish communities thrive and which decline).