This year my book “Water Is…” was also at the festival! On the evening of the Ontario 150 Film Challenge Awards, the three award-winning films were shown and the filmmakers each received a copy of “Water Is…”

Nina and Antonio with “Water Is…” at Water Docs

In Season (2016; 9.5 min) chronicles surfers along Lake Ontario who face freezing temperatures during Toronto’s winters to pursue the sport with a passion that knows no seasons. This obscure and tightly knit community of surfers thrives on a nomadic lifestyle, chasing the perfect wave. I met Antonio Lennert, co-founder of Surf the Greats (@surfthegreats), who is called by Lake Ontario Waterkeepers “a water ambassador and community leader.” Surf the Greats organizes beach cleanups, yoga on the beach, educational sessions on the environment and water recreation. It is Antonio’s mission to reconnect Torontonians with Lake Ontario. 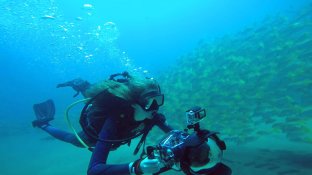 Sea of Life
(2016; 85 min) follows filmmaker Julia Barnes on an underwater adventure to discover the truth about the largest threats facing the ocean and the planet. Inspired by the late Rob Stewart’s film Revolution, Barnes finds goes on an epic journey around the world from Australia’s coral reefs to the Paris Climate Summit and everywhere in between. With the help of scientists, activists and explorers, Barnes examines the real dangers facing our oceans: a potential mass extinction through climate-mediated ocean acidification.

Here is more on Rob Stewart, award-winning biologist, photographer, conservationist and filmmaker of Revolution and Sharkwater.