Deep within the Himalayas—surrounded by a diverse forest of fir, spruce, bamboo, larch, Blue and Chir pine, oak, maple, hemlock, birch, rhododendron, and primula—lies the small nation of Bhutan and it’s schooling the world with its leadership in environmental stewardship.

Nestled between China and India—both behemoths in carbon emissions—Bhutan has become a carbon sink. This makes Bhutan the first country in the world to have negative carbon emissions. (Countries that have pledged carbon neutrality include: British Columbia [Canada]; Costa Rica; Iceland; New Zealand; Maldives; Norway; Tuvalu; and Sweden. Quebec [Canada] and California [USA] have reduced their carbon footprint to being close to if not already carbon neutral, with Ontario and Nova Scotia close behind).

Seventy-two percent of Bhutan is covered in forest and its constitution requires that not less than 60% of it remains forested. The Himalayan nation has even banned export logging. It is, of course, Bhutan’s forests that are responsible for the nation’s negative carbon emissions. They absorb more carbon dioxide each year than its industry, transportation, and energy sector emit.

Ecowatch reported that while “1.5 million tonnes of carbon [are emitted] annually, [Bhutan’s] forests absorb over 6 million tonnes.” But the government of Bhutan isn’t satisfied with that; they are planning for zero net greenhouse gas emissions and zero-waste by 2030. They also intend to grow 100 percent organic food by 2020. The country intends to increase its share of renewables, while decreasing its reliance on hydropower and electricity imports in the winter. This means exploring wind, biogas and solar power. The Bhutanese government recently formed a partnership with Nissan to provide hundreds of electric cars to the country. Prime Minister Tshering Tobgay wishes to eventually convert all of the country’s vehicles to electric power. 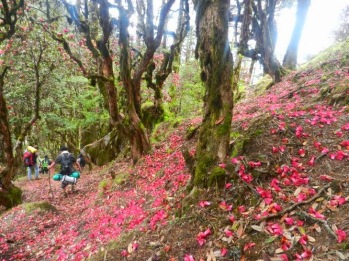 Trees hold special value in Buddhism. The Buddhist philosophy of respect for trees is expressed in the Petavatthu:

The Milindapañha says that the diligent disciple should emulate a tree: “As a tree makes no distinction in the shade it gives, like this, the meditator should make no distinction between any beings, but develop love equally to thieves, murderers, enemies and to himself.” 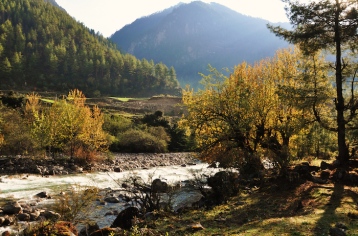 The Buddhacarita compares spiritual practice to a tree: “The fibers of which are patience, the flowers irtue, the boughs awareness and wisdom, which is rooted in resolution and which bears the fruit of Dhamma.”

“The meritorious person grows like a banyan tree, while the person of meagre merit becomes stunted like a tree planted in the roadway.”

In June of 2016, a hundred Bhutanese volunteers planted over 49,000 trees in just one hour. In early 2017, to celebrate the birth of the first child of King Khesar and Queen Jetson, all 82,000 households in Bhutan planted a tree; volunteers planted an additional 26,000 trees, completing a total of 108,000 trees. 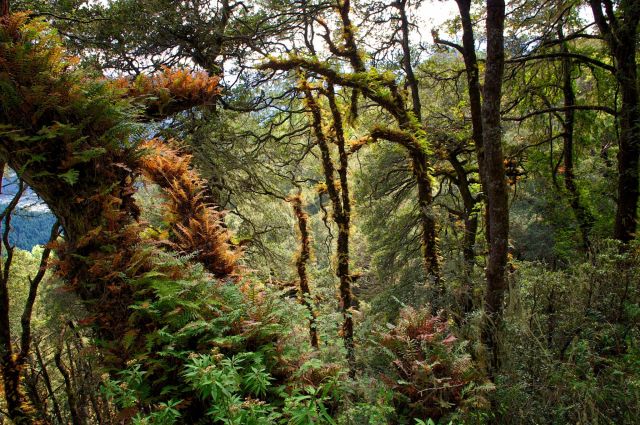 The success and commitment of this determined nation to a strong environmental stewardship ethic may be in large part due to its perspective on success. Instead of using its Gross Domestic Product (GDP), the nation measures its success by its Gross National Happiness index. The GNH measure focuses on prosperity, by giving equal importance to non-economic aspects of well-being. 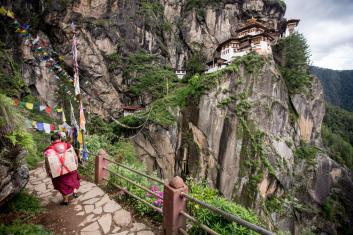 Hiking to the Tiger’s Nest monastery

The GNH was enshrined in Bhutan’s constitution in 2008. The GNH comprises nine domains, including: psychological well-being, health, time use, education, cultural diversity and resilience, good governance, community vitality, ecological diversity and resilience, and living standards. Canadians, Michael and Martha Pennock, developed an international version of the survey which has been used in their home region of Victoria BC as well as in Brazil.

Punakha Dzong, at the confluence of two rivers, was the venue of the Fifth King of Bhutans Royal Wedding.

Nina Munteanu
is an ecologist, limnologist and internationally published author of award-nominated speculative novels, short stories and non-fiction. She is co-editor of Europa SF and currently teaches writing courses at George Brown College and the University of Toronto. Visit www.ninamunteanu.ca for the latest on her books.