“The ice sheet below tells a tale of disintegration,” writes Eli Kintisch of Science as the helicopter of scientists hovers over Greenland’s interior. “Long, roughly parallel cracks score the surface, formed by water and pressure; impossibly blue lakes of meltwater fill depressions; and veiny networks of azure streams meander west, flowing to the edge of the ice sheet and eventually out to sea.”

Greenland’s ice sheet is the second largest ice mass in the world (after Antarctica). It covers about 10% of the Earths surface and holds three quarters of the world’s freshwater. The sheet contains enough water to raise sea levels by at least 20 feet. Glaciers flowing from the Greenland Ice Sheet have been retreating since the 1990s. Melt rate of the ice sheet is accelerating, losing 8,000 tons per second.

In 2016, ice melt started early and spread inland fast. By April, 12% of the ice sheet’s surface was melting. In an average year the melt doesn’t reach 10% until June, writes Kintisch about this growing “liquid fury.” Between 2011 and 2014, satellite data and modelling suggested that “70% of the annual 269 billion tons of snow and ice shed by Greenland was lost through surface melt, not calving [which itself had surged recently].” This added surface melt has doubled Greenland’s contribution to global sea level rise. “Things are happening a lot faster than we expected,” said geophysicist Isabella Velicogna of the University of California, Irvine.

Rivers of meltwater with cover of soot and algae darken the ice sheet, hastening the melt

What does this mean? “Greenland holds the equivalent of more than 7 metres of sea level rise in its thick mantle of ice,” writes Kintisch. You don’t need to do the math to understand the significance.

The Arctic is warming twice as fast as the rest of the world. But warmer moist air is not solely responsible for this accelerated melt. Microbes and algae are thriving on the wet surface, producing pigments that boost the ice’s absorption of solar energy. Soot and dust blowing in from lower latitudes darken the ice with the same effect. 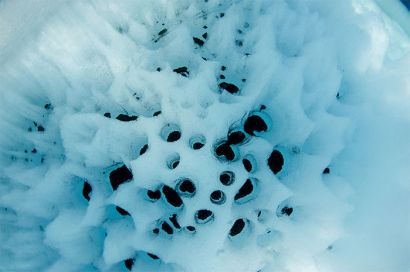 Kintisch writes of the scientists’ mission called “Black and Bloom” (referring to the soot and the algae, respectively) to study how these organisms are affecting the behaviour of the melting ice sheet. “We’re driven by curiosity,” says team leader Martyn Tranter, a biogeochemist at the University of Bristol, “but also the fear that all this new biology may accelerate global sea level rise.”

Scientists have found that dust and soot from European factories and Canadian wildfires have over the centuries been trapped and concentrated at the melting edge of the ice sheet. The scientists suspect that algae and bacteria play a sinister role in exacerbating the melt in places where the ice surface has become pocked with holes of crystal clear meltwater underlain by a spot of black sludge—known as cryoconite—at the bottom. Cryoconite is living bacteria that captures solar energy; it keeps the water from freezing. Brown-pigmented algal extremophiles that thrive in the freezethaw cycles also stain massive areas of ice. This growing meltwater ecosystem may drive an ever-accelerating melt.

As the Arctic warms, melt episodes are likely to “occur much more frequently in the future,” says Dirk van As of the Geological Survey of Denmark and Greenland in Copenhagen.

Climate scientist Marco Tedesco of Columbia University published a study that gave evidence for retreating Arctic sea ice disrupting the polar jet stream, causing weather systems to mender more slowly from west to east. What this means is unclear; but it confirms that extent and complexity of ecosystem changes on a global scale. Scientists also documented the exponential (nonlinear) character of the change. What this means is that change will compound itself as systems cascade.

Acknowledging the challenges of working in the growing meltwaters of a giant ice sheet, the Black and Bloom researchers also felt wonder at the transforming landscape. Jim McQuaid of the University of Leeds said, “Each evening we marveled as the sun went low, enjoying the fact that we were somewhere no one else had been, and would never be again, because of the melt.”

…What Will Greenland Do? What Will the World Do?… 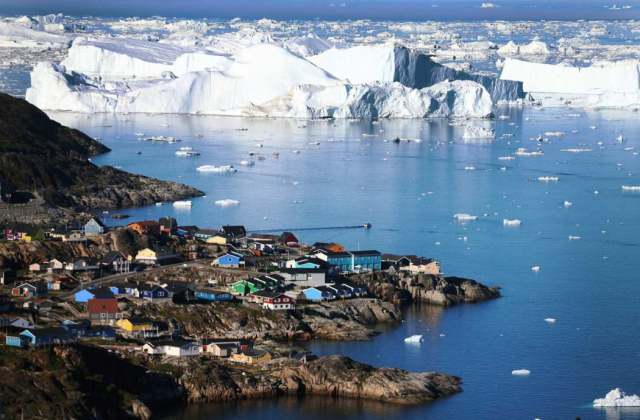 “Greenland naked threatens the entire world,” writes Joe Sherman of Occupy.com. “The self-governing island’s loss of ice will raise global seas around 23 feet.” He then adds, “Despite that consequence Greenland is presently swallowing the resource extraction industry’s relentlessly destructive, corrupt and carbon-increasing development model.” Sherman is referring to Austalian, Chinese and other interests in mining uranium and various minerals there.  “There are currently 56 active licenses to explore mining… what the world sees as creeping ruination, local politicians see as an opportunity. The melting ice sheet will make some minerals more accessible and reveal others that are so far

“Climate change has Greenland in its grip like no other nation,” writes Sherman. “And the relationship between the planet as a whole, and a single country, is unique in the annals of civilization’s history.