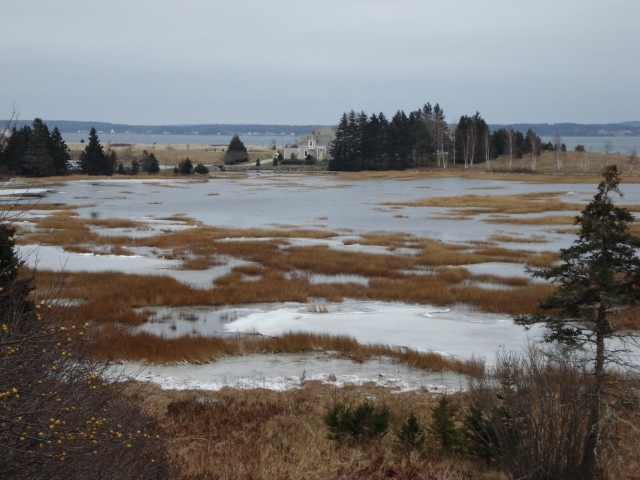 Coastal wetlands are some of the most productive ecosystems in the world; they provide a rich ecotone habitat for many aquatic and terrestrial wildlife and wetlands support the productivity of adjacent coastal waters by exporting nutrients. Coastal wetlands are particularly vulnerable to sea-level rise because of their location in low lying areas and the nature of their habitat. A number of studies have predicted the submergence of 20–78% of the world’s coastal wetlands by the end of the century.

In quantifying the impact of a 1-m sea-level rise on coastal wetlands in 86 developing countries and territories, Blankespoor, Dasgupta and Laplante (2014) found that about 68% of coastal wetlands in these countries are at risk. A large percentage of estimated coastal wetland loss will occur in Europe and Central Asia, East Asia, and the Pacific, as well as in the Middle East and North Africa. A small number of countries will be severely affected. China and Vietnam (in East Asia and the Pacific), Libya and Egypt (in the Middle East and North Africa), and Romania and Ukraine (in Europe and Central Asia) will bear the highest losses.

In North America coastal marshes have been disappearing at a rate of 20,000 acres per year (Pew Oceans Commision, 2003). Over the last century, Puget Sound in the Pacific Northwest lost 73% of its original salt marshes. Chesapeake Bay had already lost 90% of its submerged sea-grass meadows by 1990. Coastal wetlands currently make up about 40 percent of the wetlands in the lower 48 states of the United States, at about 40 million

acres. Since the 1700s, more than half of all the wetlands in the United States disappeared. California, a large coastal state, has lost more than 90 percent of its wetlands. Florida and Louisiana, two coastal states with the greatest wetland areas, lost close to half of their original wetlands. States along the Gulf of Mexico have the highest sustained wetland loss rate in the country. Three major reasons for wetland loss include: urban development, farming and grazing; and sea level rise. While dredging and filling for agriculture and urban development as well as impacts from their runoff continue to threaten coastal wetlands, sea level rise currently poses a significant threat to our remaining coastal wetlands.

While most climate specialists predict a 1 to 5 metre sea level rise by 2100, just a six-inch increase in sea level will turn many of our remaining shallow-water marshes into open water or sandy beaches, backed up against buildings, roads and parking lots. Shrimip, crabs, salmon, and hundreds of other species that rely on near-shore aquatic environments as a nursery and feeding ground, will simply disappear.

The future of coastal wetlands will depend on their capacity to adapt to the interacting effects of human impacts and sea-level rise. “Coastal wetland responses to sea-level rise are greatly influenced by biogeomorphic processes that affect wetland surface elevation,” write Osland et al. (2017) in PLOS. Small changes in elevation relative to sea level can lead to large changes in the stability of an ecosystem and how it behaves and looks. Coastal wetland vegetation responses to sea-level rise are being modelled to evaluate how a wetland will respond, adapt and survive sea-level rises under different inundation-rate scenarios. Rodriquez et al.  showed that wetland loss would be greater in wetlands with high density of flow restrictions (e.g. drainage modifications and restrictions such as levies, culverts and bridges) such as exist in heavily developed coastal areas of the world such as eastern Australia, eastern US, eastern China and Western Europe.

“Just how far inland any wetland can “migrate” depends on what surrounds it, whether they be natural features such as hills or plains or manmade features such as roads, settlements, croplands, or infrastructure,” says CIESEN (2013)

Coastal habitats provide ecosystem services essential the environment and to people; several of these services directly affect climate and adaptations to climate change. The EPA estimates that services provided by wetlands are valued at billions of dollars. In fact, it is quite ridiculous to put a price tag on these services, given that they are key to maintaining the planet and humanity along with it:

Landscape architects Kristina Hill and Jonathan Barnett write in the Harvard Design Magazine that there are three ways of dealing with the effect of rising seas on coastal development: 1) move development away from the shore, restoring the shoreline to a state that will accept the fluctuations of rising tides and storm surges (best alternative for individual homes in vulnerable locations, but a last resort for whole cities): 2) raise development above flood levels in their current place. Raising the elevation of a whole urban district can work, say the authors, although it is expensive and requires coordination of public and private investment; 3) protect coastal development with a combination of wetlands restoration, flood walls, and pumps. A version of this strategy (minus the significant wetland restoration) failed in New Orleans. While some engineers are thinking in terms of enormous barriers, some architects are thinking of altering buildings instead.

Regarding the third option, Hill and Barnett describe a horizontal rather than vertical plain (e.g., walls, mechanical barrier arms, levees, houses on stilts) to address sea-level rise and associated storm surges. They suggest a living coastal infrastructure that would support marine ecosystems and also absorb some wave energy and flood water and allow that new coastal infrastructure to migrate inland as sea levels rise. They cite the statistic that for every five miles of (functional) coastal wetland a foot of storm surge is absorbed and reduced. However, most of the heavily populated coastal areas don’t have the capacity to restore and construct such wetlands. Moreover, much needed light for marsh vegetation growth is usually blocked by turbid water from storm-water runoff and outfalls.

What Hill and Barnett propose is as brilliant as it is apparently wild: build artificial floating marshes and reefs. This brings to mind some of French architect Vincent Callebaut’s “outlandish” designs for the future. Hydrogenase is a floating algae farm with vehicles that recycle CO2 for biohydrogen. Lilipad is described as a “floating ecopolis for climate refugees.”