When the Seas Acidify…

In the last book of my space adventure The Splintered Universe Trilogy (Metaverse), galactic guardian Rhea Hawke must force-land her stolen air vehicle on an island in the Beleus Sea:

“The Beleus Sea shimmered in the sunlight with mercurial hues of lavender, deep purple, aqua green and blue. So different from the oily seas of Horus, the Beleus Ocean was extremely clear, reflecting the shifting light of the planet’s atmosphere in a glittering exotic paradise… The island was located on a shallow sand shelf that then dropped into the deep indigo-blue abyss of the Beleus Sea. It resembled a coral cay.”

Just as Rhea is about to wade into the water, her companion, a native of Beleus, warns her that she must avoid the water—it will burn her skin. Its very beauty also defines its dangerous attributes. It is a terrible beauty, the kind that masks death and destruction; a beauty like that of the deeply clear northern lakes impacted by acid rain which I studied years ago. They were devoid of all life. They were beautifully clear because they were lifeless.

Our oceans are acidifying.

Because the signs aren’t immediately apparent to us—not like the visible plastic islands now littering our seas—most of us aren’t paying attention. We just see the terrible beauty. Like an invisible scourge, carbon dioxide increases in our atmosphere. Like an intruder in the night, it dissolves in the ocean, lowering the pH of the sea and quietly threatening all marine life. 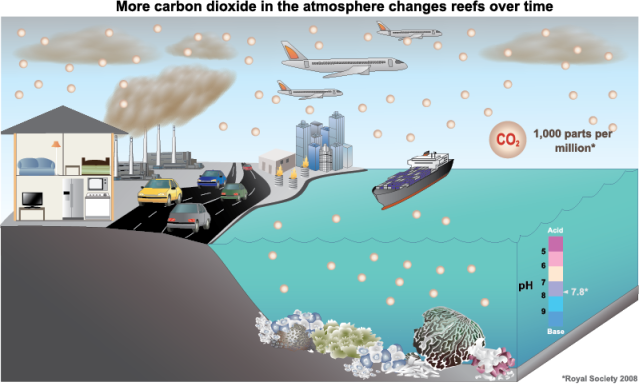 Already, ocean acidification has lowered the pH of the ocean by about 0.11 units (SCOR 2009) since the 1700s. Given that pH is measured on a logarithmic scale, moving the ocean’s pH from 8.179 to a current pH of 8.069, means the ocean is about 30% more acidic now than it was in 1751 (SCOR 2009). With ocean acidification, corals cannot absorb the calcium carbonate they need to maintain their skeletons and the stony skeletons that support corals and reefs will dissolve. If we continue to produce carbon dioxide at the current rate, future atmospheric carbon dioxide will be high enough to lower ocean surface pH to 7.8 by the year 2100 (Royal Society 2008). Scientists have done laboratory studies that suggest a pH about At this pH, scientists suggest that coral skeletons will dissolve and reefs will fall apart (Fine and Tchernov 2006). If coral reefs are lost, vital habitat will be lost. The very nature of our life-giving ocean will be in peril.

Effects of ocean acidification can be predicted from studying hydrothermal vents (naturally occurring fissures in the ocean floor that eject volcanically-heated liquid carbon dioxide and dissolved minerals into the surrounding water; where CO2 seeps out at concentrations equivalent to projections for the end of the century). Aside from the obvious devastation of species diversity, one interesting effect is overprotective parenting.

A recent study compared populations of polychaete worms that live directly at hydrothermal vent openings with those living in less acidic waters. Polychaete worms are marine segmented worms covered with bristled, feet-like appendages. While the worms living in cooler, more basic waters release numerous young into the water column to fend for themselves—a typical reproductive strategy for these types of invertebrates — the ones living in the hot, acidic water near the vent exhibit completely different parenting behavior.

Further genetic analysis revealed that this second population recently diverged into a different species from the first population, as it adapted to the more extreme environment. Instead of surrendering their eggs to the whims of fate, this new species lays much larger and fewer eggs in a tubular brooding pouch. In an act of self-sacrifice, the female invests all her energy into producing these eggs and their protective pouch, but dies soon afterward. The father, in a rare display of paternal care, sticks around to ventilate and protect the embryos as they develop.

Tse adds that while some species may adapt to increasingly acidic oceans through parenting strategies, it is unclear whether this can happen fast enough and what ecological side-effects it will promote.

What can we expect to see in a more acidic sea? Certainly a reduced biodiversity. If the hydrothermal vent environments are any indication, we can expect to see rich kelp forests and myriads of fish reduced to barren areas of short turf algae with no colour.

Tse ends her article with this grim suggestion:

“…It looks like the rich ocean life we’ve gotten used to admiring in nature documentaries is not long for this world. If you’ve always wanted to see the Great Barrier Reef in person, you’d better book that trip as soon as possible.”