Spring on the Little Rouge River

I step out of the car in the Rouge River Park parking lot and walk to where the river passes beneath a bridge on Steeles Avenue. At this point it’s still a country road, though likely not for long. The Behemoth of encroaching development calls loudly with resounding notes of suburban sprawl. We need more space, they call with the cacophony of back hoes, moving cranes and pounding pneumatic hammers. To get to this park, I had to pass through a miasma of giant homes arranged in tight rows along sterile roadways devoid of any green except the kind we roll out from trucks.

But here, on the Little Rouge, Nature sighs with a wild wind—for now.

Even river parks are not sacred when “progress” flexes its imperative muscles. One need only look to the Don River and the travesty enacted there by ordinary people doing what they normally do in a place they do not respect or think they have no use for, or need to answer to: litter the ground with cigarette butts and Tim Hortons disposable cups; tear down and pave over forest; fill in wetlands to put in neat lawns and straight avenues.

Canada was once known for its preservation of parks and waterways. But just recently Environment Minister Catherine McKenna told the Vancouver Sun that she wishes “to hit ‘reset button’ on Parks Canada and shift focus to conservation.” My question is, “From what?” 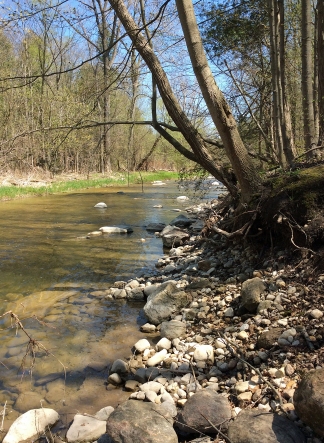 Conservation and preservation are often used interchangeably by politicians and the public in general; however, while they overlap greatly in terms of acknowledging a need to protect the environment, they differ significantly in perspective. Quite simply, conservation comes from a human-centred utilitarian perspective; preservation, on the other hand, is an eco-centred approach to preserve in-tact an ecosystem in its natural state. While conservation involves managing for humanity’s immediate needs; preservation involves a hands-off approach to help maintain the planet’s integrity (and ours by association). Preservation is what Canada was and should be doing with its National Parks. But this is not so. And apparently hasn’t been for some time. Else, why would the environment minister be calling for conservation in a national park? Else, why would she be including development in the same breath as mentioning a national park?

“Maintaining and restoring ecological integrity requires limits on development in national parks, particularly those where development can impact ecosystem health,” McKenna said with an independent working group to be struck to examine Parks Canada’s practices and approval policies for development (my italics). This is a far cry from preservation of Canada’s wilderness. A wilderness that is critical in promoting climate stability and maintaining planetary integrity (and our own lives in the process).

Root tangle in a cedar-pine grove (photo by Nina Munteanu)

I peer over the high bank of the river and spot dozens—perhaps fifty or more—small fish. Probably trout. I’m told that Rainbow trout, brown trout, coho and chinook salmon, as well as suckers, bullhead and carp, flourish in the river. They find deep hollows cut by the river’s thalweg, undercuts that serve as cool refuge for these foragers. 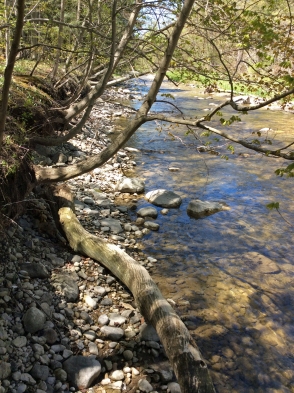 When I enter the cool forest of cedar, pine, maple and beech, chipmunks scatter and scold me for interrupting their calm. I chuckle and think that I’ve seen more within the space of one minute here than I have in a year in the suburb I currently live in.

The Rouge River central woodland I’m walking through lies in the Carolinian forest. The Carolinian forest is a diverse mix of willow-Manitoba maple- cedar bottomland, with red oak-hemlock-white cedar slopes and hemlock-white pine-sugar maple-beech-black cherry-red oak tableland. The path leads me through snaking roots beneath the pungent smell of pine and cedar. I make my way toward the banks where beech and maple bow over the water. I spot the occasional ironwood, balsam poplar, oak, white ash and basswood, contributing their voices to the forest community.

The complex smell of the forest and the sight of its floor awakening with spring flowers tugs me back to childhood. Every summer, I used to follow my older brother and sister to our nearby forest and local stream in the Eastern Townships of Quebec. We stirred soil, flower petals, moss and other interesting things with water to fuel “magic potions.” I spent a lot of my childhood days in the forest, close to the ground. Observing, poking, catching, prodding, destroying and creating.

Beneath the cool overstory of beech-maple-oak and hemlock a colourful understory is thrusting up through the litter and loam. Trillium. Blood root. Solomon’s seal. Trout Lily and Ostrich fern. All friends from childhood. Within weeks they will form a thick living carpet of mottled green, brown, yellow and white.

As I peer at the living mosaic, I spot a familiar friend I’ve not seen in a while: Jack-in-the-Pulpit. They are all over the forest floor, pushing up in profusion, their large hooded and striped flowers appearing in shades of green, greenish-white and purple. The flower features a pouch-shaped spathe (“pulpit”) and fingerlike central spadix (“jack”), which give the plant its common name. This rather bizarre looking plant is even more bizarre in behaviour.

I meet a nature photographer on the path and we get to talking about the spring flowers. He tells me a wonderful story about this strange plant: the young Jack-in-the-Pulpit plant first emerges as a male plant from a vegetative cormlet, putting out male flowers, which produce pollen. As it grows, the plant switches sex and the larger spadix puts out female flowers, which can then produce seeds and a cluster of berries. A more nutrient rich soil or brighter area accelerates the growth and shortens the transition from male to female. But, if conditions grow difficult from lack of nutrients or stress from drought, the female plant reverts back to being a male plant. This cycle—called sequential hermaphroditism—ensures that the plant is strong enough to reproduce and produce healthy seeds. Jack is patient and wise. And a shapeshifter. 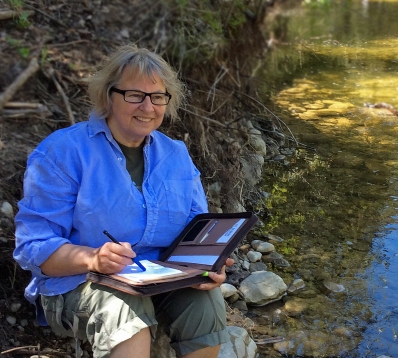 The Little Rouge River calls me to sit and listen to its flowing song—a joyful playful symphony of breaths, chortles, cackles and open-throated froth. I scramble down the overhang to the cobbles and rocks. I sit. And still my breath. I find my whole body relax from the tension of the suburban drive. I am home, sighing with the rhythm I’d forgotten. Realigning. Chick. Chick. Chick. Bones with rock. Rock with twig. Twig with root.

The animals no longer scold me. They have resumed their natural rhythm, as I merge into scenery. I notice the huge maple tree above me on the bank overhang. The bank is a tangle of roots; I’d used some of them as steps to get down. They wind a braided network, thick snakes that hold the bank in place. A mysterious never-ending Ouroborous.

Science tells me that all the trees of a forest are really one organism, connected by roots and the microorganisms inhabiting them, communicating through the micorrhyzae in the ground and the hundreds of aerosols the trees exhale every second of every day.

If you sit long enough in the forest you will start to feel this too. You will breathe it in. And in doing so, you will realize that we are all connected and we are all one.

I meet another local on my way back. He tells me about the history of the Rouge. Rouge River Park is one of a few wilderness areas left in South-Central Ontario.

A site on the Internet claims that the park has been untouched by development since the arrival of Europeans; however, I have seen evidence of logging and development throughout and the local I meet in the park confirms this. Along with the housing development encroaching its southeast boundaries, the park is currently surrounded by agricultural land—some of it continuing inside the park. Little Rouge Park remains a gem of ecosystem health despite the history of human interference. I learn that, unlike other rivers in the Toronto area, the Rouge is allowed to fill its entire flood plain on a regular basis rather than being forced through an artificial channel. The result is, of course, an ecosystem that can behave like it is meant to behave, providing a home to a diversity of life.

The Rouge River watershed is home to 1,700 species of animals and plants; more than 20 are classified as species at risk.

5 thoughts on “Spring on the Little Rouge River”