Do Plants Communicate? Why Is This Important For Us?

Walking the Pacific Spirit Forest, BC (photo by Nina Munteanu)

A few weeks ago I went with Margaret on a nature walk led by UBC Professor and botanist Terry McIntosh in the Pacific Spirit Forest Park at UBC. McIntosh led us through a previously logged forest of Douglas fir, cedar, red alder, vine maple and hemlock. His guided walk was informative, enlightening and entertaining with copious stories that generated laughter and discussion.

Among many interesting discoveries, McIntosh pointed out the paint-like splotches of lichen on the red alder trees, assuring one hiker that these symbiotic

communities of fungus, blue-green algae and in some cases yeast were not a harmful disease of the tree, but a commensal partner. The presence of lichens, in fact, just shows that sufficient light is there for them to photosynthesize and grow. Lichens are also a sign of clean, healthy air—given that they do not tolerate pollution in the air.

A moss expert, McIntosh pointed out the mosses on the ground, growing on soil, concrete and trees. After debunking the myth that mosses only grow on the north side of trees in the northern hemisphere—they mostly do, but not always—he mentioned that they were in their dormant stage in the dry summer; the fruiting bodies sprout when the haploid-dominant moss comes to life during the moist winter season to produce diploid spores. 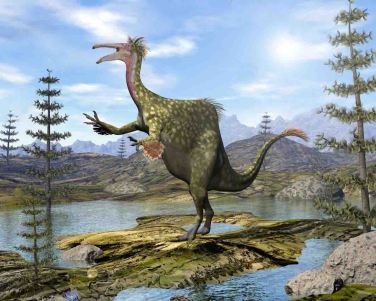 When we reached a partial clearing, McIntosh pointed out 6-foot high horsetails (Equisetum sp.) flourishing amid Spirea and other native plants. Horsetails are really “living fossils”, being the only living genus in a family of vascular plants that reproduce by spores rather than seeds.

For over one hundred million years the class Equisetopsida was much more diverse and dominated the understory of late Paleozoic forests. Some grew 30 meters high. One of them, the genus Calamites, was abundant in coal deposits from the Carboniferous period and is featured in my upcoming novel “A Diary in the Age of Water.”

McIntosh also mentioned that the maple twig depicted on the Canadian one cent coin is botanically incorrect. The phyllotaxis of the twig on the coin is clearly alternate while maples all have opposite leaves.

Citing a bogus yet popular information source on the Internet, McIntosh pointed out the danger of using the Internet for taxonomic and ecological answers. He stressed the importance of doing accurate research by verifying the source and mentioned some reliable scholarly ones. I totally concur with him on this. While the Internet is rich with information, it can also be misleading and wrong. Users need to be discerning and verify information through cross-checking to ensure a reliable source. See my post on research. 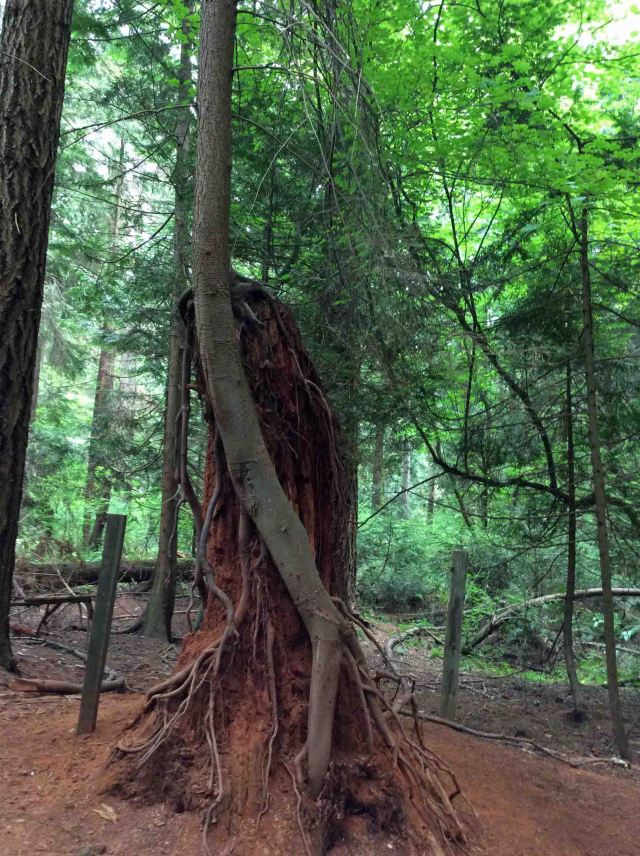 However, I had to disagree on one point he made in the first five minutes of the walk. McIntosh began by describing how much of what goes on in a forest ecosystem is underground, involving bacteria and fungal mycelium that spread and colonize roots of plants. After supposedly blurting out the word “communicate” he berated himself and quickly ‘corrected’ by assuring us that “plants don’t communicate; they aren’t human.” But he allowed that they share nutrients and minerals.

This is still communication.

Humans don’t have the monopoly on communicating; communication occurs in many forms and ways—including vocalization, smell, frequency, gravity, and intention. Cells communicate. Atoms communicate. Everything communicates by acting and reacting, by sharing and receiving. All these interactions are a form of communication.

To return to the subject of plants and trees particularly, UBC’s own forest ecologist Suzanne Simard has proven through hundreds of experiments over 30 years that trees share information via an underground cooperative communications network. “They [converse] not only in the language of carbon,” says Simard in a TED Talk, “but also nitrogen and phosphorus and water and defence signals and allele chemicals and hormones—information.” According to Simard, scientists had already speculated that this belowground mutualistic symbiosis—called a mycorrhiza—was involved.

Mycorrhiza literally means “fungus root.” Fungal cells interact with the root cells and trade carbon for nutrients. The fungus gets those nutrients by growing through the soil and coating every soil particle. The mycelium connects different individuals in the forest—like birch with fir and works like the Internet with nodes and links. Simard and others demonstrated that hub or mother trees act as nodes to nurture hundreds of their young saplings and send their excess carbon through the mycorrhizal network to the understory seedlings.

“Forests aren’t simply collections of trees” says Simard. “They are complex systems with hubs and networks that overlap and connect trees to allow them to communicate, and provide avenues for feedback and adaptation. This makes the forest resilient through many hub trees and overlapping networks.”

But the forest is also vulnerable.

In her TED talk, Simard shows an aerial view of a region dominated by clearcuts, just on the border of Banff National Park—where several wildfires are currently burning.

Simard shares that, “in 2014, the World Resources Institute reported that Canada in the past decade has had the highest forest disturbance rate of any country worldwide.” Not Brazil! “It’s 3.6 percent per year—four times the rate that is sustainable,” says Simard.

She warns that massive disturbance at this scale can affect hydrological cycles, degrade wildlife habitat, and emit greenhouse gases into the atmosphere—creating more disturbance and more tree diebacks. She adds that the planting of one or two commercial species at the expense of the aspens and birches decreases needed complexity in the forest; it makes them vulnerable to infections and bugs. And wildfires. As climate changes, “this is creating a perfect storm,” says Simard, citing the massive mountain pine beetle outbreak that swept across North America and the wildfires currently devastating Alberta and British Columbia as good examples of the consequence of human disturbance. 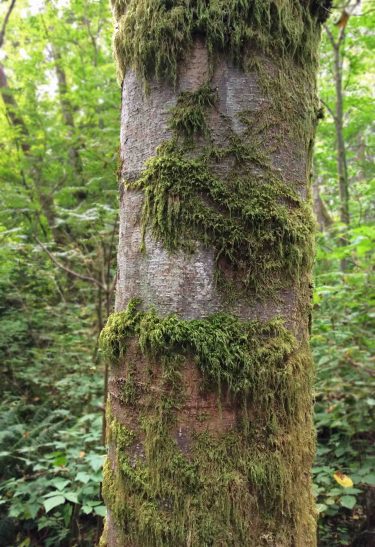 The key to increasing the resilience to climate-induced wildfires, drought, disease and insect infestations is in recognizing that trees and other plants do and need to communicate in a diverse network of information exchange. Our forests have been weakened through poor forest management based on commercial clearcutting, removal of hub trees, and creation of mono-cultured forests. Complexity enhances an ecosystem’s ability to self-heal. Retention of hub trees and patch cutting (as opposed to clearcutting and monoculture) will help to regenerate a diverse ecosystem, less susceptible to disease, insect infestations, drought and wildfires (as opposed to regular fires, which can be beneficial by opening seeds and creating clearings for more light).

Wildfires that burn hot (over 900°C) destroy most of the organic material of the soil, and with it the helpful fungus and bacteria that connects the trees. Wildfires may also impact how water circulates in a watershed; the burned organic matter affects the natural layering of the soils, making it water repellent. This increases runoff and erosion.

Citing a BC government report into the fires and floods of 2017, Tracy Sherlock of The National Observer writes: “Last summer could be a “new normal our province and planet now face due to the unpredictable and increasingly volatile impacts of climate change.” From 1900 to 2013, B.C.’s average temperature has increased faster than the global average, their report says. “Scientists predict that the province will face increases in extreme weather, rising sea levels, increasing risk of wildfire and flooding, as well as a change in the location of ecosystems and species that live there.” No one is sure whether climate change means more lightning strikes. Some research suggest more frequent strikes; other research suggests lightning will be less frequent.

Anatomy of a Wildfire

“Extreme heat lofts smoke, ash, and fire into the atmosphere, forging a 45,000-foot-tall convective column that generates two counterrotating vortexes—like a giant egg beater,” writes Kyle Dickman in Popular Science of the 2011 New Mexico wildfire. “It went from normal to nuclear, kicking up a 45,000-foot column of tornadic winds and burning debris.” Here’s how Dickman describes it:

Burning vegetation releases moisture, which the fire’s heat drives up the plume. It condenses into a pyrocumulus cloud, which in turn can create extreme downdrafting winds that can further stoke the ground fire. As vegetation combusts, it releases fuel-rich hydrocarbons. Driven by updrafts, they rise and can ignite into towers of swirling flame. The massive vertical winds inside the column can rip a pine cone off a branch, set it on fire, shoot it a few hundred feet into the air, then spit it as far as 2 miles away, where it can start a new fire. At night, cool dense air pools in the Valles Grande caldera like water filling a 13-mile bathtub. When it sloshes over, it creates 26-foot-per-second winds that fly down-canyon and strike the wildfire’s southern flank. As they squeeze through the canyons radiating from the caldera, the winds gain speed, then rise above the ground and come crashing back like churning ocean waves. As the wind ignites the blaze, it drives the fire forward in 35-foot flames that look like rolling barrels of fire. 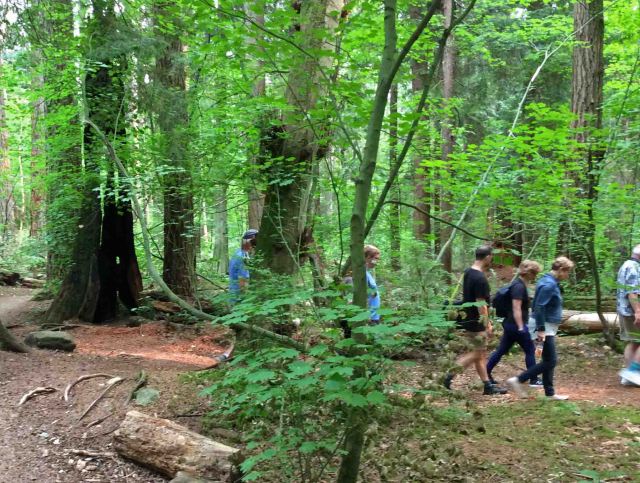 Walking the UBC forest, BC (photo by Nina Munteanu)

One thought on “Do Plants Communicate? Why Is This Important For Us?”