In his book, How to Read Water, Tristan Gooley describes a phenomenon called clapotis gaufre. Also known as “waffled clapotis”, the term comes from the French word (clapotis) for “lapping” and describes a standing wave phenomenon created by the troughs and crests of waves as they hit and reflect back from a barrier. The incoming and reflected outgoing waves, in passing each other, form a waffle-pattern that bobs up and down but otherwise appears stationary.

In fact, it is far from stationary.

But we like “stationary.” So much so that, despite the magnitude of planetary-scale change, everything appears stationary to us. People go on with their daily lives as they have for generations: driving cars; living profligately; wastefully consuming energy, disposables and water; bickering about fuel taxes and job security. But this is an illusion, a very dangerous one. Surface inertia hides a depth of motion. In a river, where high-velocity water roars over a steep river-bottom depression, a frothy stationary breaker forms; it is the most dangerous part of the river. What we can’t see, we think won’t hurt us. But what if we could see the ominous dark cloud of carbon dioxide and methane blotting more and more of our sky? What if we could see the fumes billowing out of our cars and the heat radiating from our homes? Or smell the toxins spilling into our rivers and lakes?

What if we could see the fractal signs of change? 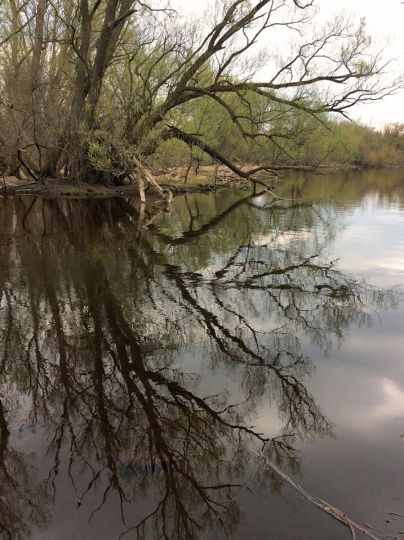 Nothing in nature stays the same. Or if it does, that’s because change has brought it back to what it once was. Trees move. They grow wider and taller; they just do it at a pace beyond our impatient lifestyle. Because their motion is invisible, they are invisible. We think of trees as stationary objects, not living beings. Like a standing wave of frozen time. The gases and water in the air are in constant motion, flowing along invisible currents and leaving invisible wakes behind them. We simply don’t see the change that streams right before us.

We observe through the hurried lens of human impatience and self-preoccupation. A quick glance takes in a scene. We forget that we can “see” with other senses. Smell. Touch. Taste. Hearing. As hyposmia and disinterest dulls our senses, we grow less able to recognize the verisimilitudes of Nature’s trompe l’oeils. Trapped by our preordained notions, we no longer see the changes we’re not prepared to see. And that’s the change that kills us. 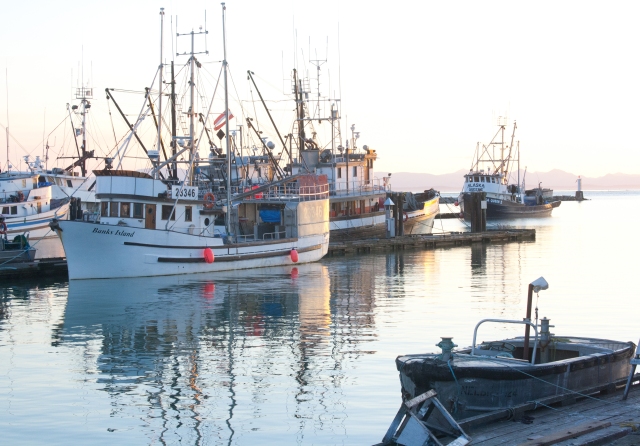 Fishing boats in Steveston Harbour, BC (photo by Nina Munteanu)

In witnessing the collapse of fish populations on the west coast in the ‘90s, UBC fisheries biologist Daniel Pauly noticed that people just went on fishing ever smaller fish. The collapse occurred through what he called “creeping disappearance.” Pauly named this impaired vision “shifting baseline syndrome,” a willing ignorance of consequence based on short-term gain.

Peter Kahn, professor of psychology at the University of Washington, argues that each generation can only recognize and appreciate the ecological changes they experience in their lifetimes. He calls it “environmental generational amnesia”, which is really no more than an attempt to normalize their current situation. The term ‘normal’ suggests a static and relatively constant situation, one that can be measured and predicted based on a known pattern. One of the reasons some people dismiss the reality of climate change is its very unpredictability (if we can’t measure it, it isn’t real).

Stability brings complexity and diversity into an ecosystem; organisms that flourish in stability will invest in their environment so long as it remains stable. In contrast, disturbance and highly variable environments favour rare species: organisms that are uniquely equipped for change. These are the explorers, misfits and revolutionaries, who do their work to usher in a new paradigm. They carry change inside them, through phenotypic plasticity, physiological stress response mechanisms, or life history adaptations.

Examples include diapause in brachionus rotifers who undergo cyclical parthenogenesis. Or akinete formation in blue-green algae. Or anhydrobiosis for tardigrades and bdelloid rotifers. In tune with the vacillations of Nature, the bdelloid rotifers—which adapt epigenetically to rapid and catastrophic change such as climate change—survived for millennia and will continue for many more. They adapt by counting on change.

One could argue that the inability to feel and connect beyond our immediate line of sight can be a good thing—a kind of selective memory that allows us to adapt to each “new normal.” Mothers of several children can testify to the benefits of “forgetting” their hours of labour to give birth. Hence the ability and willingness to repeat this very painful experience. Is this part of successful biological adaptation in all of us? The ability to reset? For the environment and our relationship with it, however, it never is a reset. It is more like quiet acquiescence as we whittle our environment—and ourselves along with it—one unobtrusive forest at a time. I’m reminded of the lobster in the pot of water slowly coming to a boil. It doesn’t realize it’s dying until it does. And on some level, it doesn’t care—it is not sufficiently aware of its changing environment to appreciate what the incremental change means to its own survival. When does dis-ease turn to alarm? Who is to say that if that lobster wasn’t confined in a pot it would not have slowly edged away from the source of heat—like some of us deciding not to buy property in a 100-year floodplain?

The dominant form of a stable environment is not the best candidate to survive catastrophic change; the rare, often side-lined organisms—familiar with being on the edge—will inherit the new paradigm. The same comet that took down the dinosaurs provided the stage for the development of mammals. Just as oxygen-breathing organisms inherited a new world after the Great Oxygen Event took down the dominant anaerobic organisms of Precambrian Earth.  We’re the dominant form in this world. We’ve become comfortable in the quiescent backwaters.

The phenomenon described by Kahn’s environmental generational amnesia is not so much about not understanding or caring about the past, but of not being sufficiently connected to and caring about the present. The history of our existence has long been veiled through a patriarchal androcentric filter that has limited our ability to value and celebrate the diversity of animate and inanimate things on this planet, from water, rocks, bacteria and insects to the magnificent trees. To view our environment as participants—not to dominate and destroy but with which to co-exist and cooperate—is too humbling for too many of us; it offends the “capitalist” spirit that feeds on growth, monopoly, debt and flow of capital. How is it useful to me? is the question posed. What’s in it for me? If we respectfully participate with environment, then we can’t really use it the way we do now, can we?

To return to my example of the mother gladly giving birth again and again—it is not that she has forgotten the pain; it is rather that she chooses to relegate her memory of it behind something far more beautiful and wondrous to remember: the miraculous birth of her child—her investment in the future. Environmental generational amnesia is part of a larger amnesia, one that encompasses many generations; a selective memory driven by short-sightedness that comes in part from lack of connection. Expanding on what Marq De Villiers wrote in Water, limnologist Lynna in A Diary in the Age of Water writes:

“The slow violence of free-market capitalism isn’t so much the deliberate and focused actions of a few evil men, as the accumulated negligence of an undiscriminating collective of unimaginative humans—doing what they’ve always done for years on end.”

Greed—like most cheats—is enacted through a short-term lens founded on an ill-perceived notion of stability. According to ecologist C.S. Holling, Nature learns through instability (and disturbance) and accommodates with time through change. It is through the experience of instability that the structure and patterns of its ecosystems succeed.

Holling’s four phases of change and succession begin with exploitation, in which new opportunities are realized through rapid colonization and competition. Natural forces of conservation (e.g., nurturing, consolidating) lead to a system that grows into a vulnerable and “decadent” system (e.g., an old growth forest or humanity where we are now). As stabilizing forces lose strength and the ecosystem evolves from having few interrelationships to having many, this often results in an abrupt change that both destroys the system and creates opportunity (creative-destruction) through fire, storms, pests, and disease. Mobilization of stored “capital” (e.g., carbon, nutrients and energy) through physical, chemical and biological processes (e.g., decomposition and mineralization) completes the dynamic cycle of a functional ecosystem. This, in turn, starts the exploitation phase all over again. While these phases with increasing diversity reflect “instability,” overall they also reflect resilience and elasticity in a stable chaos that relies on change.

Modern humanity has only been here for some two hundred thousand years, expanding during the fairly stable climate of the Holocene Epoch. The Earth—whose existence is best measured in millennia—has experienced at least five major extinctions through global ‘resets’ over its 4.5 billion history. Clues to this planet’s turbulent pre-history surround us “from the scratches of the receding glaciers’ claws to giant boulders lazing in fields, made of rock from distant lands, dragged and dropped there by rivers of ice. Ancient sediments perch on mountaintops, uplifted by our restless earth, packed with the fossils from the bottom of the sea,” writes journalist Lynda Mapes in Witness Tree.

Previous global ‘resets’ have occurred over millions of years. Scientists now warn that our Anthropocene global warming is occurring at least twenty times faster. “Even at the end of the Permian Age, when huge injections of CO2 from volcanoes burning through coal deposits culminated in ‘The Great Dying,’ the CO2 content of the atmosphere grew at perhaps a tenth of the current pace,” wrote Bill McKibben in The New Yorker.

True happiness comes with fulfillment, not short term material wealth and comfort. When we focus from ourselves to embrace the world, we discover a well-spring of altruistic happiness. When we embrace, we transcend. When we transcend, we become fluid with change. That is when we succeed.

If only we could see the fractal signs of change.

“Fractals are recursive,” writes Lynna in her diary. “an obscure pattern of frequency, wave and oscillation. Like the branches of a tree. But also like the recursive nature of seasons, the ebb and flow of ocean tides and the motion of the clouds. A single moment can ripple out and change everything. The smallest ripple can evoke the greatest tide, like Lorenz’s flapping butterfly” in Brazil, setting off a tornado in Texas. We’ve been “flapping” for a while. Time to open our eyes and prepare for the tornado.

Gooley, Tristan. 2016. “How to Read Water: Clues and Patterns from Puddles to the Sea. The Experiment. 400pp.

quote by Goethe: “We must always change, renew, rejuvenate ourselves; otherwise we harden.”

One thought on “Embracing (Climate) Change”