We are finally starting to see that environmental stewardship is indeed possible on all fronts—so long as there is will. We are smart. We just need to want to. 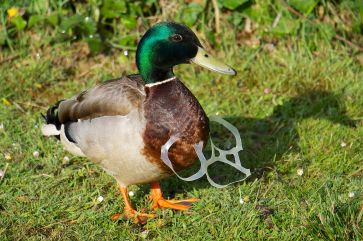 An example of this is in the food and drink industry and particularly the use of six-pack rings. We’ve all seen the photos or even experienced in real life the consequences of these nasty plastic things tangling the wings of sea birds, choking seals and ducks, and warping the shells of growing sea turtles. I remember in the old days when I bought drinks held by six pack plastic rings that I would cut them into pieces to save wildlife from tangling with them; but I still discarded them and the plastic still found its way into our rivers, lakes and oceans.

A few years ago, a Florida brewery found a solution.

Saltwater Brewery, a craft microbrewery in Delray Beach started by surfers, fishermen and people who love the sea, introduced six-pack rings that can either biodegrade or serve as a snack for wildlife. The rings are made of wheat and barley and are now popping up in south Florida stores. The brewery developed the rings with a startup called E6PR. Troubleshooting and manufacturing the rings was expensive but the companies were motivated by a need to help the environment. E6PR hopes other breweries, both small and large, will buy into the new rings and help bring costs down.

Since then, craft brewers in Australia, South Africa, Poland, Scotland, Connecticut, Michigan, Pennsylvania and Washington State have started using the rings. Now Corona has become the first major beer company to use the product.

Plastic pollution is an issue in our oceans. Every minute of every day a garbage truck’s worth of plastic enters the ocean. Plastic water bottles and caps, food wrappers, cigarette butts, plastic bags, plastic straws of all kinds contribute to the 8-11 million tons of plastic pollution that enter our ocean annually.

Plastic pollution is a particularly problem in large inland seas like the Gulf of Mexico. According to recent research by Louisiana State University, the Gulf has one of the world’s highest concentrations of marine plastic. Each net or bottle dipped into the Gulf by LSU researchers came up laden with plastic. In 2018, a volunteer beach cleanup on three miles of Elmer’s Island gathered more than 170 plastic six-pack rings, along with 4,000 pounds of other trash. According to Craftbeer.com, E6PR is testing the rings with “a select group of craft breweries.”  Hopefully other breweries and other drink makers incorporate the rings.

Consumers can make a difference by asking for them and refusing to buy product without safe environmental packaging.