Looking for Water on Bennu Asteroid 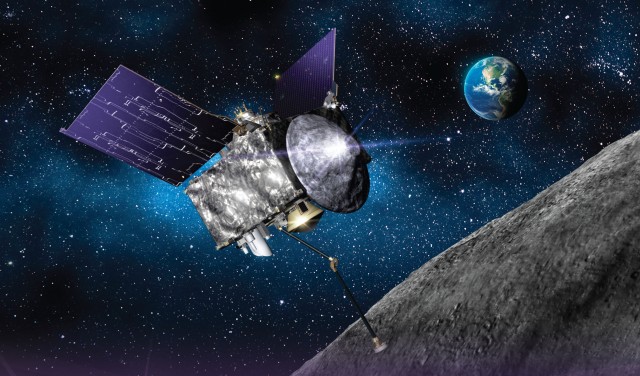 A year ago, the NASA-led OSIRIS-Rex spacecraft reached the asteroid Bennu after a 26-month journey and started a detailed survey of the stadium-size asteroid. In its first major scientific find, NASA’s OSIRIS-REx spacecraft found water on asteroid Bennu.  The discovery was made via observations during OSIRIS-REx’s approach to the Near Earth Asteroid between mid-August and early-December 2018 and confirmed previous thoughts that Bennu might be a place harboring water in the inner solar system. Two of OSIRIS-REx’s spectrometers, the OSIRIS-REx Visible and Infrared Spectrometer (OVIRS) and the OSIRIS-REx Thermal Emission Spectrometer (OTES), revealed the presence of molecules containing bonded oxygen and hydrogen atoms, known as hydroxyls – revealing a global distribution of water-bearing clay minerals on Bennu.

While Bennu might be water-rich, that doesn’t mean it has liquid water on its surface now. The discovery of water is not a discovery of liquid water pooling on Bennu’s surface, it is a discovery of water-containing clay minerals. Slightly over 1,600 feet in diameter, Bennu is currently so small that its surface is unable to support liquid water. Researchers hypothesize that between 800 million and a billion years ago, the boulder-strewn heap of rubble we know as Bennu was probably part of a larger asteroid, more than 62 miles in diameter, which would have been big enough to support water. Planetary scientists think that the larger body was shattered in a huge collision, leaving smaller pieces like Bennu floating through space in accumulations that resemble massive piles of rubble.

“The presence of hydrated minerals across the asteroid confirms that Bennu, a remnant from early in the formation of the solar system, is an excellent specimen for the OSIRIS-REx mission to study the composition of primitive volatiles and organics,” said Amy Simon, OVIRS deputy instrument scientist at NASA’s Goddard Space Flight Center.

Close up of Bennu Asteroid

A key objective of the mission is to bring back asteroid material rich in water-bearing minerals and organic molecules—ancient ingredients that have been sitting undisturbed since the birth of the solar system and that could shed light on the raw materials that allowed Earth to become a habitable world. The return of such water-bearing material could help solidify or distance scientists from a theory that asteroids seeded Earth billions of years ago with the water that now dominates our planet’s surface.

OSIRIS-Rex (the name is an Egyptian-themed acronym that stands for Origins, Spectral Interpretation, Resource Identification Security, Regolith Explorer) is a multipurpose asteroid mission that aims to understand the composition and history of the solar system’s oldest building blocks.

The Canadian instrument—a laser altimeter—has made some three billion measurements, building up a topographic map of the asteroid’s boulder-strewn terrain. Because of Canada’s role in the mission, we get a share of whatever the probe manages to capture of the asteroid.

Water is considered valuable for future space missions because it is a potential source of fuel. Being able to mine asteroids for water would mean that future missions wouldn’t have to rely on Earth for fuel, and could potentially explore further into the Solar System.