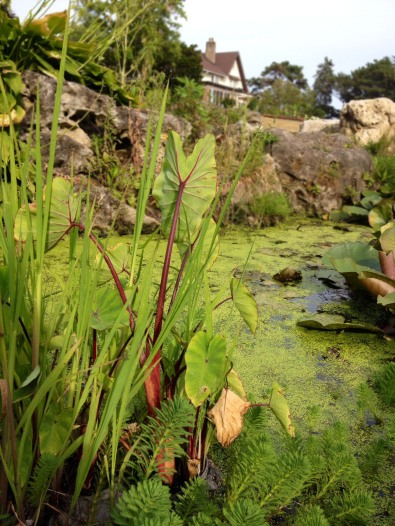 Groomed lawn and garden by pond, Gairloch Gardens, ON (photo by Nina Munteanu)

“Lawns are an American obsession,” says Matthew Ponsford of CNN in his article entitled “Designing an end to a toxic American obsession: The Lawn.” Ponsford calls them pristine carpets of green turf meticulously maintained by suburbanites according to bylaws and homeowners associations.

Lawn history is rooted in wealth and status, writes the David Suzuki Foundations’s Queen of Green in an article entitled, “How to get your yard off grass.”

According to Taylor Logan in an article on CBC, the concept of a lawn originated in medieval times, on the land outside European castles. The short grass enabled watchmen to see friends of foes approaching from afar. Lawns soon evolved into status symbols among the wealthy. In 17th century England, only rich landowners had lawns (a monoculture of short, manicured grass). Work once done by sheep increasingly shifted to human labour, especially closer to the house. Before lawnmowers, only a few could afford to hire people to scythe and weed their grass.” 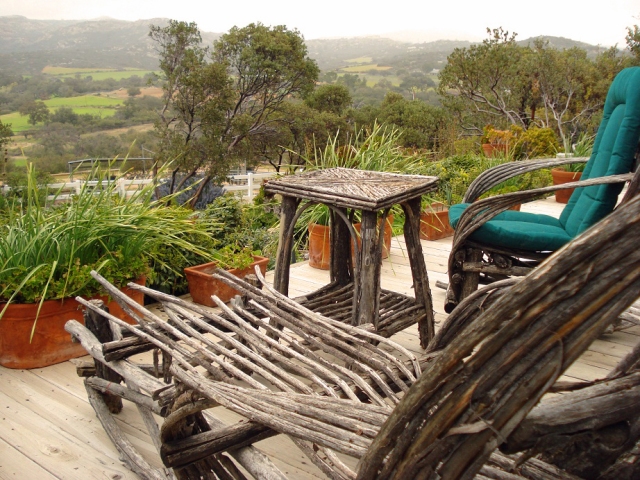 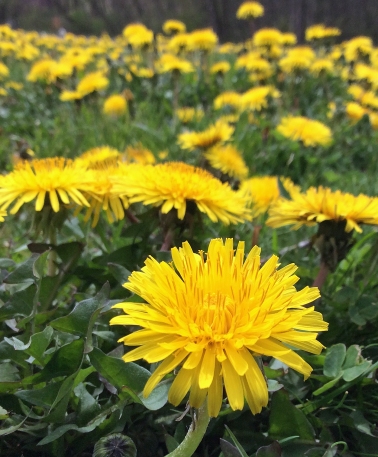 Lawn with dandelions in spring, ON (photo by Nina Munteanu)

Maintaining a perfectly manicured lawn produces more greenhouse gases than a lawn absorbs. These monocultures are biodiversity deserts that have lost important soil microbes and insect populations. Lawns are often maintained through pesticides and herbicides, which negatively impact birds, squirrels, and other wildlife that rely on them for food. These chemicals that some of us so liberally spread on our lawns also contribute to endocrine disruption, infertility and even cancer. Roundup, typically used on many monocrops, is a glyphosate and proven to cause cancer in humans.

This wasn’t always the case. In the past, writes the Nature Conservancy of Canada, sedges, clovers and other plants were accepted—even encouraged—as part of the diverse flora that made up a healthy, happy lawn. “Then came along the idea that anything other than lush, green grass made yards impure and ultimately undesirable.” Alternative vegetation was, at one point, promoted in lawn care—and for good reason! 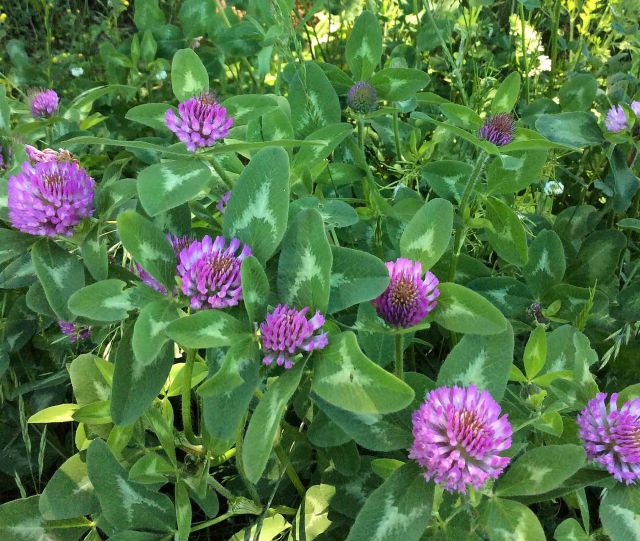 Dandelions gone to seed in a lawn, ON (photo by Nina Munteanu)

Drew Dostaler at the Nature Conservancy of Canada reminds us that clovers are nitrogen-fixators: “they take nitrogen out of the air and mix it into the soil to fertilize themselves, staying lush and green all summer long.” On the other hand, several species of sedges are drought resistant, saving on water use. Many small flowers that grow on lawns, such as dandelions, also attract pollinators and support local butterfly populations.

Ponsford reported NASA satellite findings that American residential lawns occupied some 130,000 square km—nearly the size of the country of Greece. Ponsford wrote that these lawns  require more irrigation than any agricultural crop grown in the USA. In California, more than half of household water is used outside the house.

Researchers at the University of Montana estimate that lawns in the United States cover about 128,000 square kilometres, making them the single largest irrigated crop in the country. Hundreds of litres of water are needed to keep these yards green and once you factor in the additional environmental costs—including fertilizer, pesticides, weed killers, and the fuel needed for mowing—lawns don’t seem, well, quite that green.

According to the David Suzuki Foundation, “there are about 6.2 million lawns in Canada. Converting just one-quarter of each lawn would equal around 14,400 hectares of habitat for pollinators.” Monoculture grass is the most dominant land cover in the Capital Regional District on Vancouver Island and contributes to the most water wastage in the Victoria area.

“Replacing lawns with native habitats is the best option, but other practices also can reduce impacts,” said Amanda Rodewald, a professor and senior director of conservation science at Cornell University. The best way to create a native habitat, said Rodewald to CBC, is by creating an alternative lawn. Substitutes include xeriscaping and permaculture, and are known to be better for the environment. If you can’t change your lawn to be the perfect habitat, Rodewald suggests reducing the size of your lawn by incorporating native flowers, shrubs and trees that are attractive and support biodiversity. Beyond that, she advises taking a more laissez-faire attitude, says Logan.

“If your lawn is necessary, eliminating the use of chemicals, mowing less frequently and letting grass be taller can reduce energy consumption, water needs and attract a greater diversity of pollinators.”—Rodewald

In Western states such as California, Colorado and Arizona, droughts have led to restrictions on water usage, forcing many to reconsider their thirsty lawns. Some inventive families and landscape architects have adopted a “rewilding” concept and create more edible landscapes by transforming yards, producing oases of life for hummingbirds, bees and butterflies, and by employing scientific insight, design and imagination. “According to environmental scientists, transforming lawns into miniature modular bio-reserves could not only boost biodiversity, but could cut water and petrol consumption and reduce the use of dangerous lawn chemicals,” writes Ponsford. According to Jodie Cook, a landscape designer in San Clemente, California, “west coast homeowners are growing increasingly aware of how innovative models for lawns can benefit natural ecosystems, while providing a new dimension to the family home.” 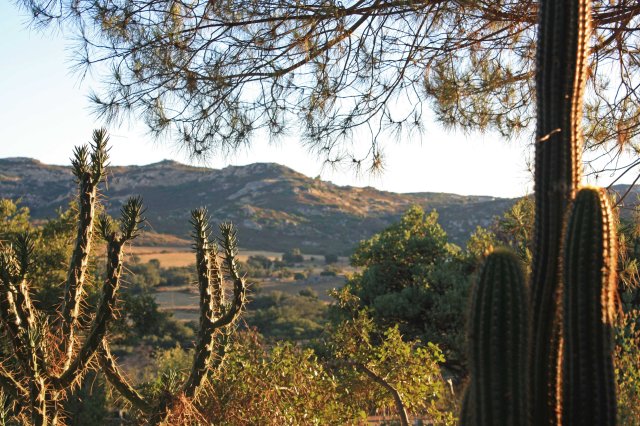 Cook has redesigned home lawns across Orange County, with an emphasis on “ecosystem-centric” design. According to Cook, this new garden model is giving people permission to play. Ripping up a generic lawn can reveal a canvas for personal creativity—to plant with food, flowering plants and herbs, or to shape into wildlife habitats that invite in local fauna. “It seems to me that they are yearning for an authentic experience of nature close to home,” said Cook. There is increasing evidence that close contact with natural environments can reduce stress and anxiety, and even help maintain memory as we age, writes Ponsford.

What Cook sees in California reflects an emerging trend across the country, writes Ponsford. “In Minnesota, homeowners have been offered rebates to replace lawns with flowering plants beloved by bees. Cities and municipalities, such as Montgomery County in Maryland, have also offered to pay families and homeowner associations to design gardens that collect storm water in water features and underground rain barrels.”

“Such policies can lead to big changes. Images of intensely irrigated lawns in Phoenix, ringed by the red sand of the Arizona Desert, were once a disturbing case study of America’s lawn addiction. But in recent decades, the state has taken action, charging more for water in the summer and banning lawns on new developments. At the turn of the millennium, 80% of Phoenix had green lawns, now only 14% does.”

Landscape architects are seeing families change their preferences, according to a recent poll by the National Wildlife Federation’s (NWF) Garden for Wildlife initiative. The NWF encourages Americans to design gardens with food, water and shelter for wild animals. 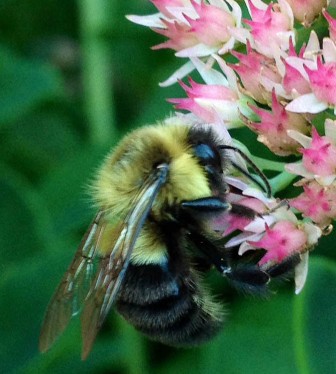 Mary Phillips, senior director of the NWF, urges people to consider nature. She refers to recent research that shows wildlife gardens can support bee biodiversity comparable to natural parklands and, as a result, a greater number and diversity of birds, especially songbirds. “The stuff that people are usually trying to get out of their lawn, we’re saying ‘No, that’s good to have in your lawn!'” said Phillips. “So reintroduce native violets — and even dandelions—certain clovers, low-growing thyme and things that flower, which provide pollinator benefits and are better for the soil.”  These types of plants have root systems that better manage storm water runoff, in addition to absorbing more carbon, she explained.

Backyard of La Toscana di Carlotta B&B, Niagara on the Lake, ON (photo by Nina Munteanu) 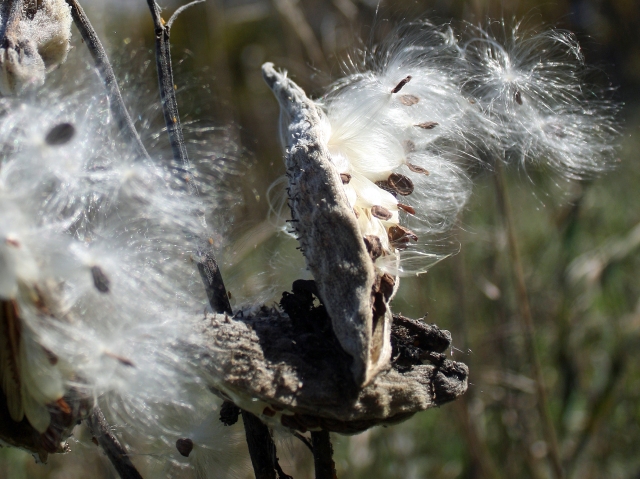 Nina Munteanu is a Canadian ecologist / limnologist and novelist. She is co-editor of Europa SF and currently teaches writing courses at George Brown College and the University of Toronto. Visit www.ninamunteanu.ca for the latest on her books. Nina’s bilingual “La natura dell’acqua / The Way of Water” was published by Mincione Edizioni in Rome. Her non-fiction book “Water Is…” by Pixl Press(Vancouver) was selected by Margaret Atwood in the New York Times‘Year in Reading’ and was chosen as the 2017 Summer Read by Water Canada. Her novel “A Diary in the Age of Water” was released by Inanna Publications (Toronto) in June 2020.

One thought on “Moving to Sustainable Yards—For Biodiversity and Health”