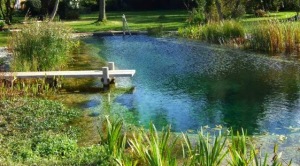 It’s a beautiful summer day in 2030. You step out of your Point Grey house and stroll down to the Hydrogenase Hub at Kits Beach in Vancouver. You’re heading out to visit your ecologist friend Michael, who has been renovating his property on Galiano Island. You helped him design his place, which included an outdoor natural swimming pool (NSP). The work is finished and Michael’s invited you over to see what they’ve accomplished.

You reach the floating station, which serves as an algal farm to capture biological fuel. At the gate, you give your personal landing coordinates and then board a Hydrogenase airship–essentially a tall seed-shaped “algal balloon”. You settle in one of the viewing rooms with a Chai latte. Because the Hydrogenase can effortlessly land and take off in the roughest terrains, their service includes “on demand” to “your doorstep”. This is a good thing, you ponder, given that many people live in more remote locations–like Michael. The sleek vessel glides over Georgia Strait toward the Gulf Islands and you watch the view, reflecting on the history of NSPs in North America. 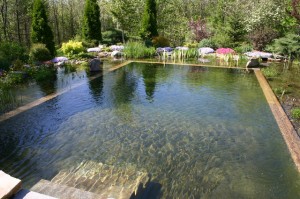 The first Natural Swimming Pools were developed in Austria ten years before you were born. Known as schwimmteiche the first one was built in the early 1980s by DI Werner Gamerith in his private garden. NSPs spread throughout Europe in the 1990s, where thousands were built by companies like the Austrian firm Biotop Landschaftsgestaltung and the German firm BioNova. But it took almost two decades for the NSP concept to catch on in North America. The first public NSP in North America was built in 2014 by BioNova in Webber Park, Minneapolis. The NSP featured a shallow end with a beach and a deep end, a waterfall, lap lanes, a water slide, and a natural stone jumping cliff. The pool is used in the winter for skating. 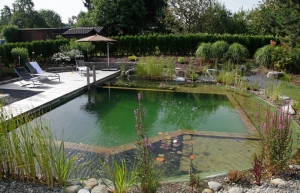 That same year, your mother (Nina Munteanu) wrote a book about water. Published in 2016 and entitled Water Is… the book explored water from a range of perspectives. Spanning points of view from limnology to human health, spirituality and metaphysics, her book touched upon the importance of good, clean “living” water for ecosystems generally and for human health specifically.

You consider that your mom would be delighted at the present statistics. In 2014, only one commercial NSP existed in North America. Today, just two decades later, it’s hard to find one chlorinated pool amid the thousands of private and commercial NSPs in North America. And why not? Old fashioned pools relied on chlorine and other harsh chemicals to maintain sterile, algae-free water. They lacked character or aesthetics. Research showed that chlorine-treated swimming pools caused asthma and other breathing problems in swimmers. Chlorine was also hard on the skin and hair. Swimming in a chlorinated pool often left you with itchy red eyes, dry skin or wanting a shower. NSPs provide excellent water quality through chemical-free water treatment; they create habitat for wildlife and flora and the maintenance costs are far less than the old conventional pools. 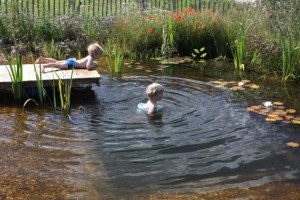 The Hydrogenase descends to a clearing past the end of Bodega Beach Road on Galiano Island. You spot Michael waiting in the clearing. The Hydrogenase briefly touches down to let you off and Michael greets you with a rakish smile. He’s happy to see you and show off his new creation. Michael leads you along a forested path to his summer property near the northern cliffs of the island, overlooking Porlier Pass and Georgia Strait. 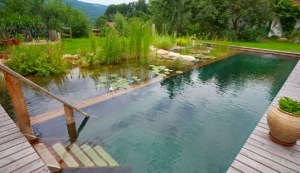 As you turn a corner and the forest opens to the cliffs on which the house is perched, you see the pool and glance at Michael with a sideways grin. Surrounded by a constructed shoreline of large and small rocks and wetland plants, the pool forms a kind of figure-eight in front of the house you designed for Michael. A gazebo made from local wood sits cozy by the natural shoreline. An inviting diving board overlooks the sparkling water. It’s all so beautiful. And serene.

You both wander to the pool and you bend down on your knees to look into the deepness of the sparkling clear water.

Natural swimming pools are balanced living aquatic ecosystems, you reflect. They are designed to look and function like a natural pond. Plants, microorganisms and nutrients together create what’s called “living water”. Michael points to a water strider, dancing over the water surface—a sign that the water is clean and “alive”.

You glance over to the wetland portion of the pool. Although you don’t see them all, you know the components: a set of bio-filters, UV filters, and mechanical aeration in combination with lush aquatic plant filters that form a regeneration zone—the signature feature of an efficient NSP. 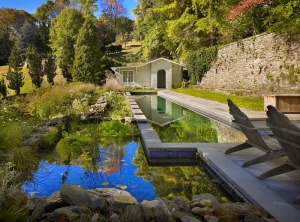 It’s Nature’s elegance at its best, you think; and, according to architect Thomas Woltz, embracing the complexity of modern life while seeking meaning and narrative in both natural and man-made environments. 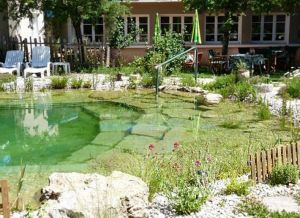 The regeneration zone relies on the surface area of the plants’ roots and the gravel substrate to create a home for beneficial bacteria that filter the water. You recognize floating, emergent and submerged plants: water lilies, sedges, rushes and grasses. And below the surface, you see the fluorescent green whorls of Ceratophyllum, a rooted submerged plant that helps oxygenate the water. 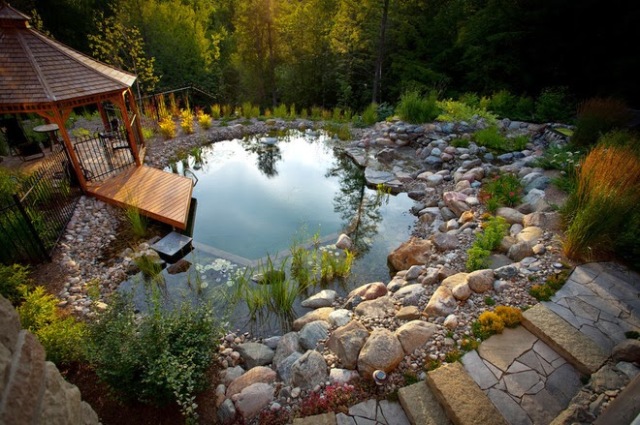 You stand up and scan the whole set up. At the edge of the regeneration zone, the natural look continues with a wetland gradient of native plants that thrive in the periodically inundated soil. They provide a rich habitat for birds, dragonflies, frogs, turtles, newts, and a host of other fauna, some of which share the swimming pool with fellow swimmers. 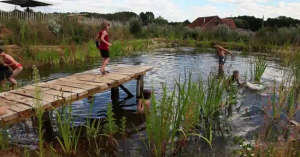 Michael, who is an avid birder, points to the cattails, where some blackbirds have already made nests. He tells you that he spied a wood duck checking out the pond yesterday.

You ask him if he is pleased and know what he will answer from his zealous grin.

You glimpse a dragonfly and follow its irregular path into the cattails. Twenty years ago, 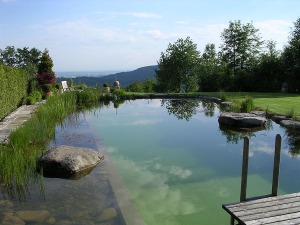 when NSPs first gained popularity in North America, you recall the concern over mosquitoes and other nasty insects. But the moving water and the natural predators of mosquito larvae that live in the chlorine-free water make natural swimming pools practically mosquito free. In fact, researchers found that NSPs actually help reduce the population of stinging insects by attracting dragonflies and other natural predators of fully developed mosquitoes. 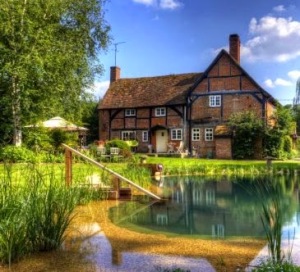 You remember your mom lamenting twenty years ago about people’s lack of ecological knowledge and connection to the environment. A lot has happened in twenty years, you consider. Today, no one would think to use nasty chemicals in the water to kill everything; people somehow have learned to cherish life more. All life. Including the frogs and that little water strider for their role in providing a healthy ecosystem. 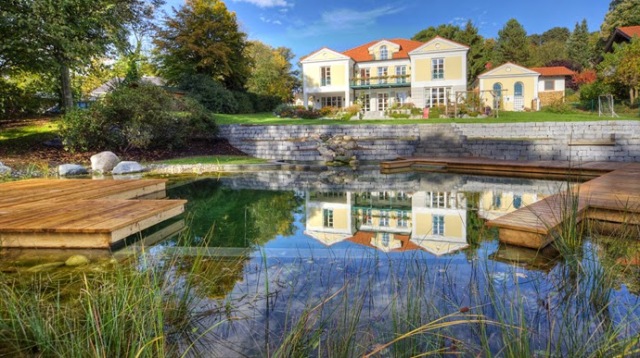 Michael grins with sudden inspiration. “Kevin, let’s go for a swim!” he says. You nod. Why not? Can’t leave it to the frogs. 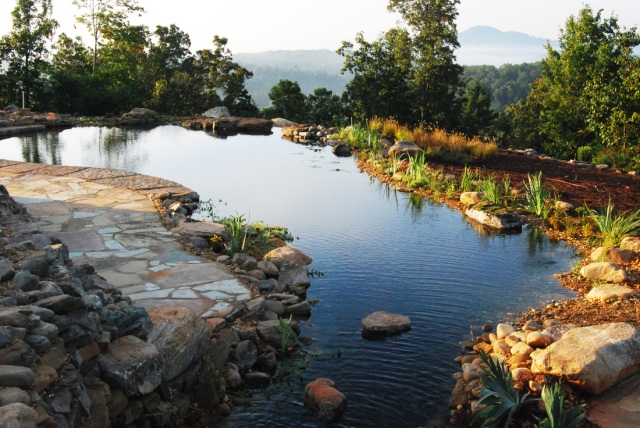 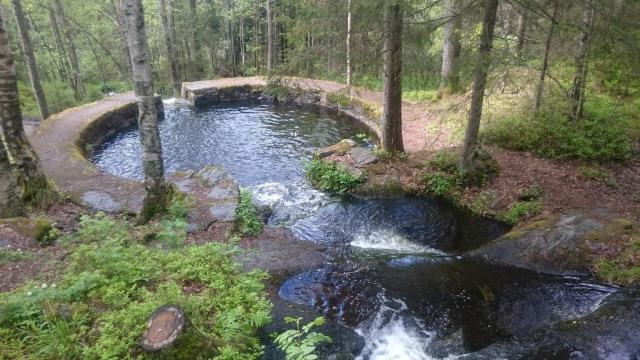