“No snowflake ever falls in the wrong place.” —Zen Proverb 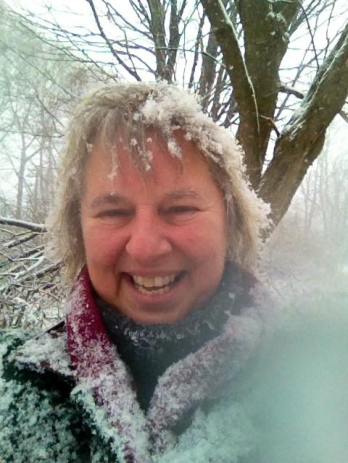 Nina in a snow blizzard

Snow wraps everything in a blanket of soft acceptance. It creates a dazzling face on a dark Earth. It refuses to distinguish between artificial and natural. It covers everything—decorated house, shabby old car, willowy trees, manicured lawn—beneath its white mantle. It quiets the Earth.

Snow is a shape shifter, charging down in a fierce blizzard and as hoarfrost that forms as water vapour migrates up through the snow base on cold, clear nights. Snow is a gypsy, conspiring with the clever wind to form mini-tornadoes and swirling on the cold pavement like misbehaving fairies. It drifts like a vagabond and piles up, cresting over the most impressive structure, creating phantoms out of icons. Some people, fearful of the chaos and confusion that snow brings, hide indoors out of the cold. Others embrace its many forms, punching holes through the snow crust to find the treasure of powder beneath or ploughing through its softness, leaving behind an ivory trail of adventure.

Barn in field, BC (photo by Nina Munteanu)

Snow is magic. It reveals as it cloaks. Animals leave their telltale tracks behind their silent sleuthing. No two snowflakes are alike. Yet every non-aggregated snowflake forms a six-fold radial symmetry, based on the hexagonal alignment of water molecules when they form ice. Tiny perfectly shaped ice-flowers drift down like world peace and settle in a gentle carpet of white. Oddly, a snowflake is really clear and colourless. It only looks white because the whole spectrum of light bounces off the crystal facets in diffuse reflection (i.e., at many angles). My son, who skies, extols “champagne powder”—very smooth and dry snow ideal for gliding on. On powder days, after a fresh snowfall, mountain trees form glabrous Henry Moore-like sculptures. Skiers wind their way between the “snow ghosts,” leaving meandering double-helix tracks behind them.

Snow is playful. It beckons you to stick out your tongue and taste the clouds. Snow is like an unruly child. Snow is the trickster. It stirs things up. Makes a mess. It is the herald of change, invigorating, fresh and wondrous. Cars skid in it and squeal with objection. Grumpy drivers honk their horns, impatient to get home; while others sigh in their angry wake. Brown slush flies in a chaotic fit behind a bus and splatters your new coat. Boys and girls (of all ages) venture outside, mischief glinting in their eyes, and throw snowballs. Great battles are fought in backyards where children build awesome forts and defend them with fierce determination.

The Snowflake & Its Morphology

Snowflakes are crystals of pure ice. They grow from frozen water droplets (in the form of water vapour as opposed to much larger raindrops). Water vapour in the air condenses and freezes to add more ice to the newly born snowflake. About a hundred thousand cloud droplets make a single snowflake heavy enough to fall to Earth, says Caltech physicist Kenneth Libbrecht, author of The Secret Life of a Snowflake.

Snowflakes have six sides because a water molecule lines up that way, based on its tetrahedral arrangement. While snowflakes are completely symmetrical with themselves, they don’t match any other snowflake. A single snow crystal consists of millions of molecules of water and the number of ways that these molecules can arrange themselves into six-sided crystals is huge. Each snowflake is unique—just as each person is unique—because it encounters unique atmospheric conditions during its descent. Each one of a snowflake’s six arms undergoes the same micro-condition; but no two snowflakes experience that same condition. 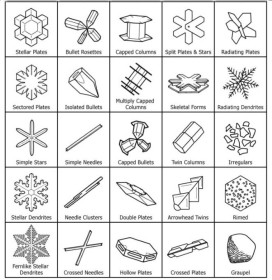 While no two snowflakes look alike, you can still recognize types of shapes. Just as aggregated snow varies according to temperature and humidity, so do individual snowflakes. Those who study snowflakes classify them into four main groups: dendrites; columns; needles; and rimed snow.

The dendrite or ice fern is the classic snowflake and the shape most of us imagine for a snowflake. It’s a “plate” snowflake that looks like a star or flower, with small side branches crystallizing from each of the six main branches. Some dendrites display a more intricate fractal arrangement, resembling a fern. Dendrites form in a wide temperature range, depending on saturation of the cloud, from just below freezing (low saturation) to minus 20°C (high saturation). 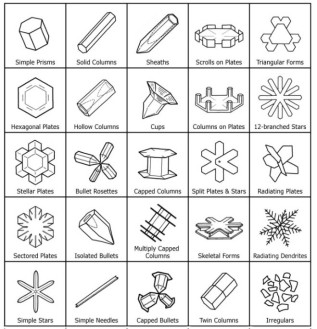 Ice needles are snow crystals, still with six sides, but in the shape of long “columns” or needles. Resembling pencils, they fall when the temperature is just below freezing, from around minus 5°C to minus 10°C). On one mild winter day in Toronto, nothing but these needles dropped from the sky, covering everything from my coat to my black car with what looked like white “hair clippings.” This kind of snow is quite fluffy and develops when the cold air is drier.

Capped columns form when the weather is a little warmer. Capped columns are basically six-sided columns with two plates on their ends like two wheels on an axle.

Rimed snowflakes are partially or completely coated in tiny frozen water droplets called rime. Rime forms on a snowflake when it passes through a super-cooled cloud. 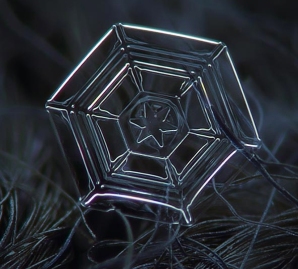 Russian photographer Alexey Kljatov created an ingenious and inexpensive DIY camera rig capable of capturing excellent close-up pictures of snowflakes. His setup includes a board, a screw, some tape, a piece of glass and the lens from an old Russian camera. Alexey describes his creation on his blog Keys to December (Chaotic Mind). Briefly, it features a Canon Powershot A650 and a 44M-5 Helios lens from an old Russian Zenit camera taped backwards to a board.

Alexey has captured impressive images of snowflakes that include most of the forms I described above. His images are simply spectacular.

Alexey describes where he shoots this way: “My shooting place is open balcony of my house. Less than half of it covered by roof, other part is under open sky. When the snow is light, i photograph on the open part, choosing the most beautiful and interesting snowflakes fell on the background, and clean background periodically, when it becomes covered by snow. When snowfall is heavy, usually I photograph under the roof, bringing the background under the snow to catch the new crystals. I was lucky that I have such nice place, where nobody disturbs me and I can return into the house when I freeze.”

Alexey has made his images freely available for people to share (without profit) on the Internet. His high res images are also available for a reasonable price. Alexey also endorses a 9×9” size 304-page hardcover book about snowflake photography, written by Canadian professional photographer Don Komarechka. Besides techniques on photography, the book, says Alexey, also includes the science of snowflakes and why we find them beautiful.

Some of Alexey’s beautiful photographs are featured in my book “Water Is…The Meaning of Water“.

This article uses excerpts from Water Is… (Pixl Press), due April 2016.

Alexey Kljatov lives in Moscow, Russia. From childhood, Alexey devoured a sci-fi and fantasy books by many Russian and foreign authors, and that interest has not waned. Since school, he’s maintained a keen interest in computer programming, studying Assembler, Turbo Pascal and Turbo C languages, and played a bazilion computer games (mainly RPG’s, strategies and first-person shooters). He is an assistant in computer and chemistry classes in a local school. Photography is just a hobby for him, he says. He got interested in photography only when digital cameras became good and cheap enough, and macro photography become his main interest. In the beginning, his subjects were bugs, butterflies and flowers, but then he tried snowflake photography; then snow crystals become his main subject.

Snow pillows in Manning Park, BC (photo by Nina Munteanu)