Ecologists, the World Bank and insurance companies share one thing in common: within a turbulence of climate change controversy and denial by certain politicians and corporate mavens, they get it.

They get climate change. Insurance companies in North America have dropped thousands of East Coast customers and raised rates on the rest—in part resulting from climate predictions. Ecologists have been modeling exponential climate-induced ecosystem behaviour for decades. The World Bank recently indicated that they would no longer fund fossil fuel energy (after 2019), strongly supporting renewable energy such as wind, solar and geothermal.

But building and landscape architects, planners and engineers “don’t seem to have connected the dots,” write landscape architects Kristina Hill and Jonathan Barnett in Harvard Design Magazine. It’s one thing to ignorantly deny climate change and its effects with the claim that the Chinese manufactured the term to drive up competition; it’s quite another to acknowledge climate change but ignore its effects by continuing to do things the same

way. We still see active condo development over the barrier beaches of Florida’s eastern shore; the Pudong district rises from the marshes in Shanghai; and glass towers colonize newly formed islands off the coasts of Dubai and Abu Dhabi.

“No matter what happens in the world of politics, sea levels are going to rise faster in our lifetimes than they have since before the first cities were built,” add Hill and Barnett.

To return to our seemingly “head in the sand” scenario, Hill and Barnett provide an explanation for why many colleagues in their profession and related professions are doing little about preparing for climate change. “We are used to thinking of the environment as something that changes very slowly, if at all, and are confident that modern engineering can solve just about any problem.” This mindset isn’t prepared for the coming scenarios: 40 million people uprooted as Shanghai floods and Dubai’s artificial islands disappear; all of Florida south of Orlando swept out to sea.

Hill and Barnett suggest that there are three ways of dealing with the effect of rising seas on coastal development: 1) move development away from the shore, restoring the shoreline to a state that will accept the fluctuations of rising tides and storm surges (best alternative for individual homes in vulnerable locations, but a last resort for whole cities): 2) raise development above flood levels in their current place. Raising the elevation of a whole urban district can work, say the authors, although it is expensive and requires coordination of public and private investment; 3) protect coastal development with a combination of wetlands restoration, flood walls, and pumps. A version of this strategy (minus the significant wetland restoration) failed in New Orleans. While some engineers are thinking in terms of enormous barriers, some architects are thinking of altering buildings instead.

Regarding the third option, Hill and Barnett describe a horizontal rather than vertical plain (e.g., walls, mechanical barrier arms, levees, houses on stilts) to address sea-level rise and associated storm surges. They suggest a living coastal infrastructure that would support marine ecosystems and also absorb some wave energy and flood water and allow that new coastal infrastructure to migrate inland as sea levels rise. They cite the statistic that for every five miles of (functional) coastal wetland a foot of storm surge is absorbed and reduced. However, most of the heavily populated coastal areas don’t have the capacity to restore and construct such wetlands. Moreover, much needed light for marsh vegetation growth is usually blocked by turbid water from storm-water runoff and outfalls.

What Hill and Barnett propose is as brilliant as it is apparently ridiculous: build artificial floating marshes and reefs. This brings to mind some of French architect Vincent Callebaut’s imaginative designs for the future. Hydrogenase is a floating algae farm with vehicles that recycle CO2 for biohydrogen. Lilipad is described as a “floating ecopolis for climate refugees.” 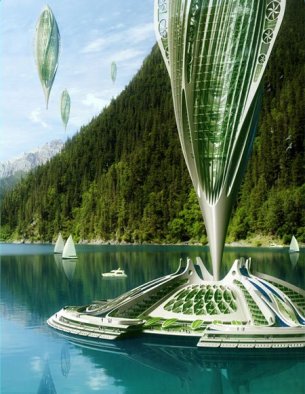 In an article called “10 Architectural Schemes That Could Help Us Adapt to Rising Seas” the Smithsonian discusses a variety of possibilities from a floating house to a mobile city shaped like a giant lilypad (yes, that one is Callebaut’s).

Each year, the Fondation Jacques Rougerie (named after the French architect who made a specialty of marine habitats) awards a Prize for the best project in “Architecture & Sea level rise”. In 2012, it went to Koen Olthuis, Mahtab Akhavan, Laura Weiss and Alexandre Voegelé for the project Thalassophilantropy: “floating urban components to address rising water challenges threatening communities in need”, mainly people living in slums by the shore. As the Foundation says on its website, “this project aims to rethink the poor urban neighbourhoods of seaside cities.”

Koen Olthuis and his team offer their solution for rising sea levels: Embrace the water by incorporating it into our cities; creating resilient buildings and infrastructure that can handle extreme flooding, heavy rains, and higher water. Countries like the Maldives and Kiribati must build oceanside or move to escape rising sea levels; New York must learn to battle storm surges, and Jakarta deals with massive flooding. “Embracing water may be our only option for survival,” says Olthuis.

The Dutch have a long history of dealing with the sea. Half of the country currently exists below sea level. Some wisdom can be gained from their experiences, successes and failures.

One thought on “Climate Change: Designing for Sea Level Rise”