Turning Cities into Sponges: Viewing The City as a Living Organism

The warming of the planet’s atmosphere is causing water to move more quickly and disruptively through the global water cycle. Extreme events are occurring more frequently. Flood, drought, fire, wind and storms. Instabilities in the water cycle are increasing.

“Turenscape”, an example of a sponge city design

These are system events. Looking at sites in isolation, as has been the traditional engineering approach, is not effective. An approach that addresses how systems work together will succeed. As the water cycle changes with climate change, we can adapt to those changes. This entails understanding how water behaves through a watershed landscape, its streams and foreshores, groundwater aquifers and so on. And how we can work with that behaviour—not prevent it.

Brigid Delaney of The Guardian writes, “These days, urban planning that doesn’t factor in some sort of catastrophic weather event is like trying to build something in a fictional utopia. For Kongjian Yu, one of the world’s leading landscape architects, the answer to coping with extreme weather events actually lies in the past.” To a time and a wisdom when we worked with nature rather than against it.

Zhongshan Shipyard park as part of a sponge city project

Yu, who is the dean of the school of landscape architecture at Peking University, reintroduced ancient Chinese water systems to modern design. Yu’s “sponge city” model has transformed some of China’s most industrialized cities into green architecture, writes Delaney. Put simply, a “sponge city” works with nature to absorb, clean and use the water rather than channeling away rainwater. The Chinese government adopted Yu’s “sponge city” model as an urban planning and eco-city template. In 2013, at China’s Central Government Conference on Urbanization, President Xi Jinping injected a new term into the global urban design vocabulary when he proclaimed that cities should “act like sponges” and launched China’s Sponge City program. His proclamation came with substantial funding to experiment with ways cities can absorb precipitation. Four years later, the Senate of Berlin released its Sponge City Strategy by imitating nature and capturing rainwater where it falls.

Yu’s “sponge city model” aims to build resilience in cities faced with rising sea levels, droughts, floods and so-called “once in a lifetime” storms. These “sponge cities” replace non-absorbing concrete and steel materials with soft material and terraces that capture storm water which can then be reused. “The water captured by the sponge can be used for irrigation, for recharging the aquifer, for cleansing the soil and for productive use,” Yu said to The Guardian. Individual families collect storm water on rooftops and use balconies to irrigate their vegetable garden, says Yu. Sponge cities don’t just include buffering wetlands and restored riverbanks; they also feature green walls and roofs, permeable pavements and green buildings. The motto of the sponge city is: “Retain, adapt, slow down and reuse.” During the dry season, terraces serve as parks for residents to enjoy; during the rainy season, they flood and protect the city without needing grey infrastructure like flood walls or dykes.

Sponge cities are one example of an ecological-based or nature-based approach to city infrastructure that acknowledges a city as a living organism, dynamic and in sync with nature’s rhythms. Rachel Armstrong and Michael Weinstock discussed the importance of an ecological approach in the recent Biennial of City and Science conference in Barcelona in “The City as a Living Organism: Living Architecture:”

Living architecture is a discipline that researches and designs sustainable solutions for the environment with advanced technologies such as synthetic biology, living systems engineering and intelligent chemistry. It sets out to develop built environments with qualities similar to life (they can evolve, learn and respond), kind and empathetic with those who live in them, and to face up to the imbalance between the waste it produces and the resources missing from its surroundings.

The result of this different view is a new kind of architectural practice that enables cities to behave more like an evolving ecosystem than like an inert and harmful artefact. In the future, new architectural designs will contribute to lessening the consequences of climate change.

Turenscape, an example of a sponge city design

There are many reasons why this is an advantageous way to approach a city and its infrastructure. Perhaps the key reason is in demonstrating humanity’s ability to adapt in a rapidly changing climate of extreme weather. Such improved city landscapes for healthy living promise to reconnect us with the invigorating aspects of nature and our changing landscape.

Yu’s sponge city design uses strategies based on peasant farming techniques. His model adapts peasant irrigation systems to urban environments and adapts buildings to a monsoon climate. The first strategy is to “contain water at the origin, when the rain falls from the sky on the ground. We have to keep the water [recharging our aquifers].”

Yu, who grew up on a farm and later studied architecture at Harvard, contends that one thing he learned “is to slow down the process of drainage.” Modern engineering has traditionally involved draining water from a flood as fast as possible; the use of concrete channels, straight conduits, dykes, and pumps, etc. speed up drainage. Slowing the water will nurture the habitat and biodiversity, argues Yu.

In a previous article of mine on designing for sea level rise, Dutch architect Koen Olthuis and his team offer a solution similar to Yu’s “sponge cities” for dealing with rising sea levels: Embrace the water by incorporating it into our cities; creating resilient buildings and infrastructure that can handle extreme flooding, heavy rains, and higher water. Countries like the Maldives and Kiribati must build oceanside or move to escape rising sea levels; New York must learn to battle storm surges, and Jakarta must deal with massive flooding. “Embracing water may be our only option for survival,” says Olthuis, who promotes “floating city apps” in evolving cityscapes to exploit opportunities and address flood-prone areas arising from changing climate, storm surges and sea level rise. “It will change the DNA of cities,” Olthuis said of the technology at the heart of his organic designs.

Landscape architects Kristina Hill and Jonathan Barnett suggest in Harvard Design Magazine a living coastal infrastructure that would support marine ecosystems and also absorb some wave energy and flood water and allow that new coastal infrastructure to migrate inland as sea levels rise. They cite the statistic that for every five miles of (functional) coastal wetland a foot of storm surge is absorbed and reduced. However, most of the heavily populated coastal areas don’t have the capacity to restore and construct such wetlands. Moreover, much needed light for marsh vegetation growth is usually blocked by turbid water from storm-water runoff and outfalls.

What Hill and Barnett propose is as brilliant as it is apparently ridiculous: build artificial floating marshes and reefs. This brings to mind some of French architect Vincent Callebaut’s imaginative designs for the future. Hydrogenase is a floating algae farm with vehicles that recycle CO2 for biohydrogen. Lilipad is described as a “floating ecopolis for climate refugees.” 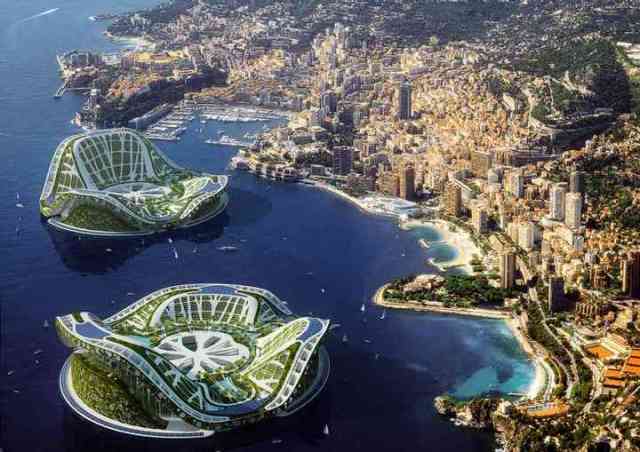 In an article called “10 Architectural Schemes That Could Help Us Adapt to Rising Seas” the Smithsonian discusses a variety of possibilities from a floating house to a mobile city shaped like a giant lilypad (yes, that one is Callebaut’s).

concept of resilient design for East River, NYC, during a storm

“Sponge Cities”—a catchy way to describe the goal in restoring the capacity of the urban landscape to absorb water and release it naturally.

Nina Munteanu is a Canadian ecologist / limnologist and novelist. She is co-editor of Europa SF and currently teaches writing courses at George Brown College and the University of Toronto. Visit www.ninamunteanu.ca for the latest on her books. Nina’s bilingual “La natura dell’acqua / The Way of Water” was published by Mincione Edizioni in Rome. Her non-fiction book “Water Is…” by Pixl Press(Vancouver) was selected by Margaret Atwood in the New York Times‘Year in Reading’ and was chosen as the 2017 Summer Read by Water Canada. Her novel “A Diary in the Age of Water” will be released by Inanna Publications (Toronto) in 2020.