Water Is… The Consequences of How We Value Things

Ecologists and environmental activists provide eloquent and convincing reasons for the preservation and conservation of pristine natural water in aquatic ecosystems and watersheds throughout the world. Excellent works devoted to water’s rights and people’s rights to water have followed humanity’s journey with water throughout the ages; others have documented our social, political and economic struggles that have impacted water in many ways.

It’s been my experience, however, that knowing and feeling a truth are not the same; one leads to vehement agreement but seldom to action; the other leads to quiet resonance and often to quiet action. Before you act you have to care. A lot.

Some will argue that the best way to solicit an appreciation for something is to give it an economic value. My experience with this argument is that it’s a slippery road. Economists, sociologists and politicians will suggest that the only way to protect water is to treat it as a commodity—to put a price on it. However, when something is assigned an economic value, its value becomes relative and compartmentalized; it loses an essential part of its perceived intrinsic value.

Scholar and writer Charles Eisenstein gives us four good reasons to shy away from evaluating anything—particularly Nature and water—economically. First, this view favours competition within a perception of scarcity as individuals seek to maximize self-interest. Second, competition and a perceived need for growth promotes the objectification of Nature as something separate from us, leading to abuse and the “Tragedy of the Commons.”  Third, valuing all things in a utilitarian and self-serving frame instils a dominating worldview through a “Conquest of Nature” ethic. And finally, this value system “echoes science’s onward march of quantification by converting a multiplicity of often qualitative values into a single metric of value called money.” It applies a reductionist approach to a holistic phenomenon. When that happens, we lose the meaning of the thing that we’ve turned into an object.

For most of us, perhaps chemists aside, when we think “water” we envision its archetype of liquid flowing in rivers, brooks, gurgling springs and surging oceans. We envision myths from the ancient creation stories to the current thoughts of today or of sacred rituals of which it plays an integral part. We think of its refreshing crystal clarity as the matrix of life. Water is “not a personality but more like a culture to itself, with laws, arts, and a unique history and geography,” says science writer Philip Ball in the preface to his book, H2O: A Biography of Water. Water’s “public persona” has co-evolved with humanity through our various cultures and philosophical beliefs, fashion, and political and social change. Yet, throughout the millennia, water has remained water; it is we who have changed.

Water is a catalyst.

“We cannot avoid the conclusion that for humankind water is a force of social change—a precious resource to be treasured, nurtured and used wisely,” adds Ball. But water is far more than this; it is far more than “resource”, as Ball himself acknowledges in the very last page of his book, where he writes, “understanding water’s physics, chemistry, geology and biology can provide only a part of the answer,” and speaks to the wisdom of a relationship with water that lies outside science.

In that vein, I ask you to keep an open mind when reading these chapters (of “Water Is…).

Some of what I write about may present itself with an appearance of what some call soft science, fringe science or even pseudo-science. Read these pages equally with your soul and heart as with your mind. Read the words as they flow along the pages and let them touch your heart with deeper truths felt in your soul. I’m asking you to turn off your phones and calculators and listen with your heart for what is deep inside you.

This article is an excerpt from “Water Is…, ‘Ecology, Schrodinger’s Cat & the Holo-Universe’ (pg 20). 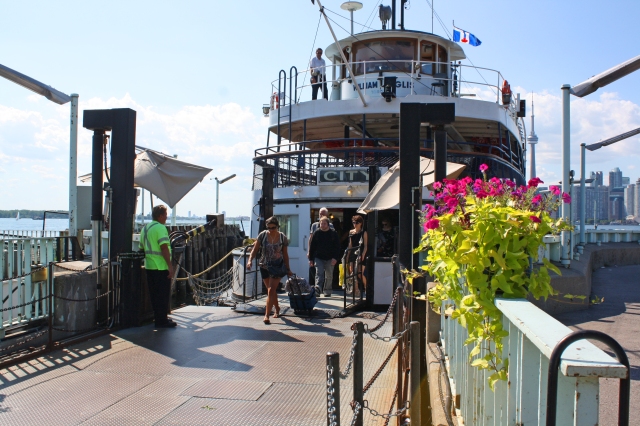 The ferry to Ward Island, ON (photo by Nina Munteanu)