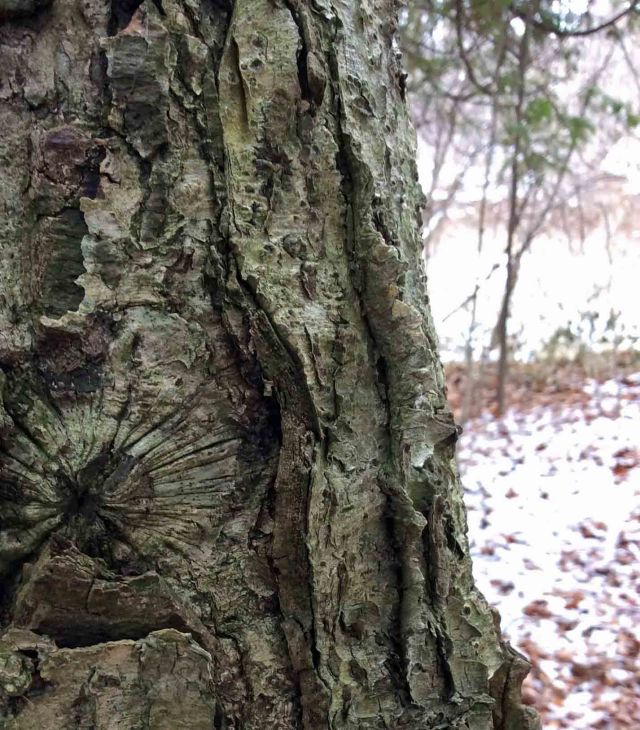 Yellow birch in the Little Rouge woodland, ON (photo by Nina Munteanu)

A few days ago I walked along the Little Rouge River, looking for signs of an emerging spring. The woodland is one of the few remaining intact Carolinian forests in southern Ontario and a good showcase of this mixed forest biome. I went my usual way, off the beaten track through still-dry marsh then along the main path along the river, to visit my tree-friends. Straight ashes and poplars. Gnarly-branched maples. Sturdy thick oaks and shaggy-barked willows. Crowds of smooth beeches. And stately tall cedars, their dark green branches draped like long dresses and their feet curling like sculptures into the ground. 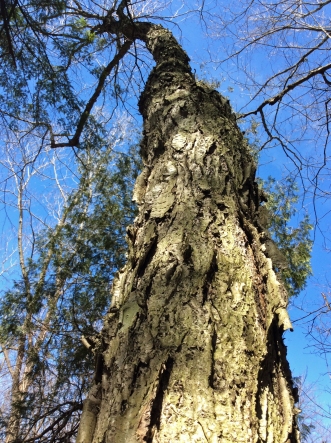 Midway along, I had to stop. An old yellow birch beckoned this time. The late afternoon sunlight shone just right upon it—dipping it in gold. My birch was in its glory.

The yellow birch (Betula alleghaniensis) gets its name from its yellow-gold bark. My old yellow birch stood close to the river along with poplar, pin cherry and maple. A sloping mixed stand of cedar, hemlock and pine, formed its backdrop. My birch stood fairly straight, with a narrow crown, some seventy feet high. Its bark was a varying topography of thick plates, fissures, and bands of still-peeling thin bark.

So, I looked closer … and closer …

And found a world … 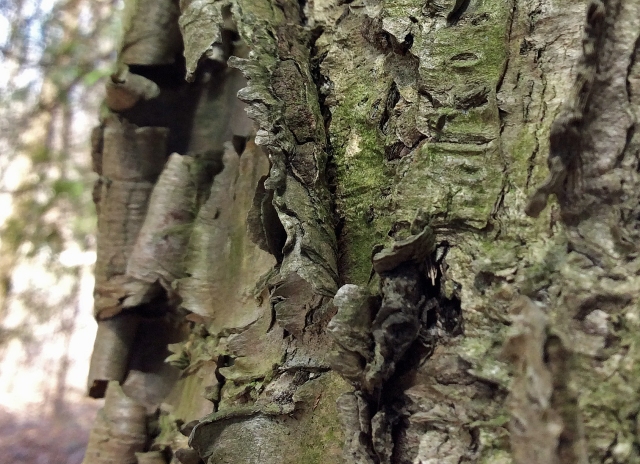 The yellow birch is considered a medium-sized tree that grows slowly and lives about 150 years. It is the largest of the birches native to Ontario. The bark starts out thin, shiny, and reddish-brown, becoming dull yellow with age, and darkening to a bronze-colour when mature.

The bark of a young yellow birch flakes and peels in horizontal strips that are fine like paper. Once the tree matures to a diameter greater than 1 foot—like my birch—the bark thickens into shaggy plates; it stops peeling and instead shreds, creating a landscape of texture and form just right for lichen, moss and other life forms to make their home. The dark horizontal lenticels act as pores for gas exchange. 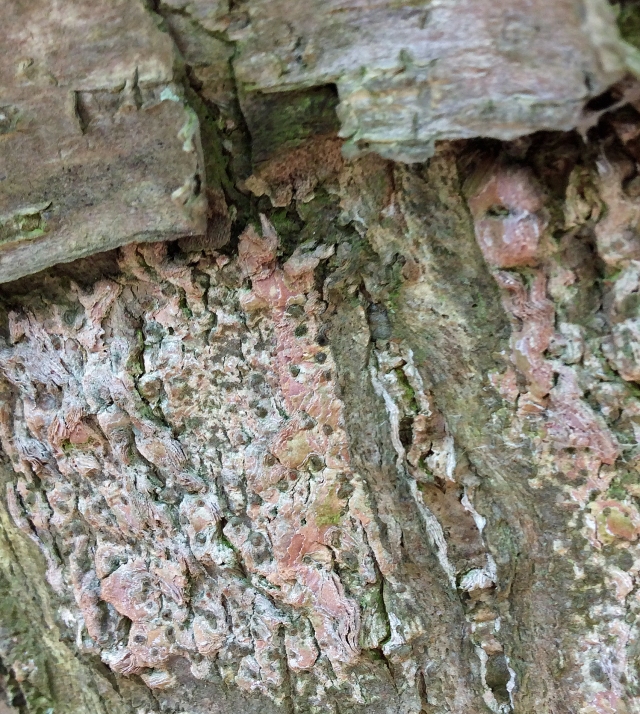 The aromatic yellow birch is most common in the mixed hardwood forests of southern Quebec, where I went to university and studied botany—it remains one of my favourite trees. I first learned to identify the yellow birch during a field botany course at Concordia University in Montreal. Professor Hans Rueber showed us that if you scrape the yellow birch twig with your finger nail or your teeth, it will release the subtle scent of wintergreen (methyl salicylate) in the twig. The sweet birch (B. lenta) also contains the oil but more prominently. 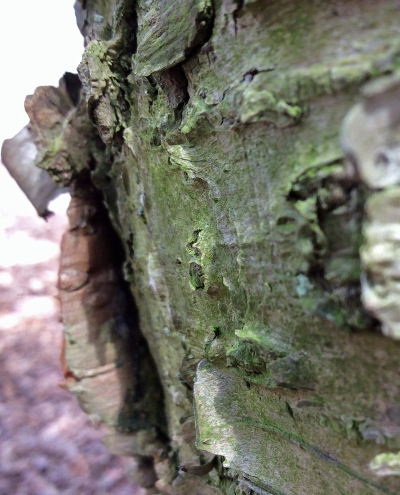 The yellow birch often associates with beech, sugar maple, basswood, eastern hemlock, balsam fir, eastern white pine and several spruces. All trees I observed in the Little Rouge forest. Yellow birch is called a persistent successional species; it tolerates shade but does not thrive in it and is an opportunistic tree, producing abundant small seeds and depends on local disturbance. The tree cannot reproduce under a closed canopy and requires soil disturbance and light for seedling survival. 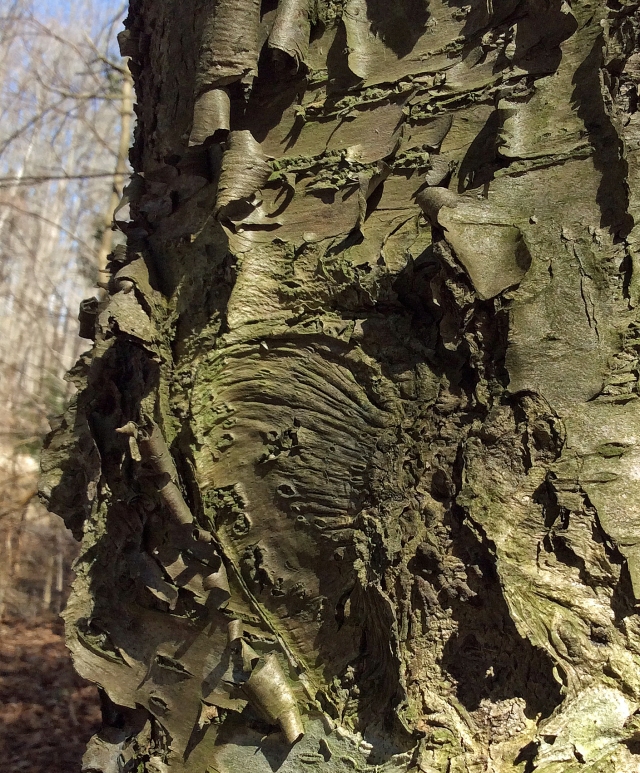 The sap of yellow birch can be tapped for use as edible syrup. Tea is sometimes made from the twigs and inner bark. If you make tea from yellow birch twigs, Russ Cohan of “Northern Woodlands” suggests not steeping the scraped twigs in hot water (as the volatile oil will escape) but using room temperature water over several hours. Chewing on yellow birch twigs can also help with pain. Says Cohan:

“Another use for birch is as a natural pain killer. Methyl salicylate is related to salicylic acid, the active ingredient in aspirin, and it has a similar pain-killing effect (in fact, methyl salicylate is one of the active ingredients in Bengay liniment). So, if you are out in the woods this spring and twist your ankle, consider chewing on a black or yellow birch twig. At the very least, the taste will distract you from the pain, and you’ll limp home with fresh breath.” 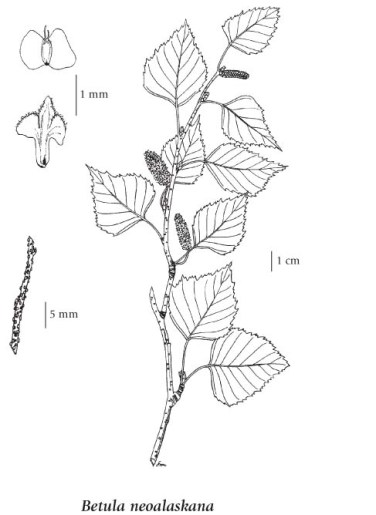 Yellow birch reproduces mainly by seed, which is spread by wind after the seed falls in the cold of early winter. The mature seed cone contains numerous three-lobed hairy scales and each scale houses a 2-winged nutlet. The cold wind scatters them like confetti up to 400 metres away. I remember seeing the spray of tiny brown seeds on the fresh snow of early winter in Quebec, as I explored the local woods behind our house. The abundant seeds are an important food source for many winter birds, including American goldfinch, pine siskin, northern junco, blue jay, chickadees and sparrows. Ruffed grouse feed on seeds, catkins, and buds.  Red squirrel cut and store mature strobili, eat yellow birch seeds, and feed on birch sap.

Very soon—sometime this month—the yellow birch buds will swell then burst with flowers. Then the leaves will emerge and undergo anthesis and full emergence in a show of diaphanous spring green. As fall nears in August and September, leaves will begin to fall. Pistillate catkins develop in late summer and stay on the tree all winter, shedding pollen the following spring. The mature seed cone with its three-lobed hairy scales and 2-winged nutlet scatters in the cold wind of winter. The catkin axis with its scales often remains on the tree over winter.

3 thoughts on “The Yellow Birch—a Study”