Eco-Heroes: On Giraffes and Women Scientists 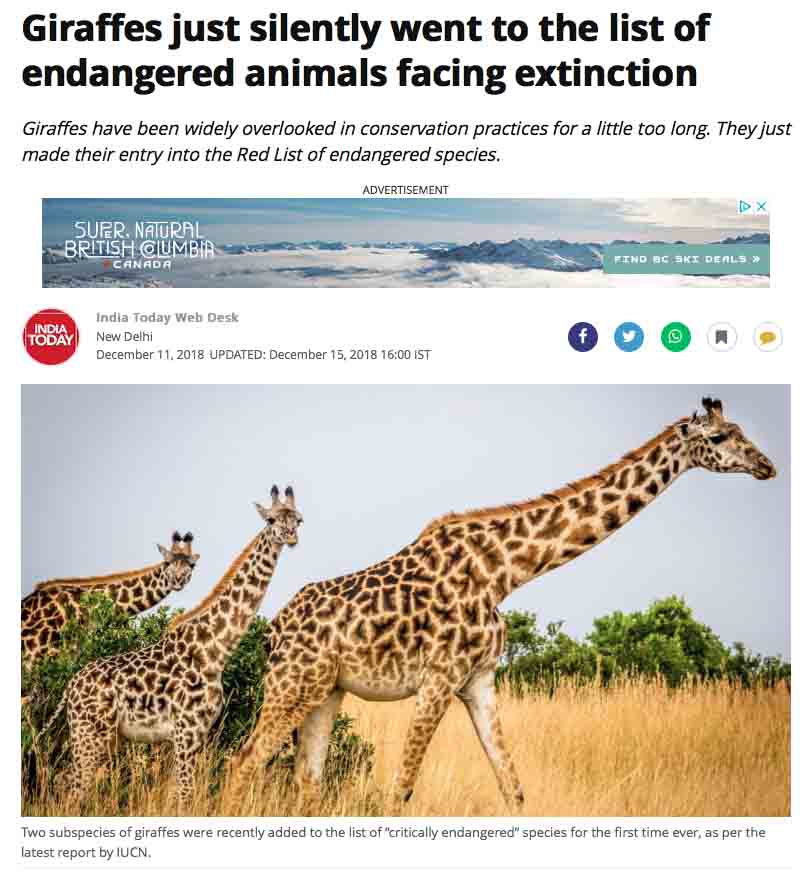 In a recent article, India Today reported that giraffes “just silently went to the list of endangered animals facing extinction.”

Giraffes had been widely overlooked in conservation practices, they said. Then, like many other species, the IUCN moved the giraffe from the list of “Least Concern” to that of “Vulnerable” status in their Red List of Threatened Species—for the first time ever. Three of the nine subspecies of giraffes were recently added to the list of “Critically Endangered” species. Reasons for their decline and endangered status include habitat loss through expanding agriculture, human-wildlife conflict, civil unrest and peaching for their meat, pelts and tails.

The giraffe is not alone in being ignored. “Canada’s ‘Jane Goodall of giraffes’ was ignored for decades, because she was a woman,” writes the Toronto Star.

In 1956, four years before Jane Goodall ventured into the world of chimpanzees and seven years before Dian Fossey left to work with mountain gorillas – in fact, before anyone, man or woman had made such a trip – 23-year-old Canadian biologist, Anne Innis Dagg, made an unprecedented solo journey to South Africa to become the first person in the world to study animal behaviour in the wild on that continent. When she returned home a year later armed with ground-breaking research, the insurmountable barriers she faced as a female scientist proved much harder to overcome.

The 2018 documentary called “The Woman Who Loves Giraffes” directed by Alison Reid follows Innis Dagg’s long and often harrowing journey that included the factors that destroyed her career and the forces that brought her back. It is by turns a sad commentary on how women have been mistreated in Canadian academia in the 1950s through to the 1970s (and much more recently even!) and how personal triumph in passionate pursuit have prevailed. The documentary also captures Anne Innis Dagg’s recent return at age 86 to some of the happiest moments of her life and to the giraffes in Fleur De Lys, South Africa, six decades after her groundbreaking research there. During her research there, the young Innis Dagg spent hundreds of hours inside her car—which acted as her blind—observing giraffes without them noticing or being disturbed by her presence. Her car was a second hand Ford Prefect, which cost her $200 and which she named Camelo, short for the giraffe’s scientific name, Camelopardalis. 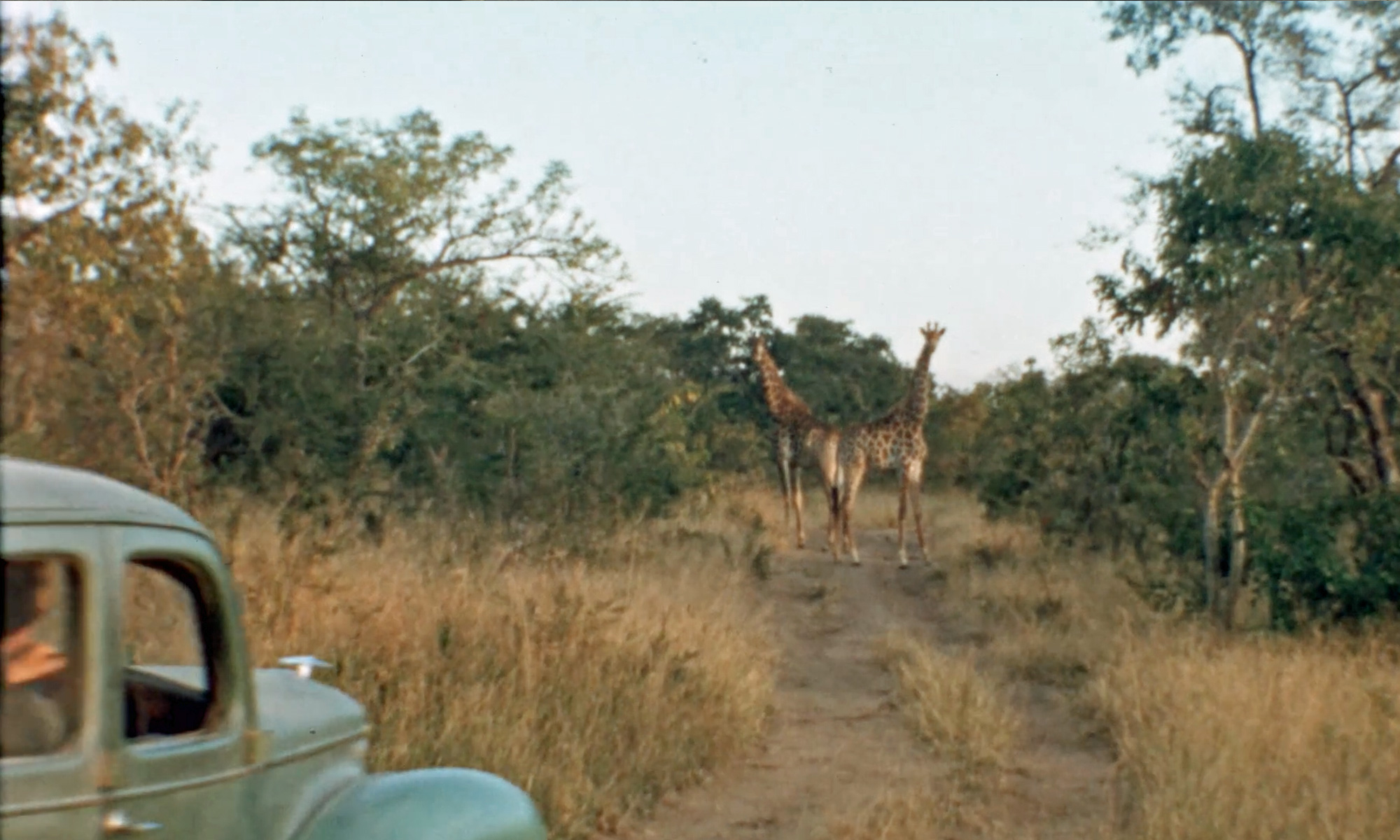 Innis Dagg was the first zoologist in the world to study giraffes in the wild — and is still considered one of the planet’s foremost experts on the species.

Bryan Carney of The Tyee writes:

It’s easy to underestimate how groundbreaking her mission was. It was almost unheard of for a biologist to study the behaviour of animals in their natural state in the wild, unaware of and undisturbed by human observers. And the idea of a young woman on a solo research mission to South Africa was equally unprecedented. This was four years before Jane Goodall began her well-publicized African research, which, Innis Dagg notes, often failed to meet the standards for non-interaction or interference that she set for her own work.

In 1972, having published 20 research papers as an assistant professor of zoology at University of Guelph, the Dean of the university denied her tenure. She couldn’t apply to the University of Waterloo because the Dean there told Anne that he would never give tenure to a married woman. For three decades, Anne Innis Dagg was absent from the giraffe world until 2010 when she was sought out by giraffologists and not just brought back to into the fold, but finally celebrated for her work. 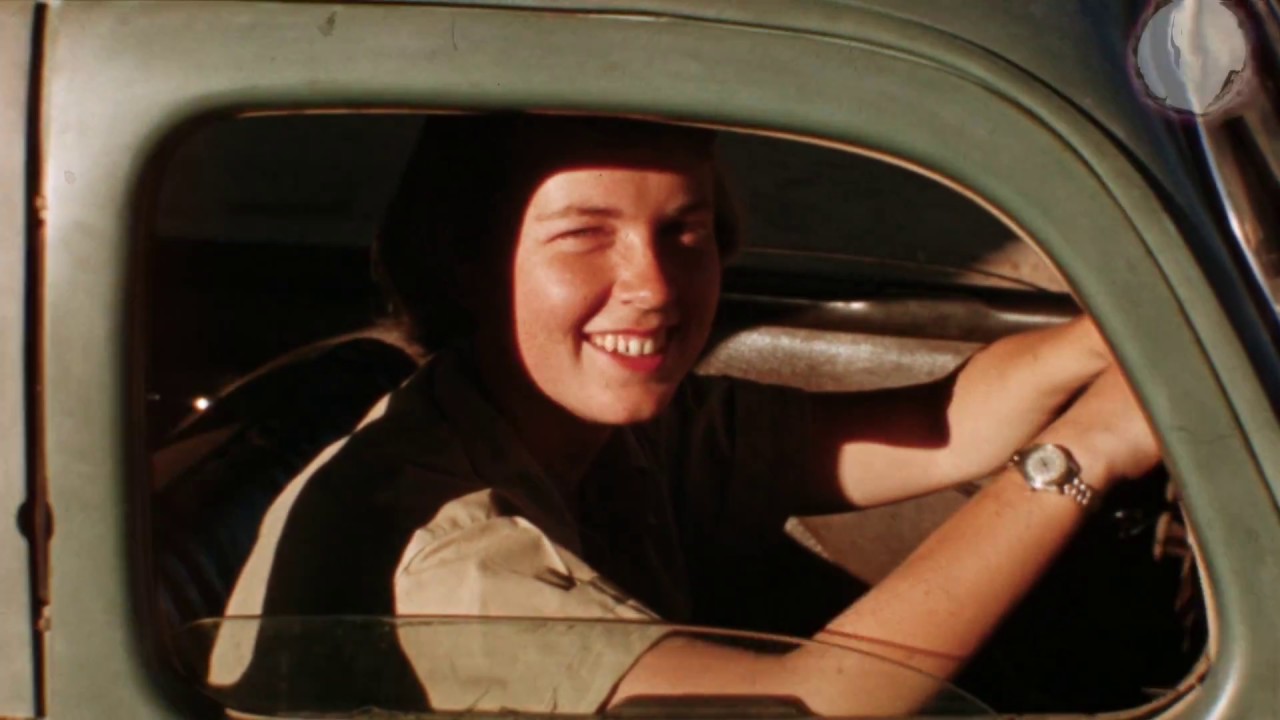 The first time I spotted her, Anne Innis Dagg was sitting alone on a small settee in the middle of a springtime party at a posh downtown Toronto hotel, oblivious to the glittering swirl surrounding her. While many of the other guests were in silks and heels, Innis Dagg wore slacks, sensible shoes and a short-sleeved yellow T-shirt decorated with giraffes. Rather than nibbling on canapés, schmoozing and sipping good wine, she was absorbed in a tattered newspaper.

That’s Innis Dagg in a nutshell: she marches to her own beat. And that has led her to a curious life of extraordinary scientific firsts and extraordinary obscurity. Widely considered the founder of giraffe science, she was the first to study the giraffe in the wild; the first zoologist to study any African animal in the wild; an inventor of the scientific discipline of behavioural biology; and, more than six decades and copious academic papers and books later, still one of the world’s leading experts on the giraffe, Giraffa camelopardalis.

“You can’t be a giraffe researcher unless you’ve read her book,” says Fred Bercovitch, a zoologist who is executive director of the Texas-based group Save the Giraffes. 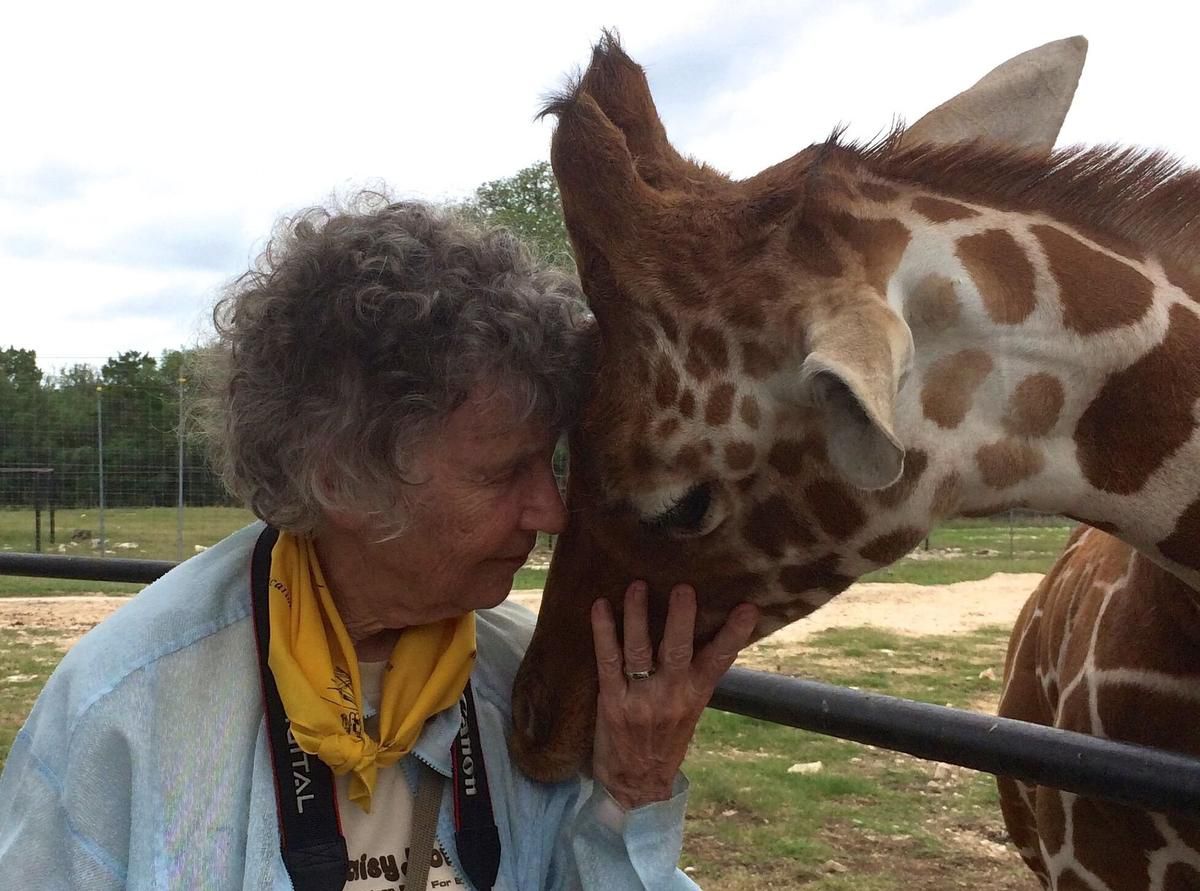 But partly because she has been in the vanguard — and partly because she chose to study an eccentric ungulate rather than a cuddly primate — those accomplishments have not brought her decades of fame. While generations of zoologists have relied on her scientific work and quoted her in their publications, the woman herself has lived resolutely out of the limelight in Waterloo, Ont. She has languished in part-time academic jobs with no tenure, applying her bacon-slicer of a mind to studies on everything from feminism to literature to camels to animal rights.

In 2016, the international scientific community discovered, to its astonishment, that the giraffe is vulnerable to extinction. As conservation scientists race to save the species — and several of the nine or so subspecies that are in terrible peril — Innis Dagg, now 86, is at last getting her due. And so is the giraffe. 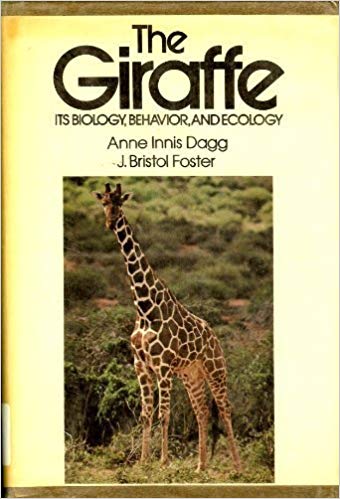 Both the world’s first ‘giraffologist’, whose research findings ultimately became the foundation for many scientists following in her footsteps, and the species she loves have each experienced triumphs as well as nasty battle scars.

Anne’s research culminated in many scientific papers and the book The Giraffe: Its Biology, Behaviour and Ecology, (co-written with Bristol Foster in 1976). Referred to today as the “bible on giraffes” by scientists, conservation biologists and zookeepers worldwide, it is the most influential book on the species ever written.

The giraffe has unfortunately crept into the endangered list for extinction. Here’s how you can help:

Nina Munteanu is a Canadian ecologist / limnologist and novelist. She is co-editor of Europa SF and currently teaches writing courses at George Brown College and the University of Toronto. Visit www.ninamunteanu.ca for the latest on her books. Nina’s bilingual “La natura dell’acqua / The Way of Water” was published by Mincione Edizioni in Rome. Her non-fiction book “Water Is…” by Pixl Press(Vancouver) was selected by Margaret Atwood in the New York Times‘Year in Reading’ and was chosen as the 2017 Summer Read by Water Canada. Her novel “A Diary in the Age of Water” will be released by Inanna Publications (Toronto) in May 2020.

This article is part of a series of posts that will feature an eco-hero in the singular altruistic act of helping this planet cope and heal from the self-serving, unkind and cruel actions of a humanity pre-occupied with itself. I hope you will join me in celebrating the selfless actions of these individuals on behalf of Gaia.

2 thoughts on “Eco-Heroes: On Giraffes and Women Scientists”