The Peel Art Gallery Museum (PAMA)—located in Brampton Ontario—is currently running the Morphology Exhibition in its gallery.  The photography exhibition celebrates the late Jim Tovey’s dream of creating a 26-hectare park and marsh on Mississauga’s Lake Ontario shore that will connect the Waterfront Trail with Lake Ontario’s shorefront for the public. Several dozen photographs that document the annual and seasonal changes of the developing marsh occupy the well-lit gallery. Several quotes dot the display, including one from the Honourable Elizabeth Dowdewell and Andrew Farr (Commissioner of Public Works), as well as a quote from my book “Water Is…” (Pixl Press, 2016). 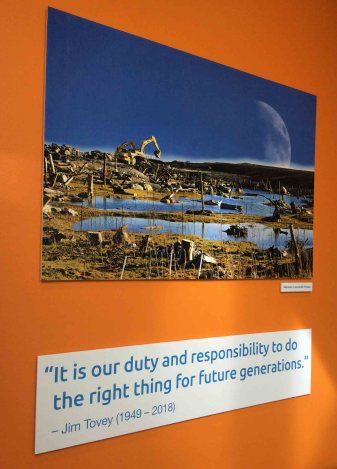 The larger than life photographs command attention through light, form and unique perspective. I am drawn into their complex narrative of morphing shapeshifters, flowing humours and tricksters in the night. Panoramas that stretch over giant muddy holes depict an evolution of landscape from wet to dry to wet again. Tree bole, rock and rebar form bizarre companions in murky pools that harbour life finding itself. Piles of giant boulders shout their presence to a stormy lake. A frontend loader sits peacefully beneath a glowing sunset. Slopes of wild herbs reach into ponds as if looking for hidden treasure.  Mangled rebar contorts in a frozen ice-dance.

The photographs provide a range of perspectives over the seasons on the early phase of the marsh construction that feature aquatic habitat structures built four metres below the level of Lake Ontario. The late Councillor Tovey had earlier said of the construction project: “It sort of looks like a Salvador Dali surrealistic sculpture garden…and what an interesting way to really celebrate all of this.” 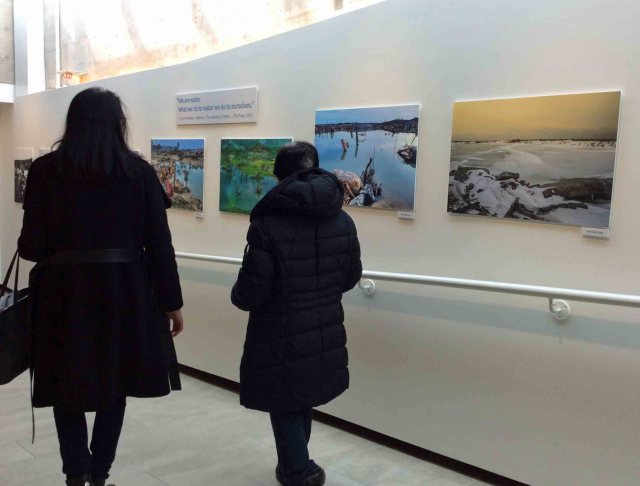 Construction of the site and marsh began in November 2016 and is ongoing and expected to continue until 2024-2026, when the site will be opened to the public. Starting in 2017, the eleven photographers toured the site to capture the seasonal and annual changes of the developing wetland. I was also invited to tour the site to glimpse a moonscape of dirt and clean rubble as dozers pushed material out to form cells and reclaim marsh habitat from open lake. 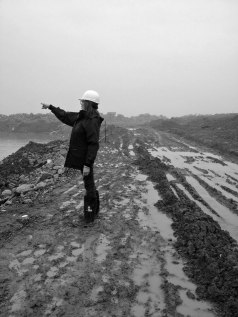 Lee Tovey at the marsh construction site in 2017

In November of 2017, I walked the undulating “moonscape” with Lee Tovey and Zoe Danahy. Rolling berms snaked around pooled and dry depressions that disappeared in the fog. The smell of rain and mud pervaded as we set out in ankle-deep mud toward the snaking berms. I scrambled over rip rap chunks larger than me to glimpse Lake Ontario—its new shoreline re-imagined. Beyond, the lake vanished in a veil of fog. I was told that on a clear day you could see the Toronto Waterfront and the CN Tower. All I could make out was a few ghost trees that marked the nearby eastern shoreline.

As I gazed over the brown monochromatic landscape, I imagined a tapestry of greens in Councillor Jim Tovey’s vision: 26 hectares of future wetlands, forest and meadow and beach spanning the Lake Ontario shoreline from the old Lakeview generating station to the Toronto line at Marie Curtis Park. Part of the Inspiration Lakeview development, the marsh and wetland park have now been named The Jim Tovey Lakeview Conservation Area.

The shores of Lake Ontario were once quilted in rich wetlands: shingle bar marshes at stream and river mouths (e.g. Rattray Marsh); fringing and broad wetlands such as lacustrine open shoreline wetlands; unrestricted bay marshes and connected channel marshes. Marshes, bogs, fens, and swamps lined the lake in a network of biodiverse ecotones that provided functional buffers between the open lake and the terrestrial ecosystem. 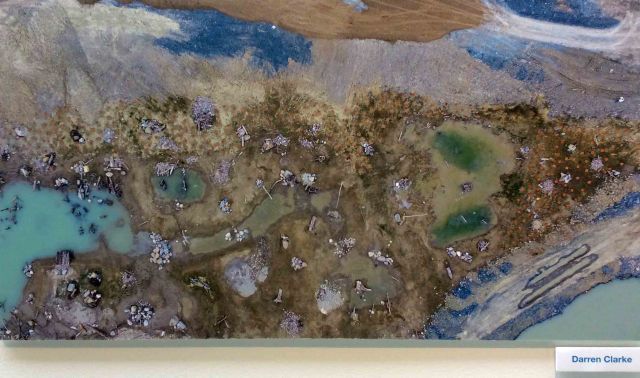 Aerial view of the marsh site (photo by Darren Clarke)

Restoration and protection of wetlands on the shores of the lake has begun and is ongoing (e.g., the 26-hectare Jim Tovey Lakeview Conservation Area; 22-hectare swamp/marsh of the Don River mouth). The trend of wetland loss, however, continues. Ducks Unlimited reports that, prior to a 1987, information on Lake Ontario’s wetlands has been fragmented and inconsistent. No one really knew what was there and in what condition. Prior to European settlement (c. 1800), over two million hectares of wetland was thought to exist in Southern Ontario; by 2002, only 560,000 ha remained—a reduction of over two-thirds. Not surprisingly, the greatest loss occurred in the Niagara and Toronto areas, where over 85% of the original wetlands were destroyed and replaced by built-up land and impervious surfaces.

Wetland loss from pre-settlement to 2002

“Wetlands located in coastal areas of the Great Lakes are especially at risk due to high development pressure in urban areas, and stresses such as lake-wide water level regulation. Conservation policies and initiatives now exist throughout the Great Lakes basin to limit further wetland losses, and restore lost area and functions. However, conservation remains an uphill battle as losses continue,” says the Great Lakes Fact Sheet. Many species of marsh birds and amphibians are experiencing declines throughout the Great Lakes basin. There are many reasons for the declines – the most ongoing and detrimental is loss of habitat. For amphibians and many birds, a loss of wetlands is a loss of their food and shelter, as well as vital sites for nesting and hibernation. Draining and filling of wetlands and removal of shoreline vegetation and tree cover poses a major threat to wetland integrity and the wildlife that depend on them.

Marshes are the most common type of coastal wetlands. Marshes are periodically or continually flooded wetlands characterized by non-woody emergent vegetation that is adapted to living in shallow water or moisture-saturated soils. They were the most prevalent wetland along the Lake Ontario shore since their vegetation tolerates—in fact requires—the large short- and long-term fluctuations in water levels that occur in the Great Lakes.

A 1996 report on coastal wetlands of the Great Lakes provides a comprehensive background to the ecology and impacts to existing wetlands along the Great Lakes. The report determined that major impacts imposed by human interference include: drainage (via ditches and dikes) for agriculture, urban and industrial land use; filling and dredging in urban areas (most of Toronto area) to convert wetland into housing, commercial and industrial use; dredging and channeling for boats, marinas and harbours; shoreline modification to prevent flooding (and erosion) through groins, dikes, revetments and breakwalls along the shore; road crossings; water level regulation; increased sediment loads; nutrient enrichment; toxic chemicals; introduction of non-native species; and climate change.

Engineers and city infrastructure planners are only now realizing the important functions of coastal wetlands in flood protection, shoreline stabilization, groundwater recharge and stream flow maintenance, water storage, and water purification. But wetlands do far more than this. Wetlands shelter and feed thousands of different plants and animals, including many that are threatened and endangered—this is no surprise, given that most endangered species have this designation because of habitat destruction. Lake Ontario marshes are potential hot spots for migratory birds and butterflies that travel up and down the North American continent between Canada and Mexico. 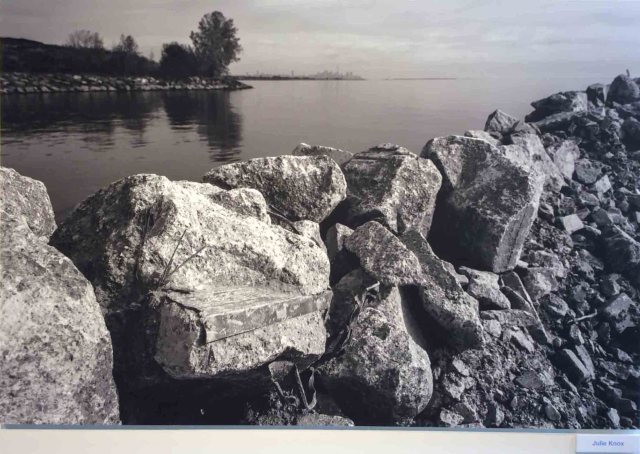 Morphology was conceived by the late visionary councillor Jim Tovey who envisioned an evolving photography and writing exhibit to follow the progress of the marsh creation project of what is now The Jim Tovey Lakeview Conservation Area. Spearheaded and nurtured by Councillor Tovey, the marsh construction was part of 26 hectares of future wetlands, forest, meadow and beach. The Lakeview Waterfront Connection will span the Lake Ontario shoreline from the old Lakeview generating station to the Toronto line at Marie Curtis Park. Part of the Inspiration Lakeview development, it will restore pedestrian and cyclist access to a previously forbidden section of the waterfront to “connect 9.5 kilometers of shoreline for water’s edge experience for the public,” said Councillor Tovey.

To celebrate the residential / park development, eleven professional photographers were invited to photograph the marsh construction during its early phases. These images, along with water-inspired narrative provided by limnologist-author Nina Munteanu, were first displayed in an exhibit during a gala event January 14 2018, hosted at the Lakeview water treatment plant. Following Councillor Tovey’s untimely passing, his wife Lee Tovey and others (e.g., TRCA, CVC, Region of Peel) are continuing the project. Morphology was displayed for the public on World Water Day, March of 2018, at the Great Hall in the Mississauga Civic Centre. Its third appearance was at the In Situ Multi Arts Festival in November 2018.