Small battles are being won around the world, but I think people are losing. I do see the present and the future of our children as very dark. But I trust the people’s capacity for reflection, rage and rebellion—Oscar Olivera

Maude Barlow, National Chair of the Council of Canadians, opens her 2013 book Blue Future with the July 28 2010 United Nations General Assembly adoption of the resolution recognizing the human right to safe and clean drinking water and sanitation as “essential for the full enjoyment of the right to life.”

“For those of us on the balcony of the General Assembly that day,” wrote Barlow, “the air was tense.” A number of countries had postured themselves to oppose it. “So, it had to be put to a vote.”

“The Bolivian ambassador to the UN, Pablo Solon, introduced the resolution by reminding the assembly that humans are composed of about two-thirds water and that our blood flows like a network of rivers to transport nutrients and energy through our bodies. Water is life, he said.”

“Then he laid out the story of the number of people around the world who were dying from lack of access to clean water and quoted a new World Health Organization study on diarrhea showing that, every three and a half seconds in the developing world, a child dies of waterborne disease. Ambassador Solon then quietly snapped his fingers three times and held his small finger up for a half-second. The General Assembly of the United Nations fell silent. Moments later, it voted overwhelmingly to recognize the human rights to water and sanitation. The floor erupted in cheers.”

Oscar Olivera’s above quote remains Germane. While the UN breakthrough represents an unprecedented victory for water justice, thanks to the tireless efforts of people like Ms. Barlow, its privatization and commodification has become all too commonplace and with serious ramifications. 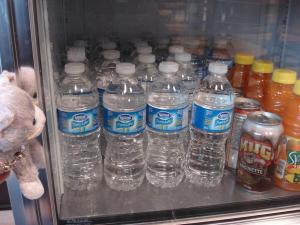 a bold proclamation: “Suddenly it is clear: the world is running out of freshwater.” They predicted that as water became the oil of the twenty-first century, water cartels would emerge, looking for profit. They were right. Within a decade, cartels like Nestle, Coca Cola, PepsiCo and many others with bottled water brands such as Dasani, Evian, Fiji, Perrier, San Pellegrino, Aquafina, Pure Life, etc. have created a hugely profitable industry on bottled water. Nestlé currently controls more than 70 of the world’s bottled water brands, among them Perrier, San Pellegrino, Vittel, Pure Life, and Polar Springs, with sales of over CHF 10 billion. Bottled water a convenient commodity for the on-the-move city dude.

Water bottling companies enter a watershed, mine its water—sometimes to the watershed’s ecological detriment—and sell the water for profit.

“Water is of course the most important raw material we have today in the world. It’s a question of whether we should privatize the normal water supply for the population. And there are two different opinions on the matter.

The one opinion, which I think is extreme, is represented by the Non-Government Organizations, who bang on about declaring water being a public right. That means as a human being you should have a right to water. That’s an extreme solution.

Personally, I believe it’s better to give food stuff a value so we are all aware that it has its price and then that one should take specific measures for the part of the population that has no access to this water and there are many different possibilities there…”

Possibilities apparently include draining the water from financially depressed regions all over the world for profit and at the expense of the local community: places like South Africa, Ethiopia and Pakistan, where Nestlé’s purchases the land surrounding the water source and negotiates a lucrative proposal (for Nestlé) with the local government and community. The watershed—and its community—often gets shafted. Nestlé’s Peter Brabeck-Letmathe developed a communications strategy whose propaganda includes noble intentions of “Corporate Social Responsibility” and “Creating Shared Value.” In truth, the company’s mandate is simply to amass resource rights worldwide with the aim of dominating the global water market of the future (which it has pretty much already achieved).

This practice is not exclusive to third world countries. The USA provides the largest market for Nestlé operations, where all the company needs to do is purchase land and pump water. Communities affected by Nestlé’s business model include: Denver, Colorado; Sacramento, California; Fryeburg, Maine; and Mecosta, Michigan. Swiss journalist Res Gehriger, researching the small towns of Fryeburg, Newfield and Shapleigh Maine for the Swiss film “Bottled Life”. He witnessed how Nestlé stifled and suppressed local opposition to its operations with an army of powerful PR consultants, lawyers and lobbyists.

“The revenue generated by these regions natural resource by and large goes to a corporation headquartered in Lake Geneva, Switzerland,” writes the Organic Prepper. “And if the financial incentives aren’t enough to assuage concerned citizens, Nestlé is more than happy to battle it out in court.”

The small Canadian town of Hillsburgh, Ontario became one of Nestle’s most recent targets for freshwater. Nestlé withdraws 1.13 million litres of water per day from a well in Wellington County, which they then bottle and sell. Initially, the province had set limits on the company’s ability to withdraw that amount during drought conditions. After “negotiations”, the Ministry of the Environment (MoE) capitulated to Nestle’s demands that their water pumping not be restricted, even as usage by the town residents remained restricted.

The Council of Canadians, Ecojustice, and Wellington Water Watchers appealed the ministry’s decision to the Ontario Review Tribunal and on August 16, 2013 the Tribunal dismissed the motion to approve a proposed deal between Nestlé and the province that would have exempted the Swiss food giant from water restrictions during droughts. Then on September 17th Nestlé announced that it was withdrawing its appeal of drought restrictions on its water permit in Wellington County. On October 8th the Environmental Review Tribunal accepted the withdrawal and closed the file.

“Sadly, the Ministry of the Environment failed to protect our communities’ water sources by negotiating a questionable settlement with Nestlé,” said Mike Nagy, chair of Wellington Water Watchers. “It took action from Ecojustice lawyers representing the Council of Canadians and Wellington Water Watchers to make it clear that this appeal was unjustifiable, indefensible and not in the public interest… Community groups shouldn’t have to put time and money into challenging the Ministry to do its job.”

“Under its current permit, Nestlé pays $3.71 for every million litres of water it pumps from the local watershed, which it then packages in single-use plastic bottles and sells back to the public for as much as $2 million,” the Council says.

Around the same time, the province of BC, where Nestlé had been withdrawing up to 265 million litres a year for free from a well in Hope, B.C., put into place a new fee structure that will charge the company 85 cents for every 1,000 cubic metres of groundwater taken.

Barlow recently added that: “Coca Cola and Pepsi Cola use city water—municipal water—then they put it through their secret reverse osmosis process, add their secret packet of minerals and sell it back to you at 11 or 12 hundred times more you pay for it from the tap.” Next time you buy a bottle of Dasani or Aquafina or even Nestlé Pure Life water, check the label; you’re buying tap water.

4 thoughts on “Water: Commons or Commodity?”